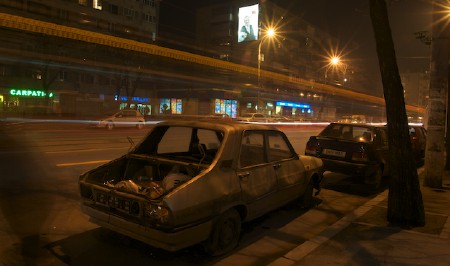 The concrete labyrinth of Bucharest’s dusty streets is not the easiest environment in which to map out a contemporary art scene. Allow a little time, though, and an inner world does reveal itself; one in which a tight circle of connected, yet independent, figures are slowly building a vibrant community. The cornerstone in all of this is the impressive Muzeul National De Arta Contemporana (MNAC), the state-funded flagship for contemporary art in Romania. While MNAC is an institution of international calibre with a vast exhibiting space, the compact size of the Bucharest art community means that its staff enjoy a relatively close relationship with both artists and the network of commercial gallerists. In this concentrated scene, you might run into a collection of key players all in the same bar.

The Palace of Parliament

The new breed has had to strive against a cultural establishment that retains the bureaucratic complexity of the communist years as well as the artistic traditionalism of the pre-communist period. In terms of both its artistic agenda and exhibition space, the inauguration of MNAC in 2004 entailed something of a quiet revolution in the city. Anchored at the heart of establishment Bucharest, the museum rises up through four palatial floors of one of the world’s largest buildings, the most controversial of Nicolae Ceauşescu’s creations: the Palace of Parliament. The palace is a truly crazed creation; the initial impression is ugly, ultra-patriarchal and shocking. As a telling indication of the reactionary response to MNAC’s arrival, rather than visit the museum openly, TV news cameras panned into its offices from a window in the adjacent government wing. In many ways, the physical instantiation of Ceauşescu’s power is a more than problematic structure for a contemporary institution to call home. Viewed against the anarchic backdrop of Bucharest’s architectural history, however, MNAC’s provocative location is simply another striking juxtaposition in a city of improbable parts.

Over its short existence, MNAC has asserted itself with a strong programme of internationally focused exhibitions. A highlight in 2008 was ‘Animations/Fictions’, a diverse collection of international works sourced from the Centre National Des Arts Plastiques, Paris. This excellent show reflected a wider trend in Bucharest to support illustrative art. Where MNAC could showcase large-scale installation work, ‘Draw local. Think European!’, a ten-day exhibition in December 2008, offered a modest survey of illustration across Europe. Curated under the auspices of the European Illustrators Forum, the exhibition was held in a branch of the Carturesti bookstore, one of Bucharest’s few non-profit supporters of contemporary art. Back at MNAC, ‘Xmas Party’ (which runs until the end of February), a solo exhibition by French artist Fabien Verschaere (who also featured in ‘Animations’) sees black line-drawn murals penned directly onto the museum’s walls, alongside an assortment of twisted Christmas paraphernalia.

2008 also saw a return to Bucharest for Dan Perjovschi, with the creation of a number of permanent site-specific murals at the National Centre for Dance, and a retrospective exhibition of his paper-based work. Held at Galeria Posibila – one of Bucharest’s original, and still preeminent, commercial galleries – the exhibition (running until February) features a well-curated collection of exhibition catalogues, magazine work, illustrated-books and Perjovschi’s self-published newspapers. The various illustrations detail Perjovschi’s penchant for marrying the comic with tightly drawn social and political critique.

MNAC’s lead exhibition for the first quarter of 2009, ‘A Forest Of Sculptures’, is indicative of a longer-standing trend in Romanian art. Fittingly, a golden Brancusi graces the centre of this lavish assembly of tall, narrow works from the Simon Spierer collection. Name-checking many of the 20th century’s most prominent sculptors, notable works here include Arnaldo Pomodoro’s shattered skyscraper-like column, Asta cielare VI (1999), and Jean-Louis Perrot’s corroded iron bow, Reach (1998), which slices the room into segments as you circle around it.

Amongst the limited showing of 20th-century art in Bucharest, some of the finest works are unsurprisingly the Brancusis in the National Gallery. Also in the National is a room of mystical creations by sculptor Dimitrie Paciurea (1873-1932), along with further work from artists such as Irina Codreanu (1896-1985), whose work echoes both Brancusi and Barbara Hepworth. Here as well are a limited number of pieces by Brancusi’s contemporary Frederic Stork (1872-1942), whose work stretches from stiff busts of men with beards to clean, modernist figures that blend a futuristic classicism in plumb Hellenic nudes. The best presentation of Stork’s work can be found at the Stork Museum, one of Bucharest’s most charming galleries.

There is frustratingly little Romanian art from the second half of the 20th century shown in the city, thus largely obscuring a defining era in the country’s history. In this regard, MNAC – which is sometimes referred to, in somewhat Kafkaesque fashion, as ‘the Museum’ – has been criticized for not showing a permanent collection, and for favouring international exhibitions over Romanian artists. The indication, however, is that, over time, both MNAC and the independent galleries do plan to dig deeper into the country’s modern heritage.

At the forefront of Bucharest’s commercial spaces are Posibila and the nearby H’Art Gallery, both of which opened in 2002. Run by Dan Popescu, H’Art’s artists include the enigmatically titled Gorzo, painter Roman Tolici and Ion Birladeanu – the veteran creator of socially sharp and comic collages who Popescu literally ‘discovered’ living rough at the local dump. Birladeanu’s work is especially interesting as a rare exhibited example of subversive art from the communist period. In a separate story, that echoes the confused reaction to the opening of MNAC, Gorzo and Popescu managed to cause a minor national scare when the graffiti-style worm-like emblems they had installed on walls around Bucharest were seized on by the TV news to propagate a fabricated story about satanic groups that were supposedly taking over the city.

As far as Popsecu is concerned, Bucharest has finally come to grips with the idea of contemporary art – the indication being that bewildered reactions will at least no longer be aired for public viewing. Increased appreciation may be aided by the growing gallery circuit. Firmly established since opening in 2006 is Ivan Gallery, a compact central space that represents an impressive group of Cluj-based painters, as well as supporting photographic work. Andreiana Mihail Gallery is another relative newcomer: representing both Romanian and international artists, Mihail has been active in bringing Romanian contemporary work to global attention, most recently exhibiting at the NADA Art Fair, Miami. One novel addition to the scene, organized by Bucharest artist and resident designer at MNAC, Suzana Dan, is the Night of the Galleries. This intermittent event, that can run until the early hours of the morning, sees galleries opened up to some of their largest visiting numbers in the year.

An engaging feature of the Bucharest scene is that gallerists retain an idealistic drive to both nurture their artists and increase Romania’s international standing. New developments for 2009 include the opening of a larger, second venue by gallerist Marian Ivan, as well as the unveiling of a permanent exhibition space by Pavilion, the magazine behind the Bucharest Biennale (founded in 2005; the next installment is summer 2010). Also likely to be of importance is the opening of a well-funded auction house close to the commercial galleries, which will sell modern and contemporary Romanian art. One factor that would aid Bucharest’s galleries would be an increase in serious Romanian collectors who can fund contemporary art whilst also keeping works inside the country. (It should be noted that one of the best of the older institutions is the impressive Art Collections Museum, which brings together a host of major private collections bestowed to the nation.) While the current economic climate and other domestic restraints will clearly have their own impact on the vigour of Bucharest’s contemporary scene, the long-term signs suggest a bright revival.