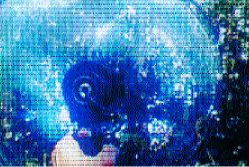 Galtabeck, a few kilometres from Varberg on Sweden's west coast, is a surfer town with a turbulent maritime climate. Henrik Håkansson's new home is next to the football club in a district known as Galtabeck Four or just Area Four. The 'Four' indicates that the place isn't really Galtabeck proper, but a liminal zone of subdivisions and depopulated pig farms, slightly cut off from the rest of the village. Håkansson calls it his Area 51, not simply for the obvious reasons of its remoteness, inaccessibility and occasional UFO activity. Behind every garage door is a rolling American boat, a bubbling Corvette, or a finned and rumbling Cadillac. The district is a rubber-burning American car capital - Håkansson's neighbours have a growling Chevy Suburban and a black Corvette for special occasions.

His actual place of birth is Helsingborg, home to an absolutely-not-to-be-fucked-with Hells Angel community further down the coast, but Area Four is where he has returned to; it is his Combray. It's a place where nothing is quite as it seems, and one that demands constant vigilance. The recent revelation that the avuncular founder of Ikea was a Nazi sympathiser obviously intrigues Håkansson, like finding out Colonel Sanders has been seen loitering around a nearby schoolyard; but then the creepy local hardware store, with its privately maintained and by-appointment-only collection of endangered species taxidermy, is equally fascinating. Once in a while, a brown bear is spotted wandering through local gardens on a restless quest to find other bears, but they have become scarcer, and now badgers are the only regular night-time foragers.

The functions of Area Four are threefold. It's far enough (maybe a five or six-hour drive) from the Stockholm art scene to be undisturbed: it allows Håkansson to indulge in daily, hourly, bird-watching on the wetlands in front of the house, and the countryside is generous in what it offers to his work. Gypsy moths dash about in wild zigzags. Birches and lindens go through their involved, aromatic, messy metamorphoses. The garden is super abundant with the kind of birds and insects that makes Galtabeck Four a perfect research site. The azure UV night traps yield up moths and insects into plastic pails; the four nesting boxes in the spruce trees have all been occupied and have surveillance cameras set up inside to observe the hatchings, bickerings, and squawkings. Håkansson has been nomadic lately, but the lessons learnt from Area Four are applicable all over the world, from Ecuador's jungles to the Arctic bogs of Reykjavik. As an amateur scientist with a trunk full of recording equipment and connections to scientific research institutes, Håkansson has been visiting these easily subverted satellite stations of naturalism. In the Arima Valley, Trinidad, he appropriated the bat nesting caves discovered by English biologist Donald Griffin, now overseen by the New York Society for Tropical Research, and the latter's slightly dilapidated, deserted residence.

The visit provided material for his participation in the exhibition 'Pyramids of Mars' at Edinburgh's Fruitmarket gallery: a 20-minute video of Håkansson in the Trinidadian jungle, pointing a parabolic directional microphone at insects, tweaking their sounds and then playing them back through a feedback device called a Pandora communicator. The playback is desultory, not interventional, more about the act of recording and all the expectations that are folded into it. The residual image is of a lone amateur scientist at the night-time research station, fiddling with dials, scribbling in damp notebooks, and enveloped in feedback as the termites quietly conspire to take control of the colonial building. At the bat caves, he set up a camera nearby a strobing UV light and for ten minutes recorded the bats or insects which flew past. The playback, at one third speed, reveals them in flight, kissing their shadows over the walls.

This is all slightly different from his better known, schoolboyishly enthusiastic early work, for which Håkansson collaborated with DJs and made Ambient Techno environments for frogs - Frog for E.S.T. (eternal sonic trance) (1995) and Z.O.N.E. for Frogs (1996) - and connected a group of crickets to a PA system for Monsters of Rock (1996). But the whole Beuysian - or Doctor Doolittle - persona wasn't really where Håkansson was going. His new works are heading away from an active management role, as the difficulties of maintaining a natural community came to obscure the main aim of the projects. With his installation of a butterfly breeding environment, Out of the Black into the Blue, at the Venice Biennale in 1997, feeding time became such a crowd-puller that Håkansson was forced to do it in the evenings and early mornings, during the quiet periods. There was plenty more to see: it was possible to watch the larvae pupating, or, if you were pressed for time, just the highlights displayed on a monitor - technical mediation itself became part of the work.

The abandoned biosphere experiment in the Arizona desert weighs on Håkansson's thoughts - a synthetic 'natural' environment that might have worked, but in the end couldn't be sustained because of personal disagreements between the scientists observing it. 'It always seems too difficult for scientists to just sit there, they have to change something', says Håkansson. In his work he has replaced the synthetic approach with an ambient information gathering process in which disorder is allowed to break through. It makes the style of BBC wildlife documentaries, where the walls of sets, runs and hives are replaced with glass, and the action of months compressed into seconds, look heavy-handed. If Håkansson's work has taken a more reflective direction, that doesn't mean it has lost ambition or scale, or even an urge toward becoming land art.

Two recent projects in Finland and one in the Basel Kunsthalle are concerned with the question of active land preservation in northern Europe. In Helsinki, Håkansson has taken a roadside grass verge, an interstitial jogging strip between tarmac and the foreshore, and excavated 30 metres of it, replacing the soil with a new beach that is close in consistency to that of the local dunes. There is a chain-link fence around it, with pen-size cameras located in the grass. Fence-mounted monitors allow visitors to check out the real time progress of the plants, their pollinating insects and butterflies. The work, entitled A Thousand Leaves (2000), is an unobtrusive wound cut into the beachfront, a Robert Smithson-scale gouge that required a parade of low-loaders and earth-moving equipment to put in place, but the macro scale has yielded up the most intimate microscopic observation.

Tomorrow and Tonight (2000) is an ongoing project at the Basel Kunsthalle in which builds on the city's policy of encouraging roof gardens. The gardens become staging posts for insect life, landing strips in the city centre that are even less visited than remote forests. The soundtrack played over the nocturnal recordings from the gardens' cameras, is the street noise of trams, cars, and flapping wings. Håkansson is like Nick Broomfield on the trail of insect scandal: by standing back, rolling the camera, and seeing what happens; by letting the insects incriminate each other; or by collecting background chat, he gets his results. At some level there is an abiding interest in the urban cult of surveillance cameras, the possibility, as Håkansson describes, of 'action everywhere', that may or may not be used as evidence. But for every low-profile, pen-sized camera there is a moment during which the artist is obtrusively stumbling, waving the directional mike around, a high-tech parody of the butterfly collector's swooping, retinal activities. Håkansson hasn't lost his fondness for jivey pop cultural references in the titles, but a recent film, Sleep (1998), gives a nod in the direction of Warhol. It records a sleeping snake, filmed in Ecuador, and runs for three soundless hours - about the time it took for the camcorder batteries to drain down. The anaconda doesn't do anything at all in that time, except re-coil itself once. Catching the moment of rearrangement isn't important: revisiting Warhol's observation that he would be happy to stay at home if he could have a TV feed from each of the parties to which he had been invited, the feeling of audience presence is sufficient in itself. Håkansson isn't the only artist who sets up shop to carefully observe the natural world and make the mediation crucial. But what counts for him are the tender ghosts that find their way into view, humouring a lucky mortal.