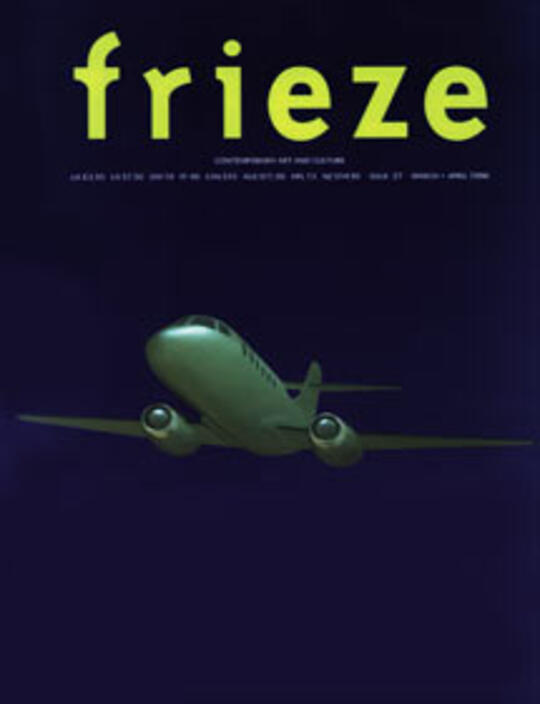 The press cuttings about Equivalent VIII (1966) - now universally known as the Bricks - fill three bulging volumes in the Tate Gallery Library, and more will no doubt be pasted in when Carl Andre's work goes on display again this May. They are not an inspiring read. 'What a Load of Rubbish', the Daily Mirror's 1976 headline, has echoed down the years like a needle stuck in a groove. The Bricks have become a kind of shorthand for the perceived pretensions of avant-garde art: if the contemporary versus traditional debate ever needed a symbol, it has one in this work. That such an unassuming sculpture - a neat two layer stack of 120 sand coloured firebricks - should be so inscribed within the consciousness of a nation is not without its ironies.

In more recent controversies, such as those around Rachel Whiteread's House (1993) or Damien Hirst's cows, the artists were credited at least with producing something unique and new. The perception of Equivalent VIII, however, was that anyone with access to some bricks could have made it themselves. Indeed many juxtaposed photographs of Andre's piece with their own brick 'sculptures'. Rather than appreciating the construction of the work as a radical approach to making sculpture, the media used it to declare the Bricks a fraud.

The unlikely catalyst for all the attention was an article in the business section of the Sunday Times on 15th February, 1976. Examining the Tate Gallery's Report for 1972-4, the piece referred to apparent Treasury concern at the use of public money for the purchase of minimal and conceptual art. At the time, the Bricks were not on show and the Tate was preparing the private view of a major Constable exhibition. Despite the sudden, rather surreal juxtaposition of priorities, the Tate acted with unusual speed, installing the Bricks in one of the Modern Collection galleries. A news film crew enjoyed itself shooting the elaborate process, including the removal of each brick from the green felt-lined compartments of the storage case, while one of the first of a whole genre of cartoons shows the Bricks inserted into Constable's Haywain.

Putting the work on show and fuelling national and international attention might have seemed a bolder move if the Tate had supplemented the display with a confident interpretation of the work. Instead their response was a mixture of the blankly self-justifying and the oblique. According to a statement to the press, the Trustees were following a more 'adventurous' policy in 'trying to discharge their responsibility of making available to the British public examples of work which is being made now. It is certain that some of their purchases will appear incomprehensible or even offensive to some visitors in the same way that Constable's work was widely attacked in his own day'.

The Tate had been astute in acquiring some world class examples of minimal art when they were still affordable. But appealing to posterity to justify the new completely ducked the issue. It meant in effect that most people were left in the dark, awaiting some future revelation as to the artistic meaning and value of the Bricks. The only glimmer came from Norman Reid, the Tate's Director, in a letter to the Times. Reiterating that 'in the course of time their [the Trustees'] purchases will be appreciated by a growing number of people...' Reid asserts the eloquence of Andre's work as material in the world, by quoting Wordsworth:

'A primrose by a river's brim

A yellow primrose was to him

And it was nothing more'

Well-meaning as this response was, it is unlikely to have enhanced understanding of the Tate's artistic logic in buying the Bricks. But the Tate were not alone in missing an unprecedented opportunity to discuss new art at a time of astonishing media and public interest. The art world - including Andre himself who remained in America throughout - were bemused and surprised at the level of attention.

To a degree this was understandable. The sudden attention seemed strangely out of time. The Bricks were ten years old, clearly located within a recognised movement and therefore more or less consigned to history, part of the past rather than the present. Furthermore, they had been already exhibited twice at the Tate in 1972 and 1974 without causing any kind of stir. The truth was that so much had happened of a more overtly radical nature in art since 1966 that in comparison the rather formal experiments of an American Minimalist using found materials seemed singularly unprovocative.

Andre's own view that 'art is what we do, culture is what is done to us' seems highly apposite. Meanings and interpretations of the Bricks were somehow beside the point. The art world got on with using the controversy for its own partisan purposes - ammunition within the protracted debate about the success or failure of Modernism - while the public was left with a permanent excuse to deride new art by referring to the Bricks.

In an era before market research it is the public's views that remain in shadow, though the (mostly negative) letters to the press provide some record. There were also the numerous objects, offered as art, that inundated the Tate: a vacuum cleaner, paper clips, string, a photograph of a filing cabinet... The Education department viewed this reaction positively, as an interactive relationship with the work and its content. Only a week after the Bricks were put on display, it was an interaction by one visitor, in the form of throwing blue food dye at the work, that represented the most visible public response. The Bricks were withdrawn, accompanied by Reid's statement: 'They will not be on display for a while with people in the present mood'.

Little of substance had been offered to those who were open to taking a deeper interest in the Bricks as significant art. A popular book, to have included information, interpretations and cartoons, was prepared for the 1977 re-display of the Bricks, but was shelved by the Trustees. When it finally came, the Tate's formal defence of the Bricks was not aimed at the public at large but at the art establishment, in the form of an article in the Burlington Magazine by the Assistant Keeper, Richard Morphet. 20 years later the Bricks continue to be one of the most frequently requested works in the Tate's Collection (along with works like Rodin's The Kiss and Matisse's L'Escargot) yet, apart from a page in the Tate's Illustrated Companion, there is nothing available in print for the visitor to the Tate, not even a postcard.

Ultimately, the continuing iconic status of the Bricks is a sign that the climate - and reception by a wider public of new art - may not have changed as much as many would like to think. What happened in 1976 may seem like an ancient row, but the participants have never settled their differences.