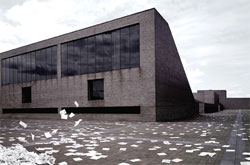 Having walked to the exhibition venue through Southampton University’s Highfield campus, it was a jolting experience to be confronted by Cinegiornale, a 16mm black and white film being shown in the gallery’s project space. Shot by Italian student filmmakers in 1968, the footage documented the protests, occupations and riots that took place all over Italy early that year, most notoriously at Valle Giulia in Rome. Remarkable scenes of smartly dressed young men and women making speeches, marching with placards and running from water cannons seemed entirely at odds with the listless clusters of students hanging around Sir Basil Spence’s Modernist faculty buildings outside the gallery.

It was this yawning gap between the realities of university life in 1968 and the present day that ‘Campus’ primarily sought to address. Much of the work in the show used architecture as a lens through which to observe this change, drawing on the intertwined social histories and aspirations of the academic micro-societies that architects such as Spence had created. Christian Phillip Müller’s project The Campus as a Work of Art (1996–8) was commissioned by the University of Lüneberg; the work (we are told) arises from an investigation into the influence that architecture and aesthetics have on human behaviour and memory. The resulting series of screen prints shown in the exhibition overlaid Lüneberg’s own campus plan with those of various other universities, each comparison pinned onto Lüneberg through its focal heart, the library, which was invariably at the centre of the image. Müller offers a wide variety of architectural options for the would-be campus dweller to choose from, but gives no clue as to how the experience of living within a decentralized institution (such as the University of California at Santa Cruz, built in hamlet-like clusters throughout a forest) might differ from that of the students of the somewhat defensively rectilinear University of Lüneberg.

While Müller’s project gave no clear answers to its own question, the photographs of Nancy Davenport replied in no uncertain terms. The deserted concourses of the Brutalist college campuses that she photographs speak more of an abandoned project than of expectation or potential. Painstakingly composed and then digitally manipulated, the images frequently feature acidic, sunlit skies that seem entirely dislocated from the thunderously grey buildings beneath them. In the single image depicting actual students, Physics (2004), they stand huddled and hooded, gazing at the hulking mass of the physics faculty ahead of them as if awaiting readmission following some kind of alarm. There is a keen sense of fall-out from the events of 1968 in these photographs, as if the institutions Davenport depicts are still reeling from the upheavals of nearly 40 years ago. In what is perhaps the most powerful and succinct work in the show, the diptych Portrait of Dan Graham (2004), Davenport shows the artist in his old-geezer knitted pullover, surrounded by institutional concrete. In the left image he glares furiously at the viewer; in the other his eyes are cast forlornly to the ground. Graham, who was 26 in 1968, stands for the generation whose disappointment at the dissipation of its once fierce convictions (quaint as they may now seem) is sharply felt by today’s student population.

The Copenhagen Free University belies its grand moniker with a project that goes to such great lengths to avoid being didactic that it frequently seems reluctant to reveal a position at all. Taking Power, Refusing to Become Government – Theses on Knowledge Production (2005) is typically equivocal. A sound piece, played so quietly on two towering speaker stacks that the listener is forced to hover close in their shadow, consists of fragments of speech taken from conversations that the CFU conducted with students and lecturers during a residency at the university. In keeping with their ongoing project, the work concerned itself with the structures for knowledge dissemination without ever revealing what that knowledge might be: ‘We are concerned with how knowledge can be turned into life’, says someone. Another: ‘What one learns at school or university is not necessarily content or data, but a behavioural model. That is political.’

One of Davenport’s photographs, Library (2004), shows piles of anti-Iraq war leaflets discarded on a deserted university concourse. The spectre of that war, and its failed opposition, hang heavy in the air of this show, begging an obvious comparison with Vietnam. But such a facile analogy is misleading; the two situations are vastly different, and it would be lazy to draw hasty conclusions about the state of contemporary political activism today in contrast to the fervour of 1968. The age of radical political opposition is far from over – as I write, the suburbs of Paris are burning at the hands of rioters for the 12th night in a row. However, the threat of dissension no longer comes from university students; it is those who are excluded from the safe and neutralized world of the university who now threaten to breach the peace.