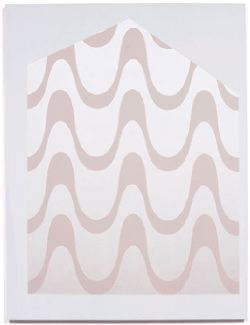 Carla Arocha approaches abstract painting and sculpture via the culture of design and high fashion, creating objects that simultaneously reside in both the mass and luxury markets. Her work is sophisticated and vernacular, urban and female. If design can turn ideas into fashion, Arocha turns fashion into painting and sculpture.

Arocha's latest show expands her earlier wall project Hide (1997) by re-directing its site-specificity back to the realm of eloquent objects. The mirrored Perspex patterns comprising Hide graced the walls of Chicago's Museum of Contemporary Art like a spectacular jewelled accessory, clusters of reflective plastic shimmering and swaying in the white gallery. In these works, Arocha continued her interest in reflective, clean-cut Perspex as a medium of perfection. For Transition (1999) she arranged the bronze-tinted plastic on the floor - it looked like a pool of warm, stylised diamond shapes. No longer submissive to architecture or the authority of the institution, Transition epitomises a contemporary opportunistic, even somewhat Baroque, cultural zeitgeist.

Arocha's paintings, which are flat and pale, lack the shrill luxury of the Perspex installations and kinetic mobiles. But hidden within a minimal framework is a preoccupation with ornament. House (1999) fills the hard-edged contour of a simple pitched-roof dwelling with bold, meandering loops. Tucked into Blind Folded (1999) and Flare (1999), two large vertical canvases, are the artist's passion for pattern, glamour and the superfluous. Dots, diamonds and aggressive organic patterns are camouflaged in monochrome fields. Her panache for extravagance is only hinted at through subtle shifts in the reflective character of the paint.

Even more invisible than the paintings is a selection of delicate ink drawings. Virtually undetectable is the complicated drawing Portrait I (1999). Executed in faint yellow ink and narrow lines, the precision and accuracy of this drawing could be read as an architectural floor plan of a mosque. With their dependency on fashion and taste, Arocha's drawings work at the edge of design, modestly transforming haute couture into art products.

In a recent article in the New York Times, Elizabeth Hayt drew a parallel between the present, Vienna's gilded age and the visual experiments of the Victorian period. Referencing curators, designers, architects and historians, Hayt's article underscored a collective spirit of material beauty and exuberant style, stating that

'if the mid-90s saw the reign of sober minimalist uniforms on fashion runways, now anything dark, monochromatic and tailored looks like a throw back. For Spring 2000, the cry for oomph is crescendoing.'

This is Arocha's world. But unlike this season's fashion trends and those who identify them, Arocha protracts style, weaving Fifth Avenue into Minimalism, perception into lounge decor, and restraint into the extraneous. If visual culture has taken a turn toward the spirited, Arocha's baroque designs retain a healthy Modern cool.