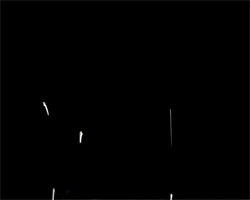 Ceal Floyer became known in the mid-1990s for her ultra-minimal multimedia works involving the humblest possible material means: subtle experiments and interventions using everyday objects such as cash register receipts, light bulbs, marker pens and a rubbish bag full of air. Implicit in her Conceptual method is a rejection of the visually spectacular, feats of specialist material transformation conveying novel content. Instead her practice, which she once described as ‘manifesting uncertainty in art’, focuses attention on the space allotted to art (usually by filling it up with next to nothing), and on the interaction between expectations and perception. Her most recent untitled exhibition was also characteristically sparse and rigorous, but it departed somewhat from the cool and detached, if playful, quality of earlier pieces in favour of a striking emotional directness.

The exhibition, Floyer’s first one-person gallery show in Berlin, included just two simple works, the first of which was a technically uncomplicated sound piece in the gallery’s otherwise empty main space. ‘Til I get it right (2005) was created from a short sample taken from Tammy Wynette’s song of the same name, the lyrics of which include the lines: ‘So I’ll just keep on falling in love ’til I get it right/If practice makes perfect then I’m near ’bout as perfect as I’ll ever be in my life.’ Floyer chose the song for its words rather than for the reference to Wynette – although I wonder if it’s possible to disentangle them, especially since the singer’s voice was so achingly present in the work. Floyer tampered with the original sound file, digitally excising the words ‘falling in love’ from the recording, leaving a melancholy lilt: ‘I’ll just keep on/’til I get it right‘. The new musical phrase is so seamless it can be mistaken for the original take. The work was looped and abandoned to play ad infinitum on a sound system placed without any noticeable fuss against a side-wall. Every intonation, breath and syllable of the displaced voice of the former ‘First Lady of Country Music’ – who was plagued in her lifetime by more than an average share of personal hardships, including bereavement, illness and multiple divorces, and who was celebrated for her ability to transcend pain in song – was drenched in a cathartic pathos. It seemed to me that repetition served not to abstract this (like the Warhol screenprints of Jackie mourning), but rather to give it even more emphasis.

Floyer’s piece, a kind of audio version of a Conceptual art neon sign or appropriated wall text, made me think about the problematic frame of Conceptual-art-meets-women’s-issues or, more generally, emotional content. Perhaps it’s obvious, but it’s still odd to think of Wynette’s biggest hit, ‘Stand by your Man’ (1968), playing in a room where Joseph Kosuth’s Art as Idea: Nothing (1968) is hanging, for example. Closer probably to the artist’s intentions was how the editing-out of love inflected the phrase with new meanings, which the artist explained to me were ‘amphibious’ in the way they addressed both the artist herself and the viewer. Putting on an optimistic face while being trapped in a cycle of continual disappointment is one possible interpretation. But perhaps the underlying message is that, right or wrong, succeed or fail, everything is an ongoing process, whether the subject is relationships or exhibition-making. In the end, whether or not to assume a safe ironic distance was left up to the audience.

Floyer has arguably used sound to better effect before – for example, with her LP of a recorded slide carousel (Carousel, 1996), her bucket-and-drip fake leaky gallery piece (Bucket, 1999) or even her Nail Biting Performance (2001) in Birmingham before an audience of classical music devotees. But the second piece in this show, in the dark back space – the silent but dazzling wall-filling video projection Apollinaris (2005) – completely banished any lingering sense of doubt. The work consisted of magnified footage of bubbles shooting from the top of a glass of mineral water, from whose brand name the work took its title and which incidentally is promoted in Germany as the ‘queen of table waters’. Staring at bright, flashing micro-spurts appearing and vanishing as quickly as they came was as refreshing and restorative as an effortless metaphor. An illicit beauty in Floyer’s video work emerged like an afterglow, seeming to express a deep and earnest longing for things, however short-lived or doomed to fade, to be seen differently, for them to be quieter, more careful and a whole lot more thoughtful.