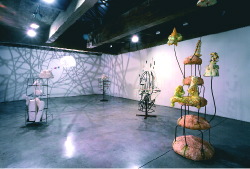 Perhaps it has something to do with the long-awaited arrival of spring in a thoroughly frost-bitten New York, but there seems to be a renewed appreciation of children and the childlike in the air just now. Martin Honert and Peter Friedl both took kids' doodles as a point of imaginative departure, in exhibitions at Matthew Marks and Sara Meltzer respectively, while Charles Long, coming in from the cold with 'Winter Work'‚ identifies his seven-year-old son as his creative muse. Whether Master Long is conscious of exploring in his fledgling graphics, as Bonakdar's press release claims, 'the ancient worlds of the imagined past and the transforming promise of a future science' is uncertain, but on the evidence presented here they definitely have their merits.

Long Senior is best known for a likeable brand of latter-day biomorphic abstraction, combining elements of space-age bachelor pad design with organic and post-organic forms that display a heartfelt but humorous appreciation for grotesquerie. In 1995 he collaborated with Retro-futurist lounge band Stereolab on The Amorphous Body Study Center, a set of plastic blobs sprouting sets of headphones through which viewers could listen to music while reclining on pillows and toying with a conveniently placed mound of candy-coloured Plasticine. A couple of years later he discovered the potential of coffee grounds as a sculptural material, coating a number of works in a thick, brown, fragrant skin of the stuff that was at once a tribute to their genesis (during the morning wake-up mug) and a self-deprecating projection of their ultimate fate (flushed away, never to return).

'Winter Work' is a series of nine sculptures in a generally more conventional, but still eclectic, range of media, including steel, aluminium, plaster, ceramic and paper. The stylistic wit of Long's earlier work is still present; even the complex textures and subdued coloration of The Scattered Tamarack (2004) cannot entirely disguise the apparent inspiration provided by Dr Seuss and Hanna Barbera. Yet there is also a subtly melancholic feel to these works that represents an emotional departure for the Californian artist.

This shift is evident immediately in the front gallery. The Direction of My Home (2003-4) consists of a rough-hewn lamp that projects awkwardly from the wall and illuminates a series of tiny protrusions scattered across its surface. The improvised look of the work and the dreamlike atmosphere imparted by the planing light allow Long to transcend mere eccentricity and achieve genuine affect. Oblivion Parkway (2003) is a larger, free-standing sculpture that occupies the middle of the room. An all-white cluster of towers, pipes, stalks and branches arranged around a central block; it suggests an architectural project left unfinished and abandoned to nature or an ancient shipwreck encrusted with barnacles and coral. Gnarled and pitted, it has a forlorn air that the dystopic Ballardian title does nothing to dispel.

In the main space the mood brightens somewhat. The Fire Theft (2004), a bundle of aluminium pipes lit from within to cast an enveloping latticework shadow, looks like the product of an altogether more optimistic jam session. Orbited by small, primary-coloured objects connected to the nearest wall by a spindly structure, it could be a visualization of the artist's search for an elusive idea that seems to exist in plain sight but hovers out of reach. A Marvellous Science (2004) has something of the look of 1950s design. Arranged around a steel and aluminium armature roughly the size and shape of a tailor's dummy are a dozen or so small ceramic shapes glazed in a variety of bright colours and finishes. Part atomic model, part Eames coat-hanger, this piece too evokes a spirit of pioneering experimentalism and the childlike excitement of pure discovery.

The template of a central structure surrounded by a number of smaller components is revisited in A Slave Chemist (2004). Here a black steel stand that looks like it was salvaged from an old department store supports a system of white plaster and papier mâché objects that might have been modelled after malformed vertebrae. These encircle what looks like the skull of some extinct or mythical animal. The overall impression is of an obscure ritual artefact: a tribal fetish or totem pole. If The Fire Theft is an image of a moment in the life of the mind, A Slave Chemist presents us with a set of variations in both spiritual and physical evolution. Both sculptures, and 'Winter Work' as a whole, belong to an area of study that Long has successfully claimed as his own.