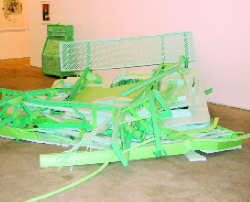 Depending on whom you ask, ice hockey is either the most or the least aesthetic of sports. To the outsider and the fans in the 'nosebleed' seats it's a bunch of toothless mullet-heads slugging each other senseless; to the indoctrinated it's a balletic team endeavour. If this sounds snobbish, that's because it is. The sport has long been defined by two classes of players: the rugged gentleman and the volatile goon.

Chris Hanson and Hendrika Sonnenberg, Canadian artists who have been collaborating since 1987, use ice hockey as an often humorous metaphor for various forms of social exchange. Like fellow art-jock Matthew Barney, who finds inspiration in the coded machismo of American football, they explore the surlier rituals of their chosen sport. But in their athletic formalism and collaborative spirit, apparent in their second show at Cohan and Leslie, they hint at the potential for redemption.

Hanson and Sonnenberg work in various media but, to judge from this exhibition and several recent group-show appearances, they are most effective as sculptors. Their latest installation, made from carved polystyrene in icy shades of blue and green, replicates a wrecked scoreboard, lying face-down, a microphone stand and speakers, suggesting a public-address system, amplifiers, several stacks of beer coolers, a broom and a string of lights. These works resist narrative speculation - a locker-room party gone awry, perhaps, or a disastrous intermission show? - but set a tone of festive catastrophe.

Modelled after the four-sided structure that detached from the ceiling and plunged on to the ice at a Buffalo arena in 1994 (shown in an inkjet print in the rear gallery), Scoreboard (all works 2004) is a spectacular heap of frayed wires and warped tubing. The microphone stand (and related audio equipment) is nearly as suggestive, conjuring the artful deflections of a press conference. The artists have thrown in a few extras, gags in the spirit of the sublimely silly and classic ice hockey film Slap Shot (1977). Near the gallery entrance is Dumpy, a tiny Plasticine figure squatting with his trousers around his ankles; in the back room is a sack of kidney beans, individually formed from modelling compound, which sits beside a rather less convincing bucket of fake blood.

The show shifts from labour-intensive sculpture to casual representation and appropriation with an installation of drawings, collages and photographs along one wall. These include prints from the ongoing series 'Agreement Room', stock images of conflict resolution that encompass ice hockey fights (taken from videos hawked on the Internet) and political round tables such as the Yalta conference. The drawings are more elliptical, especially the ones labelled 'ATM drawings'. Adorned with barely legible text, these centrifugal scribbles on paper and acetate resemble planetary diagrams, surgeon's notes or Mark Lombardi flow charts. While they reinforce certain formal and theoretical elements of the sculptures ('the hub and the glitch', as Frances Richard has described them), they don't seem to describe any recognizable process.

At a moment when many artists are working in (or simulating) friendly, anything-goes collectives, the idea of a duo going head-to-head is appealing. It's often unclear, though, whether the conflict is one of process or subject. Just above Scoreboard is another still from 'Agreement Room', showing two players locked in mid-tussle, gloves on the ice and helmets askew. It's a compelling picture of contained violence turned blood sport, even if we're not sure who threw the first punch.