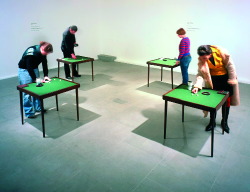 In 1967 John Berger published A Fortunate Man, in which he and photographer Jean Mohr recorded and reflected on the daily life of a country doctor, John Sassall. Their subject appears as a modestly heroic figure, trying against the odds to hear the voices of his isolated patients in their most unspeakable moments. Despite its tragic coda - Sassall, already depressive in Berger's account, later committed suicide - the book has had a happier afterlife as required reading for prospective health professionals, and was recently reissued by the Royal College of General Practitioners as a lesson in the complexities of the encounter between doctor and patient. Christine Borland's latest work seems to mine the central seam in Berger's meditation: the gulf of time between a suffering consciousness and the figure who gives it frail hope.

'The anguished are trapped', writes Berger, by 'the rigid irreversibility of events'. Sickness is an unwelcome sort of time travel; we see ourselves as if amputated from the reality of lived time and thrust into a dreadful stasis that threatens, none the less, to accelerate into an alternative, unknowable future. In Simulated Patient (all works 2004) Borland freezes the airlocked horror of that moment of uncertainty in three overlapping scenes. An actor plays the part of three women to whom 'bad news' must be broken; real medical students are charged with revealing the diagnoses: HIV, terminal cancer and infertility. Each conversation unfolds in turn on a separate screen while, on the other two, the student/doctor waits silently for the interview to begin. Written instructions outline the information to be imparted or assimilated. As each encounter is repeated with two students, the differences in the students' deliveries have the effect of prolonging or contracting the patients' agony.

As a representation of the kind of role-playing exercise daily rehearsed by medical students, Simulated Patient replicates rather distantly the notion of medicine as a kind of theatre, recalling the scenography of a pedagogical performance like that of Rembrandt's Anatomy Lesson of Doctor Tulp (1632). In that sense Simulated Patient - as also the related Communication Skills Exercises, with its photographic record of medical students' testing each other's skills in observation and reportage - is entirely of a piece with Borland's fascination with the often coldly aestheticized way in which medicine and science present the results of their research.

Borland is interested precisely in the ways in which real bodies are abstracted into quantifiable data. In Home Testing four combinations of gaming tables and dice invite us to record our random successes or failures in accompanying notebooks. The installation reproduces the patient's obscure relation to the statistical fate of the body: a throw of the dice, as they say, will never abolish chance. But Simulated Patient never allows that abstract leap out of the here and now of suffering. It is a catalogue of terribly significant pauses. With its silent figures and fades to black as a hesitant voice starts up, it resembles nothing so much as the television works of Samuel Beckett, such is the weight given to silence and the brute insistence of the décor: breeze-block walls and bare tables.

Borland's instructions to the students seem sure of the distinction bet-ween a pregnant pause and an expanse of dead air: 'Use active listening and use silence to enable expression of feelings.' But as in a Beckett text, the difference between a pause and a dead stop is actually less certain: the patient is living in a very different sort of quiet from the doctor who has a story to tell and the next cue to hit: 'Check how patient is feeling.' Out of that mute instant Simulated Patient discerns the sense of distant co-existence experienced by doctor and patient, as if neither can quite believe the words they're speaking or hearing. The implications of such solitude, says Berger, 'can be almost limitless. What is the value of a moment?'