Clean Up Your Act 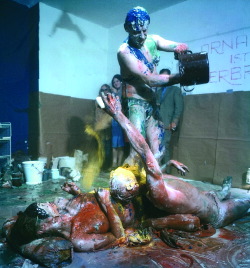 On the night of 7 June 1968 the already notorious art movement known as Viennese Actionism finally became em-broiled with the law: an event officially entitled 'Kunst und Revolution' (Art and Revolution) led to charges being pressed against Günter Brus, Otto Muehl and Oswald Wiener. What had started out as an ordinary student gathering was taken over by a group of people associated with the Direct Art Group; while Muehl threw beer around, Brus defecated and masturbated in public while singing the Austrian national anthem. Wiener, who in fact had only been talking about computers, was quickly released. The tabloids coined the term Uni-Ferkelei (university obscenity), which for many Austrians is still synonymous with the day's events.

Documentation of what took place is scarce. Aside from oral history, only a few photographs still exist, along with Ernst Schmidt Jr.'s two-minute film that includes footage of the evening, also entitled Kunst und Revolution (1968). Significantly, the film is featured in all three major exhibitions dedicated to Actionism being held in Austria this year. Each is taking place in one of the institutions that are currently competing to secure their reputations as authorities on Austria's prolific contribution to late 20th-century art. The Museum Moderner Kunst (MUMOK) put on the most magisterial show by drawing on its extensive archives; the Museum of Applied Arts (MAK) produced a grand retrospective of Otto Muehl; and the Neue Galerie Graz showed 'Werkumkreisung' (Work Orbit) a survey of the work of Günter Brus. (The latter was based on an earlier, slightly smaller, show in Vienna's Albertina, a museum that under its new Director, Klaus Albrecht Schröder, has become a major source of blockbuster exhibitions.) More than 30 years after the heyday of Actionist attacks on conservative Austrian society, Brus and Hermann Nitsch have become establishment figures. Otto Muehl, on the other hand, went his own way, founding a commune in 1970 and never giving up his idea of 'radical desublimation'. In 1991 he was sentenced to seven years in prison for sexual offences involving minors.

In Viennese museum politics differences between these artists tend to be played down in favour of mythologizing 'great men', with little interest in a broader view on the society the artists were reacting to. As a movement, Viennese Actionism, which had its roots in the conventional academic art schools of the early 1960s, was pretty much over by 1970. In 1965 Brus painted himself white from head to toe, with a black line down his middle as if to slice himself in two, for his famous Wiener Spaziergang (Vienna Walk). The same year he also painted a homage to Egon Schiele in ink. Muehl wanted to go beyond painting towards a Totalaktion (Total Action, 1965) that was supposed to culminate in Totalrevolution (Total Revolution, 1970), but his schemes resulted only in communal living and group therapy. Hermann Nitsch based his theory of the Orgien-Mysterien-Theater (Orgies Mysteries Theatre) on his own version of the Oedipus myth, written in 1964. In June 1969 Rudolf Schwarzkogler, the most Conceptual of the artists but also the most vulnerable of the group, fell out of a window in Vienna and died. Brus went into exile in Berlin to avoid the jail sentence he had been handed for allegedly showing disrespect for the Austrian anthem during 'Kunst and Revolution'.

By this time Viennese Actionism was widely considered as a variation on Happenings and Fluxus, for example in Harald Szeemann's 1970 exhibition of the same name in Cologne. Within Austria the process of canonization was already in full swing: Peter Weibel and Valie Export published Vienna: An Illustrated Manual of Viennese Actionism and Film (1970), a comprehensive overview that made the point that many of the films not only documented the Actions themselves but were also important contributions to avant-garde cinema. Recent Austrian shows on the subject that focus on individual biography naturally favour continuity rather than disruption, and individual expression over collaborative (and frequently chaotic) work. In the case of Brus the crisis of 1970 led to a new beginning when he produced Der Irrwisch (The Imp, 1970), an experimental novel/ artist's book about the Oedipal conflict, in which text and illustrations were given equal importance. In all of his works since then, Brus seems to have closed the chapter on Actionism - he no longer considers his body his most important medium. Occasionally he even approaches the Symbolism and Magic Realism that had been dominant in Austrian art before the 1960s.

The case of Otto Muehl is different. The title of the show at MAK, 'Leben/Kunst/Werk Aktion Utopie Malerei 1960 -2004' (Life/Art/Work Action Utopia Painting 1960-2004), makes many claims about the direction Muehl was taking. He was always the most explicitly sexual alpha male among the Viennese Actionists. For a 1970 film he reinvented himself as Der geile Wotan (Horny Wotan). Over the course of 20 years he established an alternative society called the Kommune Friedrichs-hof, which eventually bought property in Burgenland (the poorest Austrian province, east of Vienna) and on Gomera in the Canary Islands. The rapidly expanding group, well connected within Vienna's socialist establishment under the progressive government of Bruno Kreisky, was based on the principles of Aktionsanalyse, an eclectic theory about sexual and political liberation based on releasing the 'biological energy' of the individual. Since the experiment collapsed in the 1990s and Muehl's imprisonment, many film documents of that time are now classified, because of claims for breach of privacy. The obscure Sweet Movie (1974), by Dusan Makaveyev, nevertheless still contains footage documenting the way the 'Muehl Kommune' organized regression and excess: eating and excreting, oral and genital sexuality became one. Art production was made part of polymorphous group action along the way.

In his paintings and statements Muehl never stopped pursuing a 'primal state' in which the (male) individual can become a baby again, without having to dispense with the phallus. The show at MAK in fact shows Muehl, who was released from prison in 1997 and now lives in Portugal with a core group of followers, as an unbroken phallic presence clearly visible in the monumental display of many large canvases. It raises the question of whether the most important lesson of Viennese Actionism is about the art of persisting.

None of the Austrian exhibitions on the subject tries to develop an intellectual framework other than the one offered by the protagonists themselves. As a result the artists end up in a similar position as in the 1960s: lacking any sort of intellectual challenge. While they were misunderstood as criminals then, their success now seems simply too easy.