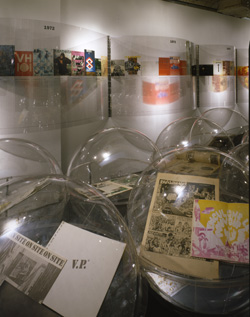 By the early 1960s industrialized societies had begun conforming to the binary realities of computer bureaucracy, automation and standardization, often symbolized by the punch card. ‘Do not fold, spindle or mutilate’ became part of the vernacular. In a 1964 speech at the University of California, Berkeley, Free Speech Movement leader Mario Savio declared: ‘There’s a time when the operation of the machine becomes so odious, it makes you so sick at heart, that [...] you’ve got to put your bodies upon the gears and upon wheels [...] and you’ve got to make it stop. And you’ve got to indicate to the people who run it, to the people who own it, that unless you’re free, the machine will be prevented from working at all.’ His revulsion was provoked as much by society in general as by the tyranny of information technology.

Even architects, hardly on the sansculottist forefront, joined the fray with a fistful of little magazines that appeared from the early 1960s until the end of the 1970s. Often typewritten and mimeographed, the publications were a hotchpotch of graphics, typefaces and images, bound by no more than staples or folded into a pamphlet, even nestled in a small pouch: ‘cheap, cheap, cheap’, in the words of Peter Cook, editor of Archigram from 1961 to 1970. Long before the invisible networks of the Internet and mobile phones, these handmade bulletins were a means to connect. As Hans Hollein, editor of BAU from 1965 to 1970, noted: ‘We were just interested in communicating our ideas, the ideas of others, and in getting in touch with others.’ Piero Derossi of Fotoromanzi said: ‘The second [issue] was titled Utopia, the first was Lotta per la Casa (Struggle for Housing). We thought, “We architects also want to change the world”.’

Culling a genuinely representative sample, in ‘Clip/Stamp/Fold: The Radical Architecture of Little Magazines 196X – 197X’, Princeton University curators Beatriz Colomina, Craig Buckley, Anthony Fontenot, Urtzi Grau, Lisa Hsieh, Alicia Imperiale, Lydia Kallipoliti, Olympia Kazi, Daniel Lopez-Perez and Irene Sunwoo devised an installation both graphically and spatially elegant as well as academically illuminating. The exhibition drew from 70 magazines produced in over a dozen cities in Europe and the United States, many of their covers reproduced on specially made wallpaper, the repeated pattern suggesting the unexpected convergences brought about by these modest dispatches. A few facsimiles of the originals were clipped informally on fishing line along part of one wall. Archival editions floated in three clusters of Perspex pods, some the size of a beach ball, some a bit larger. Despite being so typical of the era, these transparent spheres, delicately balanced on music-stand struts, averted any hint of parody.

Quite the opposite: the pod clusters – seemingly lifted directly from a late 1960s’ Pan Am lounge or the set of 2001: A Space Odyssey (1968) – amplified the exhibition’s driving impulse: properly to contextualize these quietly radical little magazines conceptually, culturally and historically. A series of Perspex panels, installed in a flat-then-bellied-out pattern that suggested water, light or sound waves, occupied the longest wall. Each panel included two or more concise, pithy entries, distilled by individual curators from interviews and archival materials from 1962 to 1979. Overhead, audio excerpts of interviews with many of the publications’ founders and contributors rippled from a few focused loudspeakers, the effect convivial, even conspiratorial. The participants’ voices provided a corollary to the tactile physicality so vital to these experiments and projects, which were conversations on paper.

By necessity and definition text-heavy, the installation had an appealingly low-tech basis perfectly in keeping with the spirit of the periodicals and their creators. Particularly inspired was a delicate timeline that threaded across the bottom of all the panels. This slender chronicle made predictable note of architectural highlights – publications and exhibitions – but also provided a witty sense of the world at the time. Alongside the Cuban missile crisis in 1962, for example, was the Telstar satellite’s first transatlantic television picture; four years later the Black Panther Party was established, as Star Trek aired its first episode; 1969 saw the My Lai massacre, of course, but also the first automatic teller machine; and by 1976 not only had Umberto Eco published A Theory of Semiotics but the Ramones had released their first album. Among the last nail-in-the-coffin events was Margaret Thatcher’s rise to power in 1979.

The only minor drawback was that the succinct, though not byte-sized, presentation assumed a conversant familiarity with architects and architectural practices perhaps unknown to many viewers. Nonetheless, it was refreshing to see the concepts of like-minded community and direct participation of the time – many of them in the interim seemingly wrung dry by advertisers – revived in an installation itself collaborative and risky. While many of these unconventional publications were produced in limited editions, experimental formats and sometimes disappeared from circulation as quickly as they had materialized, they had their impact. Gambling on an appetite for substance over packaging, the curators served up a veritable feast for thought.