Has the magnitude of China’s second Cultural Revolution only been noticed by those with vested interests? 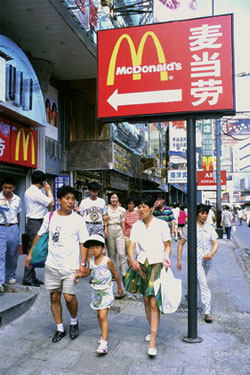 My first visit to Shanghai was over 30 years ago, my guide a charismatic Frenchman. Well, sort of. Back then, flush with the ardour of ‘Mai 1968’ in Paris, I read and was captivated by André Malraux’s leftist romance La Condition Humaine (Man’s Fate, 1933). I read it again recently, and despite some compelling passages – the young assassin’s discovery that killing alienates the killer, no matter what the cause – this story of the bloody suppression of the Chinese communist uprising of 1927 doesn’t hold up very well. Still, it set the tone for a long literary and artistic tradition of idealizing revolution that improbably culminated in the West in the 1960s’ and 1970s’ cult of Mao. The recent publication in France of Pékin 1966: Petites Histoires de la Révolution Culturelle (Peking 1966: Small Stories of the Cultural Revolution, Oeil Électrique, 2005), an elegant, red-ribbon-tied portfolio of pictures of workers, peasants and students waving the Chairman’s ‘Little Red Book’, is proof that the cult survives in Europe despite its virtual disappearance in China. There, according to the Peking Daily, fewer than 5% of the population still use the designation ‘comrade’, and growing numbers of those employed by international companies choose foreign names. The most popular are provided by the characters of the American sitcom Friends. Just think of the audience rating statistics.

Yet television remains a state affair in China as I discovered when I went channel-surfing during my first actual trip to Shanghai several months ago. On the advice of a young Chinese painter, I stayed in the Peace Hotel, an atmospheric Art Deco relic of China’s initial modernization in which the assassination described in La Condition Humaine could well have taken place. While the general fare consisted of variety shows and talking heads in conventionally gaudy formats, the army channels, most intriguing to me, alternated between earnest discussions among soldiers, operas with martial themes and historical serials set in the 1940s, ’50s and ’60s, along with old movies from those remote but consistently heroicized decades. The actors in these dramas were appealing, the naturalist camera work unaffected, the plots uplifting and the propaganda messages reassuring in ways that reminded me of the Westerns I watched as a boy during the Eisenhower era, when the good guys always won and the townsfolk were invariably warm-hearted. AlthoughI understood nothing that was being said, I could barely tear myself away from the screen. Next to these plain but mesmerizing productions the disco song-fests and quiz shows on the other stations seemed frantically desperate to please, though to a viewer less familiar with their stock crescendos and surprises they were probably bedazzling. That these morality plays are nevertheless of interest to many Chinese was brought home to me when I paid a call on a media-savvy young video artist and found that he had been watching the same programme that I was forced to turn off when setting out to find him. And for a brief moment before he inserted his DVD into the machine we both stole a final glance at the unfolding party soap opera.

Had we watched a few more minutes, though, the dialogue between cadres in uniforms would have been interrupted by commercials in which men in expensive suits sipped Martell cognac in luxurious hotel lobbies, or happy families devoured chicken out of KFC buckets. Meanwhile, growing segments of Shanghai’s population flock to Starbucks and McDonald’s, and science-fiction skyscrapers line the river across from the old concession period banks and brokerage houses on the Bund near my hotel. As far as the eye can see in all directions spread high-rises crested with ornate rooftop structures that look like the architectural wet dreams of the late Philip Johnson, and in the vast, heavily trafficked bookshop in the neon-bright shopping district up the road the memoirs of David Rockefeller are prominently displayed.

Half a world away, in classrooms on both sides of the Atlantic, students who have barely known fundamental political or economic upheaval pore over Postmodernist texts dense with Marxist critique, in which, largely owing to the popularity of Fredric Jameson’s writings, Ernst Mandel’s rubric ‘late capitalism’ frequently appears as a free-floating term simultaneously denoting the mutations of the market economy which now drive globalization while suggesting that somehow the capitalist epoch is approaching its end. However, as foreign investment primes the Second Great Leap Forward and foreign branding provides the look of the second Cultural Revolution, it is plainly ‘late socialism’ we are witnessing in China, even as Europeans come to terms with the withering away of the Social Democratic welfare state, a phenomenon recently commemorated by an exhibition in Sweden.

What is one to make of all this? At very least that Postmodernist thinking is so saturated by nostalgia for revolutions that either failed to materialize or were endured by those whose actual experience of them has yet to be factored into neo-avant-garde theorizing. Furthermore the true magnitude of the historical shift we are experiencing has gone unnoticed, except by those – including the art world – who most frankly recognize its business potential. Between TV Mao and Martell rather than Malraux and Mandel is where it’s at, but where precisely is that?