Concerto for Voice and Machinery 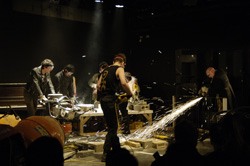 On 3 January 1984 members of the German industrial band Einstürzende Neubauten joined fellow musicians Genesis P-Orridge of Throbbing Gristle and Frank ‘Fad Gadget’ Tovey to perform a one-off piece entitled ‘Concerto for Voice and Machinery’ at the Institute of Contemporary Arts in London. By all accounts it more than lived up to Neubauten’s reputation; after 25 minutes of power tool pandemonium the performance stopped and a riot broke out in the audience, culminating in the destruction of the stage.

Directed by artist Jo Mitchell, this new performance proposed to recreate the events as they unfolded that night, with one major difference: a group of artists would replace the musicians. Ominously, an ICA steward offered free earplugs on the way in, and shortly after 8pm the performers began their sonic assault. Sparks flew as one performer took a circular saw to a metal railing while wood chips rained across the stage as another viciously attacked a tree trunk. The cacophony intensified as a third musician/artist threw bricks into cement mixers while the rest manically wielded pneumatic drills. The room filled with acrid smoke and the smell of burnt rubber. After 25 minutes the performers stopped, prompting an angry protest in the audience. Of course, we all knew it was staged, but as a furious mob started tearing pieces of MDF off the stage a thrill of excitement ran through the room – had some members of the audience become carried away and joined the stooges? One ICA steward looked worried and clutched his walkie-talkie. But the thrill was short-lived, and the performance was over by 9pm, having lasted less than an hour. As the lights came back on, one punter expressed the general feeling of befuddled disappointment: ‘Is that all we get for £12?’

It is difficult to see what Mitchell was hoping to achieve. Her intention was problematic: how is it possible to recreate a spontaneously chaotic and dangerously unpredictable event? Here everything was controlled; there was no real sense of danger in the staged mayhem. The original Neubauten musicians were able to provoke extreme reactions in the crowd because they threw themselves wholly into their performances, pushing themselves to the limit, often at the risk of getting hurt. There was no such existential physicality in this performance and none of the corresponding intensity in the audience. People came to watch the chronicle of a riot foretold, and its main merit was simply as a reminder of how extraordinary the night 23 years ago must have been.