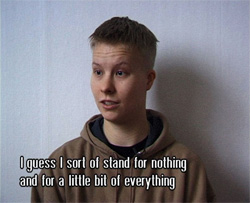 It’s hard to tell. Maybe it’s nothing more than the cyclical nature of contemporary art’s need for self-reflection, rediscovery and reappraisal. Or maybe it’s the morbid fascination that the broader culture has for once-revolutionary movements now perceived, from some perspectives at least, to have lost their sense of urgency or even outstayed their welcome. Or maybe it’s a genuine response to the complex interaction between questions of gender, civil liberties and cultural relativism in a post-9/11 world. One way or another, the legacy of Feminism has been the subject of choice for a number of substantial exhibitions over the past year, in Europe in particular. These include ‘It’s Time for Action (There’s No Option): About Feminism’ at the migros museum für gegenwartskunst in Zurich, and the second edition of the rolling curatorial project on performative practices ‘If I Can’t Dance I Don’t Want to be Part of your Revolution’, at BAK in Utrecht and Amsterdam’s de Appel, which this time focused on ‘Feminist Legacies and Potentials in Contemporary Art Practices’. Hot on that programme’s dancing heels came ‘Cooling Out – On the Paradox of Feminism’, a project co-curated by Sabine Schaschl-Cooper of Kunsthaus Baselland, Bettina Steinbrügge of Halle für Kunst in Lüneburg and René Zechlin from Cork’s Glucksman Gallery, with separate, parallel presentations at these three venues. Major Feminism shows in the USA, on both east and west coasts, are also imminent.

Whereas ‘It’s Time for Action’, in spite of its title, featured a preponderance of elder stateswomen (Mary Beth Edelson, Yoko Ono, Cosi Fanni Tutti, Annie Sprinkle, Katharina Sieverding, Manon), the Cork manifestation of ‘Cooling Out’ focused almost exclusively on the art of recent years in posing the provocative question: ‘How can a political or social movement create so many positive changes, while simultaneously developing negative connotations?’ It also included the work of a few male artists. The social construction and strategic performance of identity across cultures, especially as refracted through popular culture and the mass media, were to the fore in an intelligently crowded exhibition whose theoretical tutelary spirit, clearly, was Judith Butler. Whereas Aurora Reinhard’s Poikatyttö (Boygirl, 2002) was a series of interviews with young Finnish women who either feel like boys or feel they are seen as boys, Cabello/Carceller’s single-channel video Casting: James Dean (Rebelde sin causa) (Casting: James Dean (Rebel without a Cause), 2004) presented a filmed audition in which a procession of contemporary Spanish women in their 20s moodily inhabit the classic role of male disaffection with postwar American society. Turkish artist Esra Ersen’s interview with two young Japanese girls poring over a pile of teen magazines exposed the limited variety of young female role models sanctioned by Japanese Pop culture (basically, it’s a choice between ‘sweet’ or ‘cool’), while Elodie Pong’s Pretty, Pretty (1998–2004), featuring an interview with two cosseted 14-year-old Swiss sisters, suggested an alarming lack of social awareness or personal ambition. Dani Gal’s P-Star (2005) interview spotlighted an even more alarmingly precocious pre-pubescent rap star chaperoned by her father, whose evident pride in his daughter’s achievements in a notoriously macho profession seemed unlikely to prevent him from outgrowing his usefulness in the not-too-distant future. Local Cork artist Una Quigley’s short video Larisse (2006) presented a fully clothed lap-dancer performing her routine in the incongruous comfort of her modest living room. Brushing lightly against the grain of adverse media coverage of the exploitative aspects of this recent feature of Ireland’s social landscape, the accompanying interview spoke of empowerment and control.

While the down-to-business documentary/interview format predominated, especially in the Glucksman’s first-floor ‘black box’ space, works such as Jaki Irvine’s single-channel video The Actress (2003) struck a more wistful, melancholy note. The expansive top floor accommodated more oblique approaches to the show’s theme in a wider variety of media and, in some instances, on a grander physical scale. These included the teeming, heraldic painted murals by the group 3 Hamburger Frauen and Michaela Miese’s pairing of a seven-part series of ink and watercolour drawings ‘Frauen und Tiere’ (Women and Animals, 2001) with Untitled I (Personal Best) (2004), a free-standing painted plywood sculpture emblazoned with stills from Hollywood’s early 1980s’ take on sporty and spicy lesbianism. The increasingly ubiquitous Josephine Meckseper was represented by a number of works, including an image of the match-smoking model – Pyromaniac 1 (2003) – who also functioned as poster girl for the recent Saatchi blockbuster ‘USA Today’.

One exception to ‘Cooling Out’’s focus on recent art was a fascinating dip into the archives of Attic Press, the feminist publishing house established in 1984 by members of the Irish Feminist Information, an archive now housed in the library of University College Cork, in whose grounds the Glucksman building elegantly sits. A concurrent exhibition – ‘Gendering the Irish Landscape’ – with works drawn from various public collections in Ireland, provided some additional historical context.