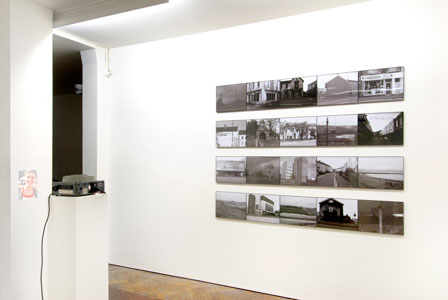 As its title suggested, ‘Three Works in September’, an exhibition by Berlin-based artist Dan Rees, comprised a trio of pieces. The first was a small photograph of a forlorn-looking panda, the second a full carousel of slides depicting a proportion of the artist’s female friends, and the third a number of unremarkable photographs of the Welsh town of Llanelli. The show seemed like it wanted to fail to such a degree that it almost hurt to look. However, if the work sounds modest, then the identity of Parade, whose diminutive space is slightly off the beaten track of east London galleries, also mirrored the work’s unassuming character. Much to the curators’ amusement, it took me three telephone calls and two walks around the building to locate the gallery.

Initially, it was intriguing to learn that the people behind the gallery – Laurence Taylor, Alexis Chan and Andrew Judd – each took it in turns with Rees to discuss a bank of ideas over a game of table tennis. This suggested allusions to the work of artists such as Július Koller, who played solitary games against a mirror, and Alighiero Boetti: Rees’ Variable Peace up to 21, (2006), consisted of an installation made of audio, video and photos that reference the Italian artist’s 1966 work Ping Pong.

However, as opposed to just being a reflective pastime (as Koller implied), these games indicate a conversational aspect to Rees’ work and a concern for communication across different media. The artist has made a series of video works entitled ‘Variable Peace’ (2006–ongoing) that picture him playing table tennis while talking with artists a generation removed from his own (the apparently incorrect use of the word ‘peace’ in each title refers to the silent moments in each exchange). These include Jonathan Monk (for whom Rees has, for a long time, worked as an assistant) and Simon Starling – both of whom are concerned with art history, narrative and repetition. In another work, made earlier this year, Rees ruined a copy of Gavin Turk’s cheeky multiple Tea Stain (2004) – a single tannin-laden cup ring stamped on high-quality Somerset paper – by adding another circular stain and re-titling it A Cup of Tea with Gavin Turk (2007). If this suggests a desire to disrupt an existing dialogue with the mythical Golden Age of Conceptual art, together with the reproduction of ideas across generations, then Rees’ performative actions are interesting because, essentially, he takes clever endgames and reinvests them with a more gentle form of mystery and humour.

Projected onto the left-hand wall of the gallery was 80 Girlfriends in 2007 (2007), an obvious rehash of Ed Ruscha’s Five 1955 Girlfriends, which was first published in 1969 for the exhibition ‘Konzeption–Conception’ at the Städtisches Museum, Leverkusen. Ruscha’s work incorporates headshots of the artist’s high school girlfriends from Tulsa, Oklahoma. Rees’ accelerated version, which shows 80 female friends and acquaintances in various social situations, dwells on his own ambition to take Ruscha’s work to its natural extreme and goes beyond mere youthful romanticism. Strangely, it focuses on a purely mechanistic form of communication through its unusually blunt means of classification, and the repetitious rhythm of the slide projector, and in doing so celebrates the difficulty of separating recent art-historical reference points. Similarly, One Afternoon and Evening in Llanelli (An Ode to Cerith Wyn Evans) (2006), which was shown on the far wall of the space, cogitates on the bleakness of Wyn Evans’ birthplace. Rees (originally from Swansea) sent Wyn Evans 40 photographs of nearby Llanelli and asked him to make a selection to be exhibited. While the decision behind each photo being taken and chosen is kept a secret, Rees’ focus on bringing the older artist’s youth closer to his own memory of the place may seem juvenile, obsessive or pointless. Yet precisely because it remains unclear why Wyn Evans selected the particular images he did, the work successfully communicates a sense of lack, and a gap between mediated forms of fact and fiction, the personal and Conceptual art history. The absent information highlights how Rees is only brought further towards his own imagination and away from actually knowing anything certain about his chosen subject’s past.

Any critique of contemporary art discourse in Rees’ work occurs in the tension between his enthusiasm and the mechanical nature of the work’s execution, and in the increasingly narrow field of reference between Rees and his immediate predecessors. One could easily have seen this exhibition as being vague and naive, but this would be mistaken. Rather than imitating the clever knowingness of certain recent Conceptually based practices, it displayed a genuine and canny curiosity for the nature of reproduction and repetition, together with a concern for the elusive blind spot at the heart of communication across time.