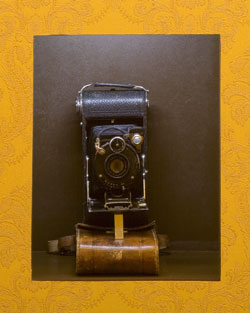 Danh Vo investigates the invisible boundaries between the public and the private, and the possibility of their porousness. He undermines the institutional (he curated an exhibition of works by well-known artists in his parents’ house in Copenhagen) as well as the personal (he has married and then divorced several people, augmenting his name with theirs but not sharing a private romantic life). He has collaborated on a project with Tobias Rehberger without declaring his co-authorship, and stolen an idea from his artist boyfriend for his own funding application. Vo adopts appropriation more rigorously than is often the case, to discover how much a person can actually appropriate. Another person’s idea? An art work? An identity? There is a constant back and forth that questions authorial status, ownership and the role of personal relationships that prevents the ‘appropriator’ from keeping the upper hand.

For his Berlin exhibition ‘Good Life’ Vo returns to his Vietnamese roots. Isabella Bortolozzi’s small gallery space has been given a lick of Asian exoticism. A dark, heavy drape curtains the glass door, golden flock wallpaper covers the walls and a chocolate brown floor creates a cosy intimacy, somewhere between a Chinese restaurant and a dusty embassy drawing-room. Along one wall is a series of small square vitrines, inset, dark and precisely spot-lit, like the windows of a high-class jewellery shop. Inside these are framed photographs, mostly black and white, of young Asian men, taken, as the titles on the neat brass name plates tell us, in Vietnam in the 1960s and early 1970s: Boy and Baguettes, My Tho, 1965, for example, or Boy by the River, Vinh Long, 1966. In one vitrine an old-fashioned camera sits propped up on its worn leather case. In another is a typewritten document titled ‘Beliefs, Attitudes and Behaviour of the Lowland Vietnamese’ and a crumpled business card, belonging to one ‘Joseph M. Carrier, National Academy of Sciences’. Presumably Carrier was the owner of the camera, an American in Vietnam during the war on an anthropological rather than a combat mission. In the images that document his time there, only the elegant military uniforms in ‘Army Boys’ and three faint smoky explosions that stain the horizon in ‘Swimming Boys’ betray the catastrophic conflict taking place.

Any implied anthropological objectivity on behalf of Joseph M. Carrier is diluted, however, by signs of his own personal ‘beliefs, attitudes and behaviour’. Among these are an attraction to beautiful Asian boys, an interest in amateur photography and a desire for closer contact with the subjects of his research. This is spelt out in a further document, a handwritten diary entry from 1965 that describes a diminishing of boundaries, a mutual curiosity and consent: ‘while my people work I play with the ex. Viet Cong […] a hand slips down and feels my larger thigh […] more play, with camera and posing.’ The gradual accumulation of homoerotic suggestion condenses in the final image, a shot from the back of two men holding hands, looking at pictures in a gallery (Cultural Boys, Saigon, 1962). A ‘Good Life’ is salvaged from the desperate situation in Vietnam, and hostility is annulled by attraction, although other formal documents detailing Carrier’s official duties hint at an awkward dichotomy between public face and private persona.

What does this material have to do with the artist himself? Vo was born in Vietnam in the year the war ended, and escaped from a refugee camp with his family in 1980 in a boat built by his father. The boat was rescued by a tanker, which took them to Denmark, where the family settled. Vo was only four years old at the time and has no memories of his early childhood in Vietnam; no photographs survive. In this sense the images and documents of Joseph Carrier present a surrogate autobiography, while simultaneously projecting forward towards a shared adult sexuality. Vo’s appropriation is not just of the images and documents (although these are, in themselves, fascinating) but of a life story. Identity, experience and interest overlap, and boundaries between the two individuals blur as Vo constructs this portrait of Carrier (as well as his homeland) through his selection of images and their evocative titles. It is crucial that Vo gained access to the material through his relationship with Carrier himself. Written by Carrier, the press release that accompanies the exhibition describes frankly his meeting with Vo as a continuation of the attraction to Vietnamese boys shown in the photographs: ‘I immediately felt attracted to him and knew that I wanted to have some kind of close relationship.’ The act of appropriation here is not only an intellectual activity but also a mutual transaction with a personal, even intimate, aspect. ‘Good Life’ becomes a complex multiple portrait of Carrier, of Vo himself and of their relationship, the bleeding of one life into another, and of wartime Vietnam.