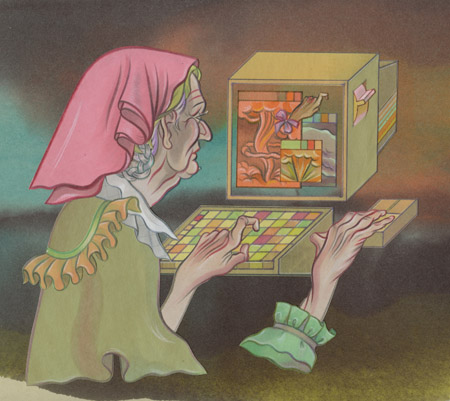 Daniel Barrow’s absorbing narratives ache in a satisfying way, layering common types of loneliness and social anxiety with those much sharper and horrifying. The Winnipeg-born, Montreal-based artist is best known for his live manual animations, plays of light and sound that reference pre-cinematic technologies. ‘Good Gets Better’, his first solo exhibition at Jessica Bradley Art + Projects focused on collaged drawings from three such performances, offering a closer look at the imagery with which they are composed.

Viewing the show was a solitary, intimate experience, in line with Barrow’s graphic style: slowly scanning and connecting the images felt like reading. People and objects alike have a wizened, foamy texture, and everything glows through a distinctive palette of dirty acid pastel. Soft details and delicate layering convey Barrow’s tender affection for his materials, as much as for the wounded individuals in his tragicomic plots.

Eighteen works from ‘Every Time I See Your Picture I Cry’ (2007–8) comprised the largest series in the show, a pared-down selection of scenes from a complicated tale (an hour long when performed). The male protagonist, nicknamed Helen Keller due to his chronic and isolating eye infections, sets out to forge connections by spying on his neighbours, digging through their trash and compiling their portraits into a unique telephone directory. Trailing him is the vengeful Bag Lady, mercilessly bullied as a youth, who violently murders each resident as they are added to the book. Through humour and terror, ‘Every Time…’ achieves a palpable sense of aloneness in the focus it provides for both creation and destruction.

A much simpler vignette plays out in ‘Trying to Love the Normal Amount’ (2009), a series of five drawings in which an elderly woman, longing for companionship, make-believes herself a baby out of a bag of onions. Collaged images from Barrow’s most recent performance, Good Gets Better (2011), depart from narrative order; heraldic and dramatically symbolic – gold, mirrors, skulls and snakes – they reel vanity, greed and deceit into compact circles. Alongside the drawings was a new overhead projection piece, relating back to ‘Every Time…’, that viewers could animate themselves with a sliding mechanism, revealing a transformed image and solemn monologue (‘I also listen, almost exclusively, to the same, beautiful songs I did in high school’). However, the tracked movement felt controlled next to the swirling, expanding energy of the works on paper.

This exhibition coincided with Barrow’s deserved win of the 2010 Sobey Award, Canada’s top prize for artists under 40, which should lead to more international visibility and demand. These drawings and the performances they develop into can’t be rushed – they evince the same methodical, obsessive engagement of many of their characters, a dense, exacting process that takes time to work its way through.