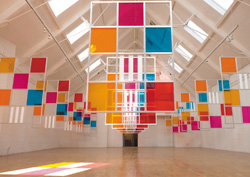 In 1973 Modern Art Oxford commissioned Daniel Buren to create a large installation for the gallery, at that time a more modest exhibition space than in its present, expanded form. He hung a series of loose, billowing canvases inside the single upper room of the building, emblazoned with the artist’s signature imprint of parallel, vertical stripes, each measuring exactly 8.7cm in width. For ‘Intervention II, Work in situ’ (2006), part of an ongoing project in which MAO offers established artists a chance to show there for a second time, Buren characteristically took the building’s architecture as his point of departure. On this occasion he used the three large windows located at one end of MAO’s Upper Gallery as templates for a sequence of some 15 rectilinear panels, each suspended from the ceiling and arranged in three rows, neatly echoing the placing and proportions of the windows themselves. Each of these panels was subdivided – again like the windows – into 12 squares of transparent Perspex (both coloured and clear), through which one could easily see both the full extent of the gallery space and a complicated overlay or interpenetration of its constituent elements.

A second, smaller gallery was dominated by a large-scale chessboard pattern painted onto all four walls. These fixed (and again coloured) grids were supplemented by a number of transparent sliding panels mounted on tracks fixed to the floor – an arrangement that encouraged audience participation and the recognition that a relatively limited range of colours and shapes can be used to generate an almost infinite variety of results. In a third, much smaller, room were displayed several of the artist’s working drawings for the planning and realization of the current installation.

Buren’s technical means display an elegant economy of execution, giving rise to a powerful array of aesthetic and conceptual effects. His work is both a reduction and simultaneously an expansion of painting, stripping down the potential complexity of what we might term the conventional canvas to a token or cipher of the form itself. Buren’s extension of painting into architecture also offers a redesignation of sculpture’s physical, theatrical or spatial positioning as a mode that is, once again according to Renaissance and Modernist traditions, independent of the spaces into which it is placed. Merging architecture with painting, and positioning it as though it is sculpture – not exactly free-standing but, rather, occupying its own semi-autonomous sphere – gives a further twist to that most uncannily productive of historical objects, Marcel Duchamp’s The Bride Stripped Bare By Her Bachelors, Even (The Large Glass) (1915–23). Both the hanging and sliding panels in this exhibition were reminiscent of this work, but they also suggested, in their geometric and tightly structured arrangement, the work of Piet Mondrian, Kasimir Malevich or Sol LeWitt.

A further level of reference is brought into play when one considers the layering afforded by the physical transparency of the panels. The consequent intermingling of colours, together with the complex compositional permutations thus facilitated, bring to mind an older art form: the stained-glass window. Buren’s practice points both to the past and to the future, to established tradition and to innovatory rearrangements of relatively recent forms, and even of whole cate-gories of art.

MAO’s Upper Gallery is, during the day, illuminated both by skylights and windows, and these were certainly put to good effect. Some of the less prominent windows in the building were half obscured behind striped cloths, arranged so as to break up the surface areas of the window into serrated columns. Although these details changed according to the weather conditions prevailing outside, the most significant colour combinations and transformations were evidenced by the changing patterns of light that occasionally appeared on the gallery floor. What seemed to be taking place, metaphorically at least, was the gentle but knowing dissolution of the institution, of the gallery as specialist container of art, if not of art as institution as such. The kind of results to come out of Buren’s massive amalgamation of plastic, brick, wood, paint and constructive perseverance might, at the visual level anyway, occur in any domestic or public space; Buren had speeded up the process, providing a machine tightly attuned to the making of incidental effects and their contingent – but not indifferent – associations.