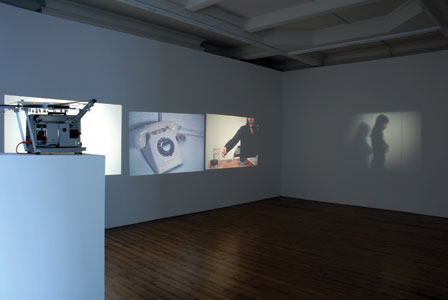 ‘A woman walks down a path, gets into a car, gets out somewhere else, walks into a building and down a hallway into a sparsely furnished flat, looks out of the window, sits down at a desk, leafs through some papers, smokes a cigarette, and upsets a glass of water. The telephone rings while she is cleaning up. She answers it, speaks, hangs up, picks up her things, leaves the flat, and finally turns to face the camera that has been following her.’

It should be a distinct no-no for a press release to flatten the action of a film into such a deadpan script, but for David Lamelas’ Film Script (Manipulation of Meaning) (1972) it is actually rather enlightening. Rather than exercising Alain Robbe-Grillet’s method of unremitting description as a representation of the essential meaninglessness of the world, this text demonstrates a contrary tenet of Lamelas’ work: how any mediation of an event can divert emphasis and thereby create or obliterate meaning.

The scenario is enacted naturalistically and finds its eventual form as an installation of static and moving images, with a 16 mm film projected at right angles to three concurrent slide projections. Mostly the stills corroborate the action in the film and concur with one another. At times, though, a slide image diverges from the film’s version of events so that the timing appears to alter. They are not cataclysmic shifts but minor inflections on causality or perspective – one image may prioritize the woman, another the telephone, or we may see the protagonist put a packet of Gauloises in her bag and then pick them up off the table. This is an insignificant story, and we are being made privy to apparently inconsequential mediation.

Much of Lamelas’ film work employs reductive narrative, eschews theatricality and favours the information aesthetic of Conceptualism, and yet it retains a dash of lyricism that would have been expunged by the stauncher Structuralist filmmakers of the time. His preoccupations are not so much the structural and formal capacity of film itself as how producers formulate and viewers assimilate this. The subtitle, Manipulation of Meaning, is the inflatable hammer over the head that drives the point home: if we can detect the forces of fiction in something as mundane as this, then what if we extrapolate to the emotional, social and political realms? This is not rocket science to those versed in Marshall McLuhan, Noam Chomsky et al., but when this film was made the mechanically produced image still retained the vestiges of documentary status. In Britain now, though, where we are so conscious of media manipulation that we have entered into an almost carnivalesque state of reciprocity with it, the simplicity of Film Script almost forces us to read it entirely as formal choreography.

In fact Lamelas has, in the past, discussed time – and light as film’s mediation of time – as sculptural material, regarding information or content as incidental. In an interview with Pascal Beausse and Pierre Bal-Blanc he perversely claims the neutral ground of abstraction when discussing his piece for the 1968 Venice Biennale, The Office of Information about the Vietnam War at Three Levels: The Visual Image, Text and Audio: ‘I didn’t want to make art that was political. I chose the topic because it was the most important information at the time. I didn’t want to make something against the Vietnam War. It would not have been my choice to be a critic of the political system at that moment. It was the information itself that interested me.’ Although it is possible to appreciate the formal folds and pleats of Film Script, it is difficult to square such claims of abstraction with a stream of Telexed reports on the war or even, in a less spectacular register, the photographic series ‘London Friends’ (1974).

The particularity of Lamelas’ art-world subjects – friends and colleagues such as Nigel Greenwood and his then assistant Lynda Morris (the star of Film Script) and Marcel Broodthaers – are impossible to ignore. Photographed by a fashion photographer, each sitter strikes a pose that we have come to expect from the genre, constructing a tautology of sorts, whereby those portrayed pre-empt the methods of portraiture. Lamelas’ choice of subjects presents us with another layer to the conceptual onion, as he articulates the divisiveness of a notoriously adulatory and fickle genre through the participation of those who have been aggrandized by history. Although the basic message is again a pretty simple treatise on the power of the image, the work has gained a dubious complexity through the canonizing properties of time.