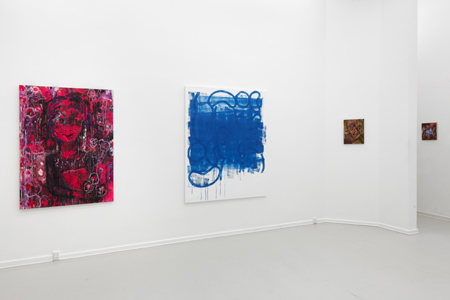 A ridiculous clown-like figure with a cartoonishly outsized paintbrush chants ‘De Kooning, De Kooning, De Kooning…’ as he presses a tube of paint larger than his own body up against a canvas. Continuing his mantra, he spins around the studio, presumably in search of divine inspiration. This refrain – in Paul McCarthy’s 1995 video Painter – lent its name to a group exhibition at David Risley Gallery curated by one of last year’s Turner Prize nominees, Dexter Dalwood. In an examination of the current state of expressionist painting, Dalwood assembled recent works by six artists – from the UK, Denmark, Uruguay and the Faroe Islands – alongside McCarthy’s satirical piece.

The works included Sofie Bird Møller’s thick smears of paint on a page of a fashion magazine editorial (Untitled, 2010) and Nathan Barlex’s beeswax-and-resin-covered canvas, Tissue Expander (2010). The latter’s works are dense and overpowering: glossy layers of paint serve to conjure a putrid mass, potentially emanating from bodily tissue. Similarly saturated, Giving up the Ghost (2010), Vanessa Mitter’s heavily dripping portrait of a girl, brings to mind the work of CoBrA artists with their impasto and flooded surfaces. In contrast, Jill Mulleady, Stuart Cumberland and Rannva Kunoy offer up lighter palettes. The brushstrokes in Mulleady’s Door to the Ocean (2010) somehow brought to mind De Kooning – not necessarily Willem, but Elaine – while the smudged lettering in Kunoy’s Poe-Naw-Grah-Fee (2010) hints at narrative rather than a purity of medium.

One striking fact was that four of the six artists represented here were women, a definite development that set the works in the show apart from historical Abstract Expressionism and Neo-expressionism. The gallery’s press release quoted art historian Arthur C. Danto in a panel discussion published in Artforum in 2003, in which he posited that the alleged death of painting in the late 1980s was a reaction against the neo-liberalism of the Reagan years and the establishment of painting as luxury commodity. In the same discussion, apropos female painters of the 1970s such as Lee Lozano and Dorothea Rockburne, David Reed remarked: ‘It’s very strange that the history of painting could be thought to end just as women were beginning to make their contributions. Perhaps, instead, it’s only the idea of the heroic male genius that has died.’ The overblown character in McCarthy’s piece is, undoubtedly, the male Abstract Expressionist. The figure of the heroic painter has always been gendered, and to the extent that it is still invoked, knowingly or not, it continues to be. Thus four women out of six expressionist painters, in a show curated by a male artist, remains a refreshing figure.

Can a group show begin to articulate a theme or answer a question if it consists of just a handful of works displayed in a small gallery space? In the case of Dalwood’s show, these limitations did not render the exhibition innocuous or uninteresting, but it did leave it somewhat wanting. On the other hand, it was perhaps apt to balance the large aspirations of the exhibition with its modest scale: the artist offered no pretence of providing a complete answer or overview, but simply presented an intimate set of possibilities. ‘De Kooning, De Kooning, De Kooning…’ dispelled the notion of the mythic immediacy of the medium or of a singular expressionism in painting today; at the same time, it allowed the legacy of the show’s eponymous painter and his colleagues to be easily traced.