Predicting the future of the art market and criticism 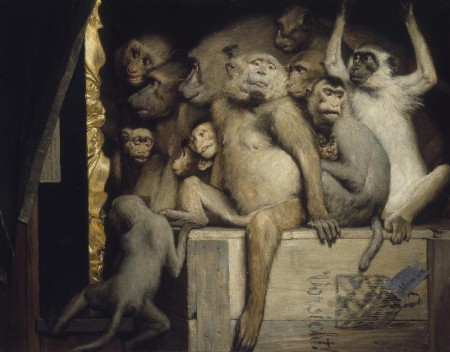 In a speech last March, Barack Obama, who will win the White House next month, called for a fundamental renovation of financial regulatory policies, linking the sub-prime crisis to lax oversight. It was by then too late to stem the tide of the current catastrophe. Even in Obama’s second term his administration will do no more than begin the recovery – following the Great Depression it took 29 years for the market to regain its pre-Depression, inflation-adjusted peak – and no one should expect the United States to reemerge in a position of leadership when the upturn does arrive. Just 32 years ago, as the U.S. celebrated its bicentennial, such a scenario was unthinkable – the decline of the U.S. has no equivalent in living memory.

And where is the art world in all of this? It is exercising its political arm, as it does every fourth year in the U.S., by holding benefit events for the Democratic National Committee. Yet amidst the financial crisis, by plan and coincidence, it’s worth noting that a re-invention of the art market’s basic business model is afoot. By coincidence, Sotheby’s opened its doors to the Damien Hirst auction – which capably garnered US$200.7 million in sales – on the same day that Lehman Brothers filed for the biggest bankruptcy in history. There is nothing rapscallion about this if you can agree with critic Robert Hughes, who sensibly concedes that: ‘On the whole, money does artists much more good than harm. The idea that one benefits from cold water, crusts and debt collectors is now almost extinct, like belief in the reformatory power of flogging.’ Oliver Barker, Sotheby’s head of contemporary art in London, explained things from his side: ‘We’re still appealing to a small percentage of the world’s population, these people are sophisticated and they still have budgets for art.’

First framed as the herald of invulnerable economic strength within a fraction of the world’s population, auctions have since seen downturns, suggesting that the appeal of Sotheby’s waned as the worst financial crisis in 80 years began to sink in. Who bought? At the Hirst price-point the affair was a spectator sport for dealers and museums. Americans were noticeably absent though new collectors from the Middle East, Asia and Russia were active; unwittingly or not, they did the heavy lifting to put the new business model in place.

This model has been in the planning for some time though for many it may have been difficult to predict. One of its architects is Marc Porter of Christie’s, who, with admirable realism, reasoned: ‘To presume that the golden day of the ’60s and that gallery system is what’s appropriate in a global art world may be a great disservice to artists and to collectors. What we’re doing is ensuring that the art business evolves, so that the people who use the business are best served.’

Porter’s business model is as old as business itself: cutting out the middleman. An auction now provides the instrument for artists to bypass their galleries, along with their 50% commission on sales. In Hirst’s case, with the help of the auction house’s ample experience, he marketed less the works of art to be auctioned than the pending scarcity of the signature themes that define his brand. In the run-up to the auction Hirst said that he would no longer be making spin paintings and that there would be far fewer dead animal sculptures, sending the signal that this would be the last chance to acquire a hallmark work outside of the inflationary re-sale market. So the Hirst auction was a matter of selling variations on popular themes to new collectors who believed that they were in a market with built-in shortages. Seen in this light the phenomenon seems no more than routine business; create pitched desire in a marketplace defined by scarcity.

While unlikely to overturn the old-fashioned business model all at once (selling art using the gallery’s prix fixe convention), casting the gallery as a business with fewer financial advantages for the artist is a paradigm shift with long-term consequences. In the short-term, artists who command certain price-points will begin sending new work directly to auction with the immediate side-effect of helping to magnify and further marginalize the existing underclass of artists and galleries. Eventually, the financial might of the auction houses will lead to the consolidation of the art business under a few owners just as in book-publishing, or the ongoing acquisition of private farms by international agri-businesses. It is not a matter of if but when the most powerful galleries shift their business strategies towards becoming small-scaled auction houses to protect their brand by keeping their most lucrative artists from migrating to the established houses. In the meantime, auction houses will follow Christie’s lead leveraging its supply of art for auction through its acquisition of Haunch of Venison.

This new business model will affect other sectors of the art world. Stories of art critics shaping what Harold Rosenberg once called ‘the herd of independent minds’ by sparking feeding frenzies around an artist’s market are legendary. But by contrast, Jerry Saltz opines that, ‘At no time in the last 50 years has what an art critic writes had less effect on the market than now’, which warns us that if art criticism’s influence on the market is waning now, it may well vanish in a marketplace ready to accommodate the ‘studio to auction’ business model.

Saltz’s statement implies a certain freedom for criticism, but could it also spell out its inevitable irrelevance? When significant artists from our era begin by-passing galleries, the traditional hunting grounds for critics, auction houses will be better positioned to take a firm hold on drafting history, if not manufacturing it all together. And this trend will only be encouraged if critics from the intelligent magazines and newspapers fail to lift their self-imposed moratorium on reviewing auctions for fear of gaining back some of the influence Saltz sees fading. The dog just caught up with its tail.

Yes, we can expect art criticism to continue its ennobling role as history’s first draft, but to what end if the history scripted by the auction houses drowns it out? Already anemic, art criticism then becomes a debating club monitoring the underclass of artists, churning out drafts of their history, before becoming invisible when the auction houses begin to publish their own histories of art – a (marketing) move being incubated in publications like Sotheby’s Preview Magazine.

How does the following assessment sound? ‘To presume that the golden day of ’60s art criticism is what’s appropriate in a global art world may be a great disservice to artists, to collectors, to art institutions and to history itself.’ Can we detect any immediate effects on art criticism in the aftermath of the Hirst auction? Well, try to find a review of Hirst’s Sotheby’s exhibition ‘Beautiful Inside My Head Forever’, which also happened to preview the works for auction, and what you will find are forecasts of the restructuring of the art market (September 17, 2008, Wall Street Journal), news round-ups in the entertainment section (September 7, 2008, The Times), and plenty of blogs fed by the inferiority complex that camps out in the underclass of artists, but no reviews in the conventional sense.

Art critics either underestimate the impact of this new model for exhibiting and selling art, or are unwilling to acknowledge it out of some ethical prohibition that decrees auction houses off-limits. I wonder if the readership noticed the difference when the vacuum of criticism was instantly filled by infotainment?

While time will tell how the art market will weather this long-term financial crisis, the timing of introducing the ‘studio to auction’ model as the global markets began to collapse yielded a far more vulnerable position for the galleries than auction houses. The galleries that will survive are the ones prepared to adapt to this unfolding complex of disruptive business innovations without giving in to it. That’s realpolitik in the art world. With Obama in the Oval Office perhaps the idea of change may become so infectious that even art critics will feel liberated, adapting their methods and means to account for this striking business model without fear they would be shouted down as art market collaborators. Art criticism, were it to extent its reach beyond art’s appraisal, by taking a fundamentally different approach to defining problems and solutions across disciplines, may then subject the auction houses and their subsidiaries like Haunch of Venison, to critical analysis on a number of fronts simultaneously. At the moment art critics are in default mode: escalating moral indignation over the dirty business of art. Tsk-tsk! I believe that segments of the discipline will abort their righteous anger act and change the form of its critical voice, otherwise we will be witness to the last writers to believe art criticism was a great power and the first to confront a dilemma which proved it was not.