The best of 2008, from the Olympics to Obama, Macguffins, museum shows and new coins 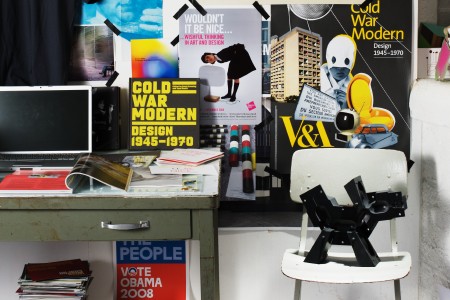 In 2008 the most populous nation on earth threw the world’s most elaborate party. The opening ceremony of the Beijing Olympics featured 16,000 performers, and its extravagant choreography took seven years to plan. Acrobats danced on the surface of rotating spheres and a giant type press morphed into the Great Wall of China. By contrast, Britain’s embarrassing closing-night handover show, in which David Beckham and Leona Lewis pranced atop a double-decker bus, was a low moment for design. A more sophisticated British offering came in the form of a promo for BBC Sport’s Olympics coverage. Monkey: Journey to the West was a beautiful display of animation gymnastics created by musician Damon Albarn and graphic artist Jamie Hewlett, of the virtual band Gorillaz. The two-minute piece was based on the 1970s television show Monkey and the anonymous Chinese novel Journey to the West (c. 1590). It follows Monkey, Pigsy and Sandy as they swim, javelin-toss, pole-vault and hurdle their way to Beijing. Thanks to the gorgeous art direction, great music and a compelling narrative, the animation is wry and wistful rather than goofy.

There were plenty of excellent design exhibitions in 2008. Surveys of contemporary themes and preoccupations in design, such as design’s relationship to science and technology or architecture and art were explored in the much-lauded ‘Design and the Elastic Mind’ at MoMA New York, ‘Forms of Inquiry: The Architecture of Critical Design Practice’, at the International Artists’ Studio Program, Stockholm, (originally shown at London’s Architectural Association in 2007) and ‘Wouldn’t It Be Nice: Wishful Thinking in Art and Design’, at London’s Somerset House. In this last show, of particular note was conceptual product designers Noam Toran and Onkar Kular’s ‘Library of MacGuffins’ (the ‘MacGuffin’ is a term coined by Alfred Hitchcock to describe a cinematic plot device that motivates the characters and propels the narrative – a stolen jewel or secret document, for example). Over the course of the exhibition, Toran and Kular wrote a series of film synopses around their own MacGuffins – objects that they then designed and manufactured on site using a rapid prototyping machine. Gary Hustwit has been working on a new feature-length design documentary. This time, the director of Helvetica (2007) turns his incisive lens to the subject of industrial design. The film, which opens in early 2009, features designers and commentators such as Ronan and Erwan Bouroullec, Anthony Dunne, Jonathan Ive, Hella Jongerius, Alice Rawsthorn and Rob Walker. With equal airtime given to the perspectives of both designers and users of objects, the film promises rich insight into the thinking behind, and the implications of, our manufactured environment. Meanwhile, on the design-historical front, Sydney’s Powerhouse Museum used objects and art works to trace for the first time the impact of Modernism on Australian culture in ‘Modern Times: The Untold Story of Modernism in Australia’. And at London’s Victoria & Albert Museum the excellent ‘Cold War Modern: Design 1945–70’ exhibition provided a deep-probe exploration of design’s role in both representing and resisting Cold War politics. Belgium claimed stand-out pavilion status at the Venice Architecture Biennale in 2008. Office Kersten Geers David Van Severen responded to the enigmatic title ‘1907 … after the party’, creating the aftermath of a centenary celebration that never actually occurred in commemoration of the lauded 1907 Belgian Pavilion. They emptied the original pavilion and enclosed it in a wall of galvanized steel, like a wrapped gift. Inside the abandoned and eerily quiet space, visitors found chairs in random groupings and the floors awash in confetti. Office KGDVS’s bittersweet conceptual statement elegantly focused attention back on actual architecture amid a festival increasingly devoted to its image. Many in the design world will be experiencing something of that ‘after the party’ hangover from 2008. Following a period of excess in which Christie’s held its first contemporary design auction (with a Ron Arad mirror-polished stainless-steel sofa fetching $206,500), and designers were fêted by design fairs from Milan to Miami and urged by commercial galleries to produce limited-edition furniture and objects, the economic realities of the coming year will be sobering. With any luck the recession may encourage more thoughtful design and reduce careless production, to the benefit of the environment. It’s apt that, as we’re about to be focusing more on our pennies, the 26-year-old graphic designer Matthew Dent’s new coins have begun to circulate in the UK. Dent’s design encourages contemplation. An image of the shield of the royal arms is split like a jigsaw puzzle between all six coins, culminating with the one pound coin, which displays the image in its entirety. In the Netherlands too, a beautiful new five euro coin has appeared. Based on the subject ‘Netherlands and Architecture’, the reverse side of Stani Michiels’ rigorously conceived design features a selection of books by Dutch architects arranged around the circumference of the coin. They rise toward the centre like skyscrapers, with the patch of sky between them forming the shape of the Netherlands. Of course, the biggest design story of 2008 is how Barack Obama’s magnificent election campaign introduced the concept of considered design to politics. Design was operating on two planes. At the level of orchestrated design there was the elegant logo by Sol Sender and consistently razor-sharp creative direction of the website and all the campaign’s graphic materials by John Slabyk and Scott Thomas. Mirroring the presidential contenders’ characters in real life, the Obama website remained calm and focused, with every detail taken care of – from the choice of workaday Gotham as its font to its custom-designed icons. The McCain site was in a visible state of panic, with a hundred elements competing for attention, its stock photos and icons and its questionable use of Optima, ‘the font of choice for the hygiene aisles’, as the type designer Jonathan Hoefler has put it. At street level, there was an explosion of ad hoc Obama graphics in the form of screen-printed posters featuring Obama’s head silhouetted Che Guevara-style, buttons and T-shirts galore. Ultimately, both the official and the grassroots design output were integral to the larger message of hope and change. The 5 November 2008 edition of The New York Times has become a collector’s item. Its cover featured a huge photo of the victorious Obama family and the simple headline ‘Obama’ in type as large as 96 point, for only the fourth time in the newspaper’s history. A few days later, liberal pranksters the Yes Men produced and printed a parody newspaper dated 4 July 2009, which they distributed to commuters on the New York subways. The banner headline announced the end of the Iraq War, and the stories reported the successful resolution of problems created or ignored by the Bush administration: ‘Maximum Wage Law Passes Congress’, ‘All Public Universities To Be Free’ and so on. This spoof was a great example of positive criticism – of satire that doesn’t merely attack the direness of the current situation but also presents an optimistic vision for the future.