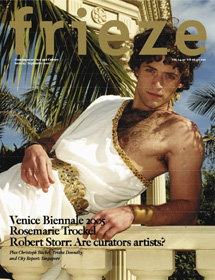 Poor Friedrich Nietzsche. It isn’t enough that he died alone and mad; now he is being trotted out like a mascot to affirm a pathetic exhibition’s nihilistic impulse. Demented and syphilis-ridden, Nietzsche dreamt up anti-Christs and Übermenschen as he pushed the limits of sanity and philosophical thought; in short, he knew something about excess. And despite the radical potential of an exhibition inspired by Dionysus, the god of orgiastic transgression championed by Nietzsche in The Birth of Tragedy (1886), there was little that was unruly about this show. Most of the works were decidedly tame and inoffensive. On entering one immediately saw the Vienna-based group Gelatin’s Play-Doh portraits and saccharine sculpture Cockjuice Joe (2004), which takes the biscuit for cutesy ‘radical’ chic. Even a provocateur such as Kendall Geers rehashed ho-hum clichés in La Sainte Vierge (The Holy Virgin, 2005) – a mural triptych of spreadeagled babes drippy with black ink in a Jackson Pollock-meets-Rorschach-test style. Real broken wine bottles at their feet reminded museum visitors that they had missed the opening party. And what a party it must have been, since one would have seen the show’s only female participants – hired hostesses handing out champagne-filled, penis-shaped glasses for Geers’ performance. But not to worry; the Baccarat crystal vessels were limited edition pieces. How excessive indeed.

Curator Christine Macel’s all-male artist list as well as her preposterous defence of it and the limited ‘America–Europe axis’ of her selection were perhaps the most absurd and vulgar elements of the show. The exhibition’s main problem, however, was the essential disjuncture between its claims and how one experienced the works in situ. Part of my disappointment was the dashed hope that such a show would shake up the now staid Centre Pompidou. That aside, I expected it to at least find a display mode appropriate to its subject. Instead, a series of smallish white museum spaces domesticated the works, neatly dividing one artist’s pieces from
another’s and disciplining what might have appeared chaotic and disruptive into the most orderly of confines. Hardly a curatorial vision of mayhem. Indeed this display aesthetics of the art fair solo show booth made for the least anarchistic museum show I have seen.

The only pieces that managed to get around this were those that pushed at the limits of their space. These made up the few remarkable and truly subversive pieces of the show. Thomas Hirschhorn’s Jumbo Spoons and Big Cake (2000–5) entirely covered the room with a dense installation of his signature cardboard, packing tape and aluminium foil in the form of grossly oversized spoons, crude shrines (to the likes of Nietzsche, consumerism and Hitler’s ‘Degenerate Art’ show) and a pink papier mâché cake, around which reading material hung from metal chains. To begin to take in the mass of books, photocopied pages, statistical charts or video programmes tracing an anti-narrative of economic disparity, failed Utopias and global capitalism is to understand that this chaos announces one of the most engaged and unrelenting efforts towards political art-making today. Jonathan Meese provided another shrine, no less troubling for its nobler materiality. Deformed bronze busts of Nietzsche, Richard Wagner, Fu-Manchu or Meese himself, as Son (2004), were arranged on pedestals in front of a 12-metre long painting in a cramped room. Mixing religion, mythology, historical figures and a monstrous aesthetic, the whole felt like a creepy family portrait show in a broom closet.

Utterly disquieting. In one of the larger rooms Paul McCarthy and Jason Rhoades’ collaboration Sheep Plug (2005) filled the space with the overabundant traces of their messy production of gigantic butt plugs. The odour of the sheep fat used as the main ingredient, as well as the canned shit used in a previous project, induced its own olfactory transgression. When you left the room the noxious smell stayed with you, effectively trespassing the museum’s white walls.

Maurizio Cattelan’s apparently scary performing man in a mask Punki (2005) is said to have trolled the premises a few times, but never when I visited. The catalogue claims that the figure’s invisibility is also its transgression. The show would have done well to make performance more visible in general (not just on the opening night), by providing a platform for something like Meese’s truly deranged Mutter Parzival project (Mother Parsifal, 2005) or by inviting John Bock to complement his irreverent filmed antics (shown in the
exhibition) with his play Zero Hero (2004) or, for that matter, by inviting any number of other artists to insert some much-needed havoc.

In the end, the perfect metaphor for the show – and perhaps a sly commentary on it – could be found in Christoph Büchel’s Minus (2002–5). The artist staged a rock concert in a container a week before the Pompidou opening and then froze the entire space – drum kit, alcohol-impregnated leftovers and all. The container was moved to the museum, where a stationed guard allowed you to walk in two at a time and see that the raucous bash had become a frosted object of aesthetic contemplation. Like the show, it left you cold.