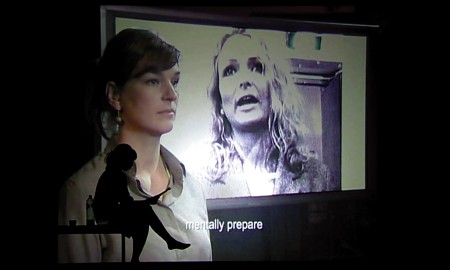 Curated by critic Claire Bishop and ICA director of exhibitions Mark Sladen, ‘Double Agent’ presented works that rely on other people for their execution. The show approached this much-discussed field of socially engaged practice with seven works both by some of its more prominent practitioners (such as the Polish artist Pawel Althamer and British artist Phil Collins) and some surprising, and welcome, choices – the Dutch artist Barbara Visser, for in-stance, and German artist Christoph Schlingensief, whose work is not well known in the UK. The form the works took also varied – from documentation

of the weekly pottery classes Althamer leads in Warsaw, to video and performance – and this breadth highlighted the persistent confusion in socially engaged work between ‘collaboration’ and ‘interactivity’. Though often billed as processes of displaced authorship, in that authorial control is passed onto the participants in the work (for example, in a performance or workshop) or onto the audience itself, this exhibition made clear the extent to which artists retain authority over the rules of engagement, and how they play out.

In quite surprising ways many of the works depicted power games – that is, the way in which a dynamic of ‘authorial control’ that might undergird the structure of a piece also becomes its symbolized theme or represented narrative. Artur Z˙mijewski’s controversial video Them (2007) documented an experiment he staged among different political and ethnic factions in Poland, in which he gave each group a canvas to decorate as a form of self-expression, then allowed them to amend – or desecrate, as the case might be – those of their rivals. Collins invited key art-world figures to be slapped for an edition of photographs (‘you’ll never work in this town again’, 2004–ongoing). Schlingensief’s installation African Twin Towers – Stairlift to Heaven (2007) consisted of a projection of segments from his unfinished road movie African Twin Towers. A stairlift transported viewers across the space of this projection, towards a box near the ceiling. After the viewer’s awkward journey upwards, he or she was able to peep into a private film screened in the box, which showed two of Schlingensief’s regular collaborators, biting each other’s hands and feeling each other's faces. Compounding the antagonism directed towards the viewer in this scenario – in which he or she sits in a device designed for the disabled, and moves at an excruciatingly slow pace across the images that everyone else is trying to watch – Stairlift to Heaven symbolized the power held by the creator of the installation in the knowledge at the top of the staircase: an exaggeration of Marcel Duchamp’s Etant donnés (1946–66), with an anticlimactically slapstick rather than erotic prize.

Visser’s video Last Lecture (2007) shows an actress pretending to be Visser talking about a video of an earlier lecture given by a different actress pretending to be the artist. The piece offered knowledge as a privately held prize, achieved through personal revelation rather than public accessibility. This problem of knowledge-as-power was also at play in the American artist Joe Scanlan’s untitled contribution, the studio of a fictional artist, Donelle Woolford, which he set up within the gallery space and without signalling Woolford’s fictional status. Woolford, who regularly ‘shows’ in New York and recently had reviews in Artforum and ArtReview, makes mediocre wooden assemblages inspired by Cubism; these are hung on the wall, amid her tools, materials and personal effects. If it is difficult to show what socially engaged work is, it is easy to say what it is not: a studio-based practice, inhabited by a single and solitary artist engaged in the problem of transforming physical material from one visual state to another. This stereotype of the artist – to which we could add white, middle-class, male – was undercut somewhat by Woolford’s identity: female, black, born in Georgia and living in Harlem. I don’t know how to read this racial overstatement, particularly when the inclusion of the studio practice is ambiguously framed: is it an elegy, or is it a celebration of what’s been left behind? And onto whom has Scanlan’s authorship been displaced: the actor who plays Woolford, the duped public who are taken in by the installation or the privileged audience who do ‘get’ the piece?

In a essay she wrote for Artforum in 2006, entitled ‘The Social Turn: Collaboration and Its Discontents’, Bishop discussed the double bind that criticism of this kind of work had run into: it either dismisses the work on aesthetic grounds or judges it on ethical ones, concentrating on the process of its execution rather than on what it creates. There are indeed other forms of analysis, but the power games the public is unwillingly engaged in force the issue of an ethical response – as does the disingenuous suggestion that the subjects of the works are collaborators. Collins, for his series of photographs, also slapped Bishop and Sladen, and sold the prints as limited editions during the show, thereby putting the curators in the position of themselves becoming the subject and commodity of a show they organised. (According to Bishop, during a talk she gave about ‘Double Agent’, neither she nor Sladen was aware of Collins’ intention.) How sorry you feel for the curators may depend on your opinion of the show, but the red traces on their cheeks bear witness to the miasma of power relations in the art world, where a slap in the face can be a badge of honour. Such willing subjection to a form of physical authority does not constitute collaboration – in the way the music, film or dance worlds understand it – but an ethically ambivalent model of working that touches on the various (emotional, professional) reasons for action (trust, power, betrayal, partnership) bound up in the term ‘the social’.