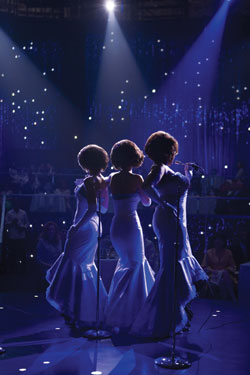 Beyoncé Knowles – what makes her so great? It’s the way her voice – its ethereal elasticity may be unequalled since Michael Jackson’s – punctuates the air with the rhythmic eloquence of a flock of starlings. She is a singer-songwriter, musician and co-producer, possibly at her best when it comes to vocal arrangements with surprising contrasts. A case in point: listen to a track like ‘Freakum Dress’ on her latest album, B-Day. (‘Come on, you phoney, you just gloss over the fact that you’re into her looks, Bootylicious and all – the truth is, you-like-to-watch-her-but-you-can’t-touch-her…’.)

Why should these qualities be seen as contradictory? Why shouldn’t it be part of the desire invested in pop that the idol is sexy and a great musician, or rather, that virtuosity and intelligence are part and parcel of real sexiness? And, of course, no touching. It’s more about the bodily presence of a voice. Recently I went with my partner, who has been a George Michael fan since her early teens, to a concert of his, and when he took the stage, instantly, tears were pouring from her eyes – simply because he was physically in the same (albeit very big) room as her. But that affection wouldn’t have been sustained for such a long time had it not been for a handful of great songs, such as ‘Young Guns (Go for It)’ (1982) or ‘Jesus to a Child’ (1996).

The same could be said for Beyoncé, and that is one of the main problems with the film Dreamgirls (2006), modelled on the story of Diana Ross and The Supremes, in which she stars in the role of Deena, lead singer of The Dreams. The songs are all second-rate, if not downright crap: soul watered down to Andrew Lloyd Webber-type wailing and pining, sung to off-the-shelf MOR session routines. On top of that, Deena is characterized as a slim singing doll, played off against the voluptuous Effie (portrayed by American Idol star Jennifer Hudson), who has a more powerful voice but is kicked out of the band for being overweight and unruly. Why, rather than portraying Deena as repressed, with a constant rabbit-caught-in-the-headlights expression, couldn’t the film have acknowledged, as Ann Powers observed in the L.A. Times, the more ‘complicated figure’ that Diana Ross really is, and thus really pitched ‘two versions of ambition and two versions of artistry’ against each other, rather than prolonging the cliché of ‘top-of-the-lungs gospel soul versus meek commercial pop’?

Now I understand why Beyoncé recorded her critically under-acclaimed album B-Day in just two weeks after shooting the film, and then brought it out well before the movie’s release on the pretext that it was supposed to come out on her ‘b-day’ – or birthday, on 4 September. The title is oddly self-congratulatory (and, it must be said, also sounds like a bathroom appliance), but perhaps the allusion to ‘D-Day’ wasn’t unintended: not because the Dreamgirls score and script warrant a secret Normandy operation, but because the stereotypes reinforced in the film do justify some anger. In fact, as Daphne A. Brooks put it in her B-Day eulogy in The Nation, the album does project Beyoncé as a ‘startlingly abrasive persona’, a character of ‘spiritual discontent, romantic pessimism and self-control’. However, Beyoncé is also a diplomat. There is a spoken-word interlude on her record in which she explains how it came about ‘effortlessly’ after finishing the film, ‘because I was so inspired by Deena, I wrote songs that were saying all the things I wish she would’ve said in the film’. A little voice inside my head translates this as: ‘The behaviour assigned to Deena pissed me off so much that I had to set the record straight immediately.’ Exactly.