For Each Gesture Another Character

K
BY Krzysztof Kościuczuk in Reviews | 01 MAY 14 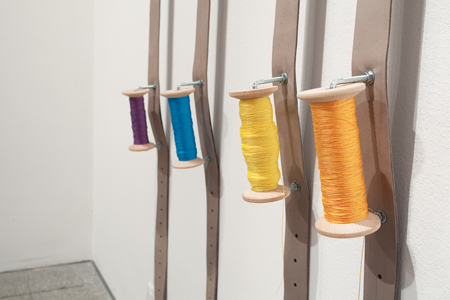 ‘The work is the death mask of its conception,’ wrote Walter Benjamin in his 1928 essay ‘One-Way Street’. It might be one of the few instances when he was mistaken. A walk through ‘For Each Gesture Another Character’, curated by Kasia Redzisz, proves this point. Featuring work by 18 artists (and a performance programme including five more) the exhibition explores the elusive boundaries between the body, gestures and drawing, capturing that which so often, it seems, is lost between the human body and the act of mark-making.

The first section, ‘Drawing as Act’, is austere and oddly muted. Jarosław Kozłowski’s Drawing Fact XXIV (1979), a large sheet of graphite-covered paper framed under glass like a sinister black mirror that simultaneously sucks in and reflects the visitor, complements a piece from Tony Orrico’s ‘Penwald’ series (2009–ongoing). The latter is the outcome of an extensive three-day performance, during which Orrico drew repetitively on the gallery wall. The three figures the artist sketched resemble the twinned lobes of the brain, which seems fitting given Kozłowski’s description of drawing as ‘being close to thinking’. The only thing disrupting this black and white equilibrium is a tangle of multi-coloured threads sprawling across the floor and leading upstairs – part of Mirosław Bałka’s Pisza¸c ciało / Writing the body / Körper schreiben (2013–14). During the opening, Bałka invited visitors to wear leather belts with rolls of thread attached to them, which unwound as they made their way through the exhibition, tracing their steps through the gallery spaces.

The second section of the show, titled ‘Gestures and Lines in Space’, opens with Untitled (Intervention) (1992), a small photograph of an exhibition by Edward Krasinski, showing a gallery interior with the artist’s hallmark blue Scotch tape stuck on a blank canvas propped on an easel. The line continues across the room, this time seemingly carelessly drawn by Krasinski directly on the photographic paper in felt-tip pen, mimicking the way the artist originally deployed his tape: ‘Width 19mm, length unknown. I stick it horizontally on everything and everywhere, at a height of 130cm.’ Krasinski’s use of Scotch tape was deliberate, precise and calculated, providing a strong backdrop to a number of other works in the show that explore ideas of chance and circumstance.

William Anastasi’s ‘Pocket Drawings’ series (1968), for instance, are scribbles that resulted from the artist holding a pen against a folded piece of paper whilst walking. In Carol Rama’s Bomb (1968), a dark ink blot, shaped like a porous mushroom cloud, is likewise a product of chance, as is Tim Knowles’s MK3 Postal Drawing Fed Ex-8666 1735 3514, 11.11.2008 (2008), in which an automated drawing device recorded the bumps and jostling that took place during its shipment from the UK to Poland. For Attention!... Painting (1957) (a film believed to be missing for more than three decades until its rediscovery in 2010), Tadeusz Kantor stages a mesmerizing re-enactment of the making of an Informel composition for the camera. This tension between the deliberate and the accidental is perhaps best encapsulated, however, in Pierre Bismuth’s Following the Right Hand of Sigmund Freud (2009). Using found footage shot in Vienna in 1931, Bismuth traced the movement of Freud’s hand in the film, plotting doodle-like shapes. Bismuth’s resulting automatic drawings, made as though on behalf of Freud, form an undeniably amusing and slightly satirical commentary on the neighbouring works.

In the final section, ‘Drawing the Bodies’, a set of fairly traditional pencil and ink drawings of female nudes from the 1950s and ’60s by Jerzy Nowosielski is accompanied by Nude (1933), by the author and artist Bruno Schulz, whose writings and drawings are replete with images of fetishized women. Kantor’s People Dummies – Theatre Informel (1961) seems similarly to objectify the human body, with figures turned into theatrical props in the service of the artist’s overarching vision. This totalizing male gaze is thankfully countered by a selection of works by female artists. Across the room, a set of eight photographs by Dóra Maurer, Objectified Outlines (1981), also focuses on the human figure; this time, however, it is the artist herself who wittingly accepts the regular geometric pattern that is painted on her body. Shown on an adjacent wall is Hands (1974–75) by Polish printmaker Halina Chrostowska. Executed in pencil and watercolour, the cycle is a powerful testimony to the progressive nerve damage that resulted from the artist’s exposure to nitric acid vapours, which left her temporarily incapacitated and unable to work on her etchings. This perspective on the practice of drawing in the wake of illness is echoed in Accident (1994) by Romanian artist Geta Bratescu – four sketches of the artist’s left hand, which she made during her recovery in hospital, in order not to fall out of practice.

These two countering approaches – traditional nude figure drawing and a more self-aware approach to the body – are explicitly brought together in Kate Davis’s series ‘Disgrace’ (2009). In a video and four drawings, the artist traces the outlines of her own body over reproductions of Amadeo Modigliani’s female nudes. The two blend together into a fascinatingly disturbing whole. It is here, more than anywhere else in the exhibition, that we are confronted by the fine line between gesture and drawing, capturing that elusive space that opens the moment before a work becomes its own death mask.