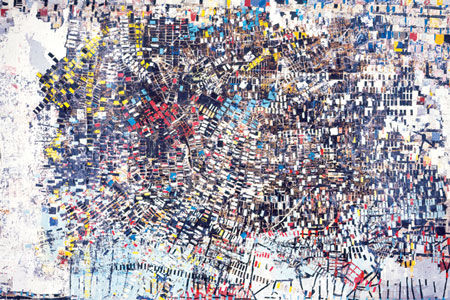 The City of Angels sits at the centre of a galaxy of sprawl radiating outwards from the desert to the sea. A multi-ethnic city-state encompassing a mess of contradictions, home to everything from the depressed housing projects of Watts to the ‘Happiest Place on Earth’: Disneyland. Its inhabitants somehow thrive in a desert that straddles lively tectonic plates, dodging forest fires, mudslides and paparazzi, and spend an inordinate amount of their time inside cars. These extremes fuel the lives and imaginations of all who call this place home, a reality that extends to much of the work in this well-crafted show of 15 artists who not only happen to reside in Los Angeles but who also make art that actually reflects the myriad of possibilities that exist in the Southland. Organized by Gary Garrels, ‘Eden’s Edge’ seemed to suggest that, whether by flying their freak flag or following their bliss, many artists here are breathing new life into old modes, countering expectations of media and meanings, turning corny into cool, ugly into alluring, and making the worn-out somehow productive.

An amazing characteristic of Lari Pittman’s work is that many of the graphic elements he employs should not logically succeed in each other’s company, but somehow he pulls together conflicting spaces, disparate parts and suggestions of buried narratives that end up getting cosy. Our gaze loops around the canvas like a roller-coaster, picking out the strangest things: hokey scarecrow stick figures, bodies plummeting earthward, nautical motifs, still lifes becoming landscapes. Where Pittman has the confidence to tackle ‘ugly’ palettes and make them sing, Ken Price takes beautiful colours and peppers them on lascivious blobs. Price eschews traditional ceramic methods, using paint instead of glazing techniques to build up the multiple layers of pigment that peel away like the prettiest snakeskins stretched over organic concretions. They can be appreciated for their sensuous whimsy, with plenty of dazzling orifices all tarted up – but they are more sexy than sexual. In these sculptures one can detect every surfboard, custom hot rod or wannabe starlet that has ever cruised the coastal boulevards looking for a good time.

Sybaritic vibes pop up in other works; in Matt Greene’s paintings we find tiny nude figures lounging among giant mushrooms in abstract forested voids of black and white. Like a Hieronymus Bosch without the judgement, the wee revellers tune in to turn out, their tiny legs splayed in quiet, orgiastic glee. While these works do not resemble the LA of everyday experience, they do reflect the ongoing mythology surrounding all the Lotus Eaters who have occupied a niche in La-La-Land. Liz Craft adds to this with two bronze icons of the 1960s – the hippie and the biker. Ballad of the Hippie (2005) shows a stoner troubadour strumming a guitar, tawny smoke rising from his pipe and a real peacock feather jutting from the sound-hole. But just as every high is followed by a low, so Craft balances the karmic load with a bronze skeleton biker in Death Rider (Virgo) (2002). Patinated black as night, the bones and chopper are all built of tree branches (including a nifty pine-cone petrol tank). It is a vision of Mother Nature coming back as a Hell’s Angel to drive figures of eight all over our graves.

‘Nature gone wild’ describes the paintings of Sharon Ellis, which were marked by searing colour and a garish beauty that owe a little to the smog-induced Technicolor skies Angelenos view regularly. Pushed towards a harder graphic edge, these vistas resonate with eye-popping clarity as trees are back-lit by heavens filled with stars or clouds of flame that make Frederic Church’s Romantic twilight skies seem tame. In a quieter register are Rebecca Morales’ enchanting depictions of botanical subjects, with braids of hair and tea cosies coming alive among the flora. They have Albrecht Dürer’s Old World touch with their delicate strokes on irregular sheets of calf vellum, and there is a charming oddness to these fecund fantasies. Away from these pastoral leanings, Mark Bradford’s large collages reclaim the colour and texture of the city. Bradford pushes through his materials, making images that are as much about erasure as they are about what remains. With the texture of abandoned buildings they suggest aerial views of the urban grid, spreading out to make sprawl look beautiful and detritus useful. If real angels ever cared to visit their town, this confused almost-Eden, they’d catch glimpses of all of these vistas filtered through the hazy light as the sun plunges into the Pacific or behind a studio back lot. Either way is cool with Angelenos, who are used to that golden hour when everything looks just fine.