On the Edgware Road 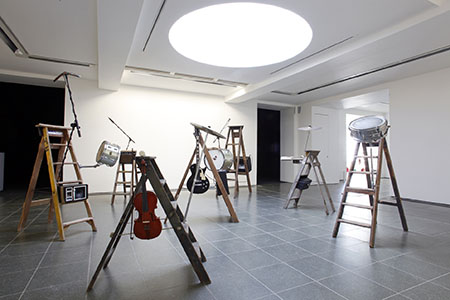 ‘On the Edgware Road’ was the gallery manifestation of The Edgware Road Project (a.k.a. The Centre for Possible Studies), an ongoing research and residency programme. Initiated in 2009 by the Serpentine Gallery’s former Head of Programmes, Sally Tallant, with Janna Graham and Amal Khalaf, among many others, the project developed out of the four-year collaboration ‘Dis-assembly’ (2002–06), which was run between the Serpentine and a fading community school near the Edgware Road area that lies to the north of Hyde Park.

The current project was inspired by Tallant’s desire to engage with a specific location for a longer period than is typically allowed for by a conventional exhibition or public programme. The choice of the Edgware Road – which simultaneously connects and divides the centre of London to the western and northern parts of the city – had to do with both its rich cultural heritage and with the organization’s connections to the area. Renowned for its diverse immigrant community, the road has for some time been a home to many Lebanese, Egyptian, Iraqi and Qatari migrants. As the area is sometimes dubbed Little Cairo or Downtown Beirut, it was appropriate that two of the initiative’s major curatorial partners were the Townhouse Gallery in Cairo and Ashkal Alwan, led by Christine Tohme, in Beirut. Tohme’s role was especially significant as her ‘Hamra Street Project’, launched in 2000, was one of the key models for this venture.

The relationship between urban concerns and collective participation is very much the curatorial impetus that binds the various artist residents and collectives who have come to work with the itinerant Centre for Possible Studies. The Mumbai-based collective CAMP, for example, studied the historical and cultural movements throughout the Edgware Road area. One of their findings was an undocumented history of cult cinema: the group untangled an account of an eccentric and entrepreneurial resident who launched an Arabic cinema and VHS distribution label, only for it to inexplicably vanish. Their collected materials continue to grow on their website, edgwareroad.org.

Egyptian artist Susan Hefuna, on the other hand, worked with school groups at Westminster Academy and tentmakers in Egypt for a project which culminated in a two-day event at Speakers’ Corner in Hyde Park. Elsewhere, London-based collective no.w.here initiated the Free Cinema School, producing collaborative filmmaking projects, in partnership with guests including actor Khalid Abdalla, experimental filmmakers Nicky Hamlyn and Sarah Pucill, as well as x-talk (a support/study group for prostitutes), along with various public participants.

These examples are suggestive of the broad disparities between the various approaches. Their binding quality, nevertheless, is not a desire to produce a definitive cultural product, but rather to foster a form of collective engagement that unifies Edgware Road, and which reflects on its complex history amidst the fluctuating urban shifts that it has endured. As such, ‘On the Edgware Road’, the exhibition that collated these various ‘acts’, often felt like an odd collection of fragmentary narratives, each with such a weighted trajectory and surrounding discourse that it was difficult to consume when removed from its original context. Why was there a need to transform this iterative process into an exhibition? Perhaps this was an allusion to the fact that much of the project’s audience consisted of a small group of self-subscribing individuals, and ‘On the Edgware Road’ was an attempt to broaden that scope.

Nevertheless, the majority of the works bristled with such urgency that this fact could be overlooked. At the Serpentine Gallery itself, Hiwa K presented Chicago Boys: while we were singing, they were dreaming … (2010–ongoing), instruments from a cover band who also meet as a neo-liberalism study group, and who perform pop songs from Iran, Iraq, Lebanon, Bangladesh and Afghanistan in front of YouTube clips of the original acts. During the residency, Hiwa K’s tongue-in-cheek collective performed at cafes along the Edgware Road, before touring Europe; the artist describes the formation as having grown out of conversations with neighbouring café owners. In the central space, Rania Stephan presented her mesmeric feature film, The Three Disappearances of Soad Hosni (2011), an evocative poem to one of the icons of Egyptian cinema, who tragically died on the Edgware Road during the early millennium under mysterious circumstances.

It is this mix of wistful melancholia and active participation that propelled the projects within ‘On the Edgware Road’ from being merely exploratory, allowing audiences multiple entry points into an area that has long been identifiable as an emblematic microcosm of global culture.