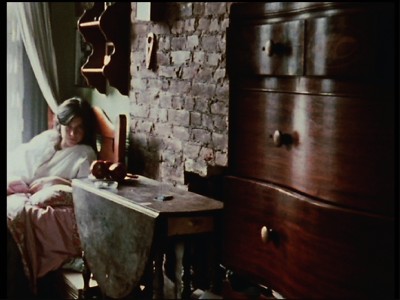 The first room of the exhibition ‘Ellipsis’, curated by Lynne Cooke, provided the underwhelming overture to an otherwise compelling assembly. A single photograph from Francesca Woodman’s ‘Angel’ series (1977) hung in wan solitude, while eight projectors beamed slides from Lili Dujourie’s ‘Oostende’ series (Ostend, 1974) on adjoining walls. Spareness and solitude are, by and large, the bread and butter of these artists’ respective aesthetics. But that condition – by turns formal and existential – need not bear on their works’ hanging per se. Luckily the rest of the exhibition mixed up its display somewhat, asserting the presence and momentum of each artist’s contribution, while raising due questions about their contiguity. As its title obliquely conceded, ‘Ellipsis’ was by no means exhaustive in scope: three videos by filmmaker Chantal Akerman, 30 photographs by Woodman and a series of photographs, slides and videos by Dujorie. Even in its omissions the exhibition argued for a common interest among these artists, whose formal preoccupations notably overlapped during the 1970s: that of the female body, most frequently the artist’s own, as captured on film – whether cinematically or photographically, whether as formal raw material or as the vehicle for more discursive ends. But that shared affinity notwithstanding, the framework holding these images together buckled somewhat under the specific gravity of each artist’s contribution. That buckling provided the exhibition’s unintentional poignancy, in that the disparities between the works on view exceeded any facile common denominator.

From her earliest extant print, Self-portrait at Thirteen (1972), to the last pictures before her suicide in 1981 at the age of 22, Francesca Woodman produced a body of work that is, unremittingly, a work of her body: veiled, cropped, propped or seized in a blur of haunting disintegration. Then at one point I did not need to translate the notes; they went directly to my hands (1976) depicts a woman (presumably Woodman) prostrate before a grimy, peeling wall; a large piece of thick, frayed paper curls to conceal her undressed genuflection. This image typifies Woodman’s alchemy of formal fastidiousness and lyrical, literary allusion. Similarly derelict spaces form the scenes of Lili Dujorie’s numerous videos (14 of them on view here), and her photographs reveal an equally brilliant sense of framing, even if Dujorie deploys the body in explorations of seriality and duration that differ, ultimately, from Woodman’s. Dujorie’s experiments in video and photography form a likely bridge between Woodman’s corpus and the work of Chantal Akerman, whose video Mirror (1971/2007) was on view in an adjoining room. Here a naked young woman stares at her reflection in a full-length wardrobe mirror, offering intermittent commentary on different aspects of her appearance – ‘I am pale’ or ‘I have fragile wrists’. The camera reveals the woman’s body from behind, as well as her reflection, its oblique angle affording a double voyeurism undermined by her awkward, self-conscious shifting and cavilling.

In her notes to the show Cooke invokes Michelangelo Antonioni as the ‘elliptical’ lens through which we might view these artists’ works, both singly and collectively. Antonioni’s incessant framing of a melancholic Monica Vitti in desolate spaces, and his projections of subjectivity onto – and as – architectonic solitude perhaps court such an association with the imagery on view. But, formal resonances aside, I couldn’t help but recoil at such an invitation, particularly to the extent (however debatable) that the oeuvres of Woodman, Akerman and Dujorie have been respectively claimed as feminist avant la lettre. Antonioni ventriloquized his own subjectivity through his female leads, often evacuating their interior life in the process. If the exhibition of these three artists’ work demonstrated anything, it is the first-person intensity with which women photographers and filmmakers came to stage and frame their own bodies in the 1970s – integrally or elliptically, earnestly or ironically, in front of the camera or behind it. Importantly, all three artists obviate such distinctions in their works. But it is the differences between them – the ways in which their works do not necessarily overlap socially, politically or intellectually, even if they did so historically or formally – that attest to the irreducible quiddity and nuance of each.