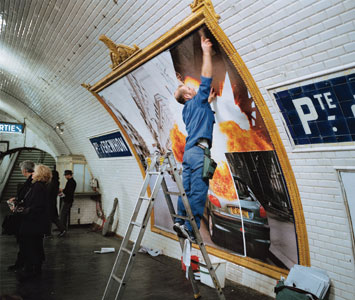 ‘Circumambulation’, Eric Baudelaire’s aptly titled début New York solo show, deliberately courted the circuitous and the vague. The title derives from a two-channel video piece from 2006, not exhibited here, in which two hand-held cameras circle Ground Zero, one pointed towards the ground and one towards the sky. The events of 9/11 were also the implicit reference behind the works here, although one wouldn’t necessarily have known it without a little investigation. Such digging around proved rewarding, however, and what emerged on careful viewing was an effective disquisition on the impossibility of representing such an event, however strong the desire to do so.

The centrepiece of the exhibition was a film entitled Sugar Water (2006), a reference to Henri Bergson’s description of duration as an invisible process, like sugar dissolving in a glass of water. The work is set on the platform of a fictional Parisian metro station called Porte d’Erewhon, which is itself a literary reference, an anagram of ‘nowhere’, borrowed from the title of Samuel Butler’s eponymous Utopian 19th-century novel. As the film opens, a billposter descends the metro stairs, approaches a large billboard painted bright blue and begins pasting up an image of a generic car located in an anonymous Parisian suburb. After finishing, he begins again, laboriously covering the image with another of the same car bursting cinematically into flames. This is followed by an image of the car engulfed in smoke and, next, another of its burnt-out skeleton. Finally the billposter papers the entire surface its original bright blue, stands back, surveys his work and leaves. All the while, metro riders enter and exit the scene seemingly oblivious to the slow-motion narrative action taking place.

In a text accompanying the show French critic Pierre Zaoui discussed the film as a commentary on the banality of images that circulate in contemporary society with such rapidity that we become numb to their inevitably hackneyed messages. One stock image succeeds another, as though in pursuit of the single decisive moment that might accurately encompass events that by their nature elude any determinate frame. Merely implicit in the film, this failure is, according to Zaoui, the manifest subject of a series of photographs from 2007 also on view. Here images of Parisian façades that are somehow cut off or suspended in space are placed behind Perspex spray-painted with graffiti phrases referencing a certain seminal event: ‘I hate Ground Zero’, ‘I need Ground Zero’, ‘I claim Ground Zero’, they read. The obvious question is what these phases have to do with the 19th-century Parisian buildings. The answer, it seems, is nothing tangible. It is as though in attempting to possess an event – to make our mark on it or declare ourselves its witness – we inevitably lose it. The present opens onto a silent and irretrievable past. In these photographs reflections on Ground Zero are imprinted on historical edifices that themselves embody loss and absence, anonymous backgrounds to a host of equally traumatic historical associations: revolutions, street fighting, barricades, the drama of urban upheaval. Baudelaire’s phrases float above the photographs unmoored. (Not insignificantly, they are inspired by the artist’s seeing the words ‘I Hate Ground Zero’ on a building at the Lyon Biennial.) They are rootless, migratory, indicative of the impropriety of their author’s very effort at achieving meaning. In this way they shift the focus from the specificity of the subject at hand to the universality of the expressive gesture.

Which brings us back to Baudelaire’s film, where what impresses is the concentration on the Sisyphean labour involved. Baudelaire’s patient billposter is the only authentic element in the film. He is played by a real sign poster, whereas the other characters are all actors, the car bombing is staged and the metro platform a defunct station now used for film shoots. This becomes clear on sustained viewing, as what initially appears digitally manipulated reveals itself to be the complex, old-fashioned process of wetting, folding, unfolding and pasting that is the sign-poster’s art. It is this process that takes up time (the film is approximately 70 minutes long) and that holds our attention even as we wait for the moment when each image will be revealed. In other words, the banal succession of images of which Zaoui writes is set against the painstaking effort at constructing these images (as well as their own obliteration or replacement), fragmentary and clichéd as they may be. Pasted and re-pasted, these images may be artificial, unsatisfactory and, like Baudelaire’s graffiti phrases, interchangeable, but they are applied nonetheless with dedication. In this way, and through his indirect method, Baudelaire acknowledges both the difficulty of making reality speak and the need to try.