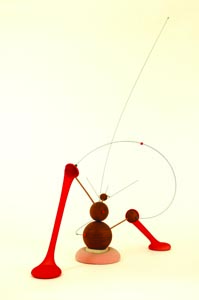 There is a long history of artists’ collaborations. In recent years, though, the majority of these have been a complex and divided process, often inspired by the modus operandi of cinema, theatre or activist collectives. It is rare to see two artists with distinct oeuvres, techniques and visual languages working together in a hands-on way on a single piece or a body of work that melds their artistic visions or creates a dialogue. One great and memorable example was Michel Majerus and Hans-Jörg Mayer’s series of paintings from 2002, a suite of large-scale canvases executed with four hands. On learning that the exhibition ‘O Abraço do Tempo … Jazz’ (Time’s Embrace … Jazz) would represent a collaboration between the two Rio de Janeiro artists Ernesto Neto and Carlos Bevilacqua, one was immediately curious as to how Neto’s space-filling bulbous and biomorphic lycra sculptures could go together with Bevilacqua’s delicate and diminutive assemblages of wire, metal springs, glass beads, wooden rods and various kinds of modest materials. Having seen Neto’s baroquely expansive installation Léviathan Thot inside the cavernous space of the Panthéon in Paris in 2006, the idea of a collaboration with another artist working on an entirely different order of magnitude on a series of handmade miniature sculptures seemed surprising.

The installation at Fortes Vilaça presented a large number of sculptural constructions. Wooden stitching frames (or sections of them), pearls, wire, stockings and stuffings of plastic beads were the principal elements of these intimately scaled objects, sitting on the floor, hanging from walls or suspended from the ceiling. At first glance one could guess how these works had come about: circular and spherical wooden structures suggested by Bevilacqua and colourful polyamide stockings stretched over them by Neto, creating bodies, volumes and three-dimensionality. Wandering through the ensemble of weird objects with their air of obscure semi-functionality, one was occasionally reminded of Leonardo da Vinci’s apparatus drawings, scientific experiments in progress or strange inventions left half-completed. What at first appeared to be a simple application of one material to another became quite a complex exploration of such properties as tension, gravity, materiality, strength, balance and resistance. It was exactly the intimate scale of the individual objects that conveyed to the viewer a sense of joyfulness in their making; this was a dialogue between two artists expressed as a visible playfulness. One doesn’t often talk about fun in such contexts, but it was obvious that fun was an undeniable element in the working process.

To be sure, these sculptures are much more interesting in a group than as individual pieces. In the installation they seem to create a very unique universe of interrelations. Despite their compositional beauty and precision, they appear to be temporarily put together, as if transported directly from the artists’ studios during the latest round of experimentation on material stresses, balance and form. The word ‘Jazz’ in the exhibition’s title comes in handy, as it suggests improvisation; a process of joint creation. The objects seem to be able to speak about some of the key questions of artistic production – they celebrate the artist as an investigator, an inventor and a player, as one who simply does not take physical conditions, or indeed any conditions, as a given. They celebrate intimacy and smallness, fragility and vulnerability. And here lie the deeper quality and the cheerful impulse of this exhibition. It is the ease of two artists, both with a very elaborated personal repertory of visual strategies, presenting a series of jointly developed objects that tells so much about artistic practice and the vulnerability of art as well as the limitations and potential of collaborative creation.