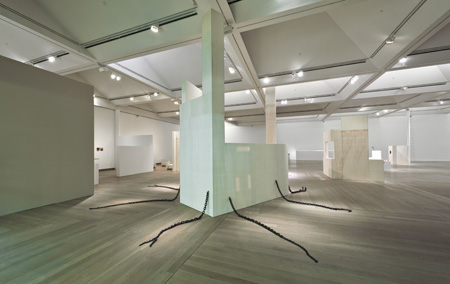 The first exhibition at Moderna Museet to open under the new directorship of Daniel Birnbaum is a retrospective of Swedish artist Eva Löfdahl, who since her debut in 1977 has become one of Sweden’s most prolific and challenging artists. Curated by Ann-Sofi Noring, the exhibition, titled ‘The Whirling Box or from Foot to Toe’, is meant to be experienced as a massive, interactive installation. Its focal point is a large white wooden box out of which extend several lengths of thick chain – a not-so-subtle comment on the constraints of the white cube and the art institution. As part of the installation, low walls divide the museum’s atrium into scattered sections, as do geometric shapes made of unfinished wood that extend nearly to the ceiling. These shapes and partitions work in tandem with dim lighting to give the room a quiet, otherworldly feel. Nestled among them are a variety of works spanning the artist’s 34-year career, including sculpture, drawings, paintings and objects.

The show’s emphasis is clearly on Löfdahl’s minimal sculptures, which can be alternately playful – such as Utan titel (Untitled, 1989), three cauliflowers cast in dental plaster on a table – and highly formal, presenting a careful exploration of the relationship between space and object. Architectural details like building modules, chain-link fence, coiled metal and antennae crop up frequently throughout the installation as well as in Löfdahl’s sculptural work. One detail of ‘The Whirling Box or from Foot to Toe’ is an L-shaped white wall that juts out at hip-level from the rear wall of the exhibition. Its top is lined with the sort of thin metal spikes used to deter pigeons from roosting on city rooftops.

Physical elements of biology and astronomy are also frequent references for Löfdahl. Korallöar till 30-åriga kriget (Coral Islands for the Thirty Years’ War, 1993), for instance, is a series of four low, white platforms, on top of which sit white plaster helmets. Clinical specimens like these seem to belong on the laboratory table, and invite a sort of imaginative pondering not generally common to Minimalist art. Other works are more overtly political, like the numerous ‘Modeller’ (Models) from the early to mid-1990s that allude to Swedish political discourse directed at creating a workable model for a democratic socialist state. One of the various models, Modell F (1993), is a wall-mounted glass bottle that has been broken and carefully reassembled. Through its mouth is balanced a metal rod with matching white spheres on each end. The artist has described the work as ‘an equation in which one term is left “hanging in the air” while the other one is surrounded by action’ – an apt metaphor for Sweden’s ambivalence toward remaining a welfare state.

What emerges through this retrospective is a body of work that is consumed with exploring the properties of objects as much as relationships between light and darkness, floor and ceiling, static and dynamic. Even the seemingly incongruous early paintings on cardboard – from the period in the early ’80s when the artist was part of the punk rock-inspired performance collective Wallda – or her three-dimensional splatter paintings (Utan titel, Untitled, 1988), add to the viewer’s awareness that Löfdahl is able to transmute her interests to nearly any medium.