The Feminist Future: Theory and Practice in the Visual Arts 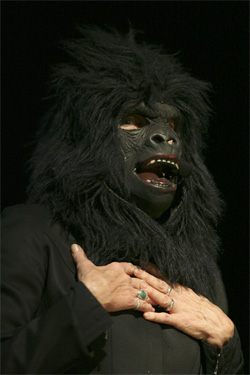 What is Feminism’s fate in the art world? Whatever the answer, MoMA’s two-day symposium opened with an air of festivity. After receiving a standing ovation, the keynote speaker, veteran critic and curator Lucy Lippard, recalled her own activist history and that of others, proclaiming, ‘We’ll be post-feminists when our goals have been met, and not before.’ The audience contained many older women, but the museum had provided scholarships for selected students to attend, and over the course of the symposium some fresh issues emerged through their questions. (The discussions were broadcast live on P.S.1’s radio station, and video documentation will be archived on the web.)

The topic proved an elusive one. For the panel ‘Activism/Race/Geopolitics’ Coco Fusco staged a performance that bluntly invoked the spectre of female sexuality used to promote torture and war, while those ‘feminist masked avengers’ the Guerrilla Girls landed well-placed jabs at art institutions but otherwise described strategies that seem dated. That panel’s highlight was Carrie Lambert-Beatty’s paper on the Dutch group Women on Waves, which works within international maritime law to provide abortions and contraception to women denied access to such services, via a ship bearing a clinic/container designed by Joep van Lieshout. Lambert-Beatty offered a vision of a performative feminist art practice capable of enacting concrete change by tactically navigating between art and activism but also noted its ‘flip side’: a ‘rhyming’ with neo-liberalism and globalization. ‘Fictions can be facts of another order’, she asserted. On the same panel Richard Meyer observed that Feminism had taught him to consider the overlooked and neglected; he suggested that rediscovering work by artists such as Joan Semmel and Anita Steckel, as well as counter-narratives such as the male-founded early 1970s’ ‘revolutionary effeminism’ movement, can facilitate future change.

For ‘Body/Sexuality/Identity’, Beatriz Colomina explored Le Corbusier’s bizarre defacement of the Eileen Gray-designed villa E.1027, and Geeta Kapur addressed the ‘reconstruction of identity through the attenuation of identity’ in the work of Bombay artists Rumana Hussain and Navjot Altaf. Marina Abramovic’s talk on her ‘Balkan Erotic Epic’ series was fascinating, but there seemed to be a conflict when she denied being a ‘feminist artist’ while mocking the male audio-visual personnel. The second day opened on a high note with Anne M. Wagner’s probing keynote in which she described works by artists ranging from Henry Moore to Yto Barrada as feminist, concluding, ‘the feminist imagination assumes many faces’, and worried about injustices that women face outside academia (her response to another talk’s gauzy optimism: ‘Nancy Pelosi as Speaker is not a sufficient solution’). For ‘Writing the History of Feminism’, David Joselit analysed works by Hannah Wilke and the Bernadette Corporation to argue that images are trans-gendered.

Despite such intriguing positions, issues that dogged Feminism in past decades remained vexing. ‘I feel like I’m gate-crashing a reunion’, admitted Wangechi Mutu before delivering a presentation on her work for the panel ‘Institutionalization of Feminism’, which concluded with a list of other women of colour who might have been invited. (Organizer Deborah Wye noted that one of the artists mentioned by Mutu was invited but unable to attend.) The implications of this bastion of Modernism playing host to such an event did not go unremarked. Helen Molesworth imagined works by Joan Snyder, Dana Schutz, Amy Sillman and Cindy Sherman hung together within its walls.

Although generational and other differences threatened to end the day on an anxious note, Linda Nochlin’s response was bracingly unsentimental and lucid – coming on the heels of Ingrid Sischy’s analogy between Feminism and the ‘safe space’ of Yayoi Kusama’s mental institution – and ended the symposium with a burst of hilarity and passionate critical engagement. She described a girlhood in which she poked out Tinkerbell’s eyes in a volume of Peter Pan and ‘hoped it hurt’. She dubbed herself ‘not a perfect feminist, but a good enough feminist’ and pulled no punches on the persistent dangers of essentialism: paraphrasing Milton, she said women should be ‘sufficient to stand though free to fall’. Such directness felt absolutely necessary. Perhaps it’s time for the masks to come off.