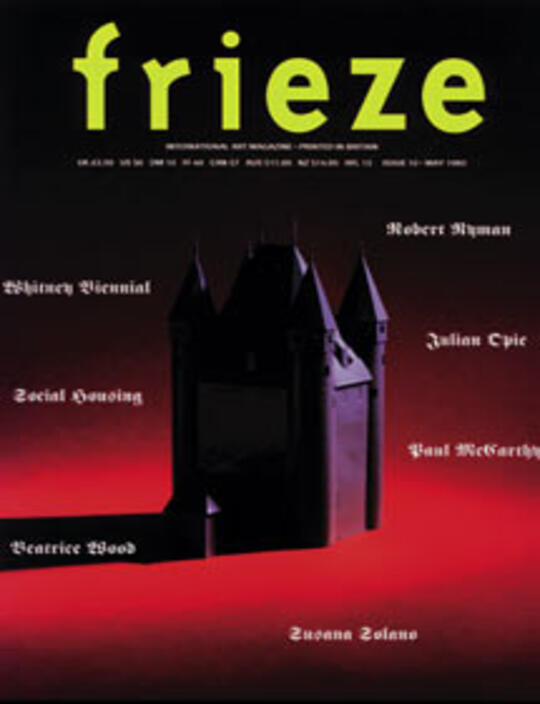 Entering a two-room ground-floor gallery in a street of terraced houses, the viewer is confronted by a projected image of Leonardo's Last Supper, bleached by the whiteness of the wall and fading out at the edges. Christ is seen in demure rather than convivial mode, gazing vaguely to the left as He performs the benediction. The effect is a little like fresco. Above this, attached to the wall with Sellotape, is a Polaroid photograph of a light, blinding the camera. Turning to move into the second room, the visitor sees a small notice painted in the manner of a National Gallery label. 'His manner of entertaining us...' it reads, 'consisted in sitting beside us, smiling upon us, looking at his wrist watch and in rolling cigarettes, at which he was an expert.' The tone hints at chance missed, perhaps by the guests, perhaps by the host himself. Inside the second room is a plinth with notes and a window, outside which, in the yard, glass plates lean, one atop the other. Over the word PORTNOY a quotation from Philip Roth's Portnoy's Complaint is inscribed: 'NOW YOU KNOW THE WORST THING I HAVE EVER DONE. I FUCKED MY OWN FAMILY'S DINNER', referring to a point in the novel where the young Portnoy takes liver from the refrigerator, masturbates into it, puts it back then finds it cooked for breakfast next day. Turning to leave, the visitor is confronted by a torch, sunk halfway into the wall and pointing slightly upwards, the light hugging the wall in a line, then ending in a half beam, as if indicating the absence of everything but this particular ninety degrees.

The statement, densely but elegantly written, acknowledges the 'manner of entertaining us' quotation - from Hermann Hesse's Steppenwolf - and casts doubt on whether the maker of the installation is or is not an artist, for his art (or perhaps the house itself) is referred to as a 'mode of retreat'. He offers 'a series of effects, uncertainly present, underachieved, irresolutely plastic', work as 'semi-detached' as the building that houses it. The 'gallery-note' ends: 'Extending the peripheral to mask regulated space... would draw out a third plane at the point of their articulation (at the point of their mutual dependence) within which the artist might be detained.'

But surely 'detain' is what the artist was doing to the viewer ('His manner of entertaining us' as the mock gallery notice said, was by stylised bathos, gestures which added up to nothing. What were they expecting? Enlightenment? Light dazzles after all, charisma is not a portable deckchair, spirituality cannot be snapped by a Leica. Entertainment? Anticlimax, rather. Nagging away throughout is the idea that the social gesture of arriving at a strange house to be 'entertained', then departing as a disbeliever might, like Judas from the supper table, might be inevitable despite protocol (like never admitting to not understanding something, as the disciples do not understand Christ's explanation of the future)and that the artist's only recourse is to admit that, even flaunt it. This is the way of the dandy. (As Gilbert & George said, 'All my life I give you nothing, and still you ask for more.') So is the problem of attention and distraction, for the 'third plane', that 'margin' where the artist may be denied, could be a space of memory and ritual, to which he need only refer. The logic of dandyism as a mode of conceptual art assumes a view of the dandy not as engaged in a foppish, decadent pursuit but (following Brummel) as an attempt to get over the class distinction by creating one's own aristocracy, doing what aristocrats do but doing it better, secure in the knowledge that their order and the natural superiority it implies was on a false premise: that man was born unequal. Brummel seized the controls on behalf of the low-born. That he occupied an untenable position was his strength, not his weakness, as Baudelaire recognised.

'Detained' in a waiting-room where much is expected but little is offered - a play of modalities, the odd quotation, a little social strategy or false bonhomie (the idea of a fashionable gallery in a terraced house has never been so cruelly satirised) - the viewer may leave without enlightenment. Or a feeling that 'pure periphery' is the only place to be.