The faded glamour of flying, jet lag and a biennial for New Orleans 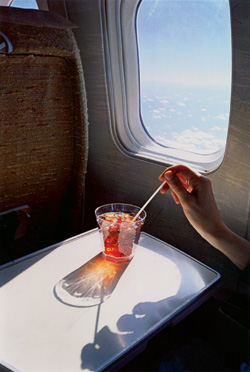 Jet lag is the consequence of alterations to the body’s ‘circadian rhythm’ – the 24-hour cycle in the physiological processes of all living beings. Crossing time zones during long-haul air travel disrupts the body’s natural pattern alignment to daylight and darkness; it takes time to readjust to the rhythm set by the new territory, hence the lag. Conflict between circadian rhythms can also be caused by an atypical lifestyle – shift work, for example. Thus, factory workers are as prone to jet lag as international art professionals.

Jet lag induces irritability, a sense of loneliness, unpredictable sleep patterns, euphoric surges of energy and peculiar temporal relations. Cayce Pollard, the heroine of William Gibson’s novel Pattern Recognition (2003), suffers from acute jet lag, which she describes as ‘soul-delay’: a space/time dislocation arising from your soul trailing behind you in the jet stream. Pollard is a freelance marketing consultant for an advertising agency, a ‘cool hunter’ specializing in pattern recognition. Perversely, she has a debilitating allergic reaction to brand names and logos. Set in an alternate present, Pattern Recognition follows Pollard’s worldwide tracking of ‘the footage’ – a precursor to contemporary social Internet formats such as YouTube – closely followed by rumour-marketing gurus and Russian mafia. Thriller and love story are neatly folded in among Postmodern social observation. The legacy of 9/11, globalization and the loss of a psycho-geographic sense of place provide a bigger picture. Jet lag in the novel is both theme and motif, a metaphor for the alienation and exhaustion felt by the heroine at being caught in a retail conspiracy and a means to explore the wider implications of both the ennui and liminal potentiality of the cultural logic of late capitalism.

Modern life is defined, in part, by mobility. Upbeat touristic adventures may produce an aesthetic cosmopolitanism, yet the melancholy collision of modern technology and the human soul is perhaps most profoundly induced by the careless brutality of the Easyjet experience and the anxiety of carbon footprints. The mundane metaphysics of flying is perfectly captured by Jean Baudrillard. Following Baudrillard’s death earlier this year the British writer and journalist Geoff Dyer, in a homage to the French philosopher, quoted a phrase from Cool Memories (1996) in which Baudrillard describes the moment at baggage reclaim where ‘after the death which a flight always to some extent represents, everyone comes to pick up what belonged to them in a previous life. It is like the distribution of what each person will have the right to take with him into the hereafter.’1

The television disaster series Lost seems to have developed a Postmodern portrayal of the afterlife as its plotline – a palliative, perhaps, to fears of the ‘terrorist threat’ in the same way that 1950s’ Hollywood science-fiction films were a means for America to work through their most excessive Cold War fears and technological nightmares. But whatever its contested meaning, being stranded on a desert island following a plane crash and revisited by jump cuts to your shadowy past with no visible means of escape is also like an extreme example of jet lag. It’s all more than enough to make you think twice before embarking on that grand tour this summer.

By contrast William Eggleston’s photograph Untitled (Glass in Airplane) (c. 1965–74) beautifully encapsulates the promise of air travel. Apparently taken en route to New Orleans, sunlight hits what appears to be a glass of rum and Coke and ice cubes resting on an aeroplane tray. A hand, poised with a swizzle stick, is set against a view of clouds through the window. It’s an image that belongs to a pre-deregulation, pre-oil crisis era when flying was still glamorous: the jet-set allure residing in its inaccessibility, the attraction hinging on an odd mix of magic and envy. The image also marks the arrival of colour photography as an acceptable high-art aesthetic; a now equally nostalgic pre-digital Kodachrome moment of dye-transfer printing and radical colour saturation. Eggleston very elegantly shows us the intoxicating potential of colour and images – the glass of rum and Coke is more sublime than the view of the clouds. The image has a wonderful stillness, which is strange considering it was taken while ploughing through the air at 30,000 feet. In this sense it is an entirely interiorized portrait – a meditation on being and time as much as on class and wealth.

Wolfgang Tillmans’ photograph JAL (1997) provides a contemporary riposte to Eggleston. The image is a close-up of jet engines taken from the window of an airborne plane, with a horizon line providing a backdrop. Like Eggleston, Tillmans records transient, enthralling moments, juxtaposing the intimate or mundane with the sublime. In 2007, however, it is hard not to project a rather more apocalyptic vision onto this picture: the aeroplane as ultimate terrorist vehicle and environmental enemy number one.

New Orleans has just been given a biennial of contemporary art. Curated by Dan Cameron, Director of Visual Arts at the Contemporary Arts Center in New Orleans, and produced by U.S. Biennial, Inc., ‘PROSPECT.1’ will open across the city in October 2008. The calculated use of culture as a diplomatic tool is in sharp relief to the governmental thoughtlessness in the aftermath of Hurricane Katrina and should well be greeted with suspicion. It’s a synthetic alternative to a more organic form of cultural expression – for a real carnival, in the sense of a sanctioned life-affirming disruption in the face of adversity, you need look no further than the impoverished but jubilant 2006 Mardi Gras that took place just six months after the flooding.

But it’s too easy to dismiss this biennial. As a creative attempt to redevelop the city as a cultural destination, encourage urban regeneration, improve a devastated economy and reinvigorate the community it is undoubtedly a good thing and could be a strong contribution to contemporary cultural discourse. If competing political, economic and social agendas don’t overtly hijack the artistic enterprise, as biennials go it could be interesting to visit. The event is designed specifically to attract both local and international art tourists. I’m still trying to process what it would mean to board yet another plane to get there.

Polly Staple is a curator based in London, and editor at large of frieze.