Material production and the march of history

Listening to the artist Sam Lewitt discuss his work is like hearing an abridged history of Marxist philosophy. Of course, the heady revolutionary claims of Karl Marx’s writings present an alluring worldview that has been adopted by several generations of artists and continues to be professed today – albeit with varying degrees of sincerity and intellectual acuity. However, Lewitt’s sculptures and installation works – noted for their use of industrial-grade materials and machinery – engage with dialectical materialism in a manner that is anything but lazily Marxist.

Early indicators of Lewitt’s interest in exploring the interplay between material production and the march of history were evident at his first solo exhibition with the New York-based Miguel Abreu Gallery in 2007. Its title, ‘Patience … Fortitude’, was a nod to names of the two stone lions that flank the entrance to the famous 42nd Street New York Public Library, and the show included a series of eight, Mylar-covered dust jackets for fictitious books mounted to the gallery wall. Among the fabricated covers, none of which had any authorial attribution, was one titled A.D. (The World Within) (2006), which depicts a nautilus shell alongside the subheading ‘an indwelling thing’. This is a subtle nod to Georg Hegel’s 1824 Lectures on the Philosophy of Religion, in which the philosopher discussed the idea of the ‘indwelling’ spirit and faith as a form of knowledge. By linking imagined literary works to the public library – a real-life archive – Lewitt critiques the certitude of institutional forms through which knowledge is disseminated.

Lewitt’s 2008 exhibition at Miguel Abreu, ‘I hereby promise … etc.’, continued to examine networks invested in the dissemination of information and capital, with a commentary upon monetary valuation. Art Should be … etc. Part 1 (2008) comprised two coins labelled as ‘Antique Gold’ that were, in fact, cheap brass alloy. Featuring the profile of a roaring lion, the coins were inscribed with Latin legends: res ipsa loquitur (‘the thing itself speaks’) and Tertium comparationis (‘the third [part] of a comparison’). Referencing Nixon’s controversial 1971 reversal of the us’s adherence to a gold-based global currency exchange, Lewitt wanted to highlight how objects gain value, in his own words, ‘through a series of ideological impositions’.

If currency is one device Lewitt has used as a means to play with notions of ideological dissemination, his 2011 show, ‘0110_Universal-City_1010’, at Berlin’s Galerie Daniel Buchholz, utilized antiquated printing-press equipment to continue this investigation. In a series of large-scale chromogenic prints mounted on aluminium, ‘Paper Citizens’ (2010), Lewitt photographed individual components of letterpress technology – typefaces, steel frames, locking elements – then, adopting an accretive photo-collage process, he methodically created a single photographic image of a printing plate set against a white background. Quoting from historical tracts discussing novel inventions, among them an Ancient Egyptian steam engine, what might appear to be a playful rumination on the interplay between archaic and digital technologies is, in fact, a complex meditation upon the ‘constructed’ nature of literacy itself. And, for Lewitt, as for Michel Foucault in The Order of Things (1970), the regulated system of letterset type represents a more efficient way of classifying the world.

Lewitt’s recent works continue to incorporate the industrial techniques and materials that underpin the capital system of which he is critical. His 2012 Whitney Biennial installation, Fluid Employment, included Ferrofluid, a nasa-developed lubricant now used in everything from computer engineering to military aviation. Spread across a section of the gallery floor, the viscous fluid – which contains ferromagnetic particles – shifted between solid and colloidal states, alternately repelled and pushed by a series of magnets and fans. For Lewitt, the protean character of Ferrofluid is analogous to the porous boundary Marx saw between the material and immaterial attribution of value.

For his 2014 show, ‘Casual Encounters’, at Miguel Abreu, Lewitt mounted large, copper-clad plastic sculptural installations, similar to those which had appeared in the 2012 group show, ‘and Materials and Money and Crisis’, which he co-organized with Richard Birkett at Vienna’s MUMOK. In Weak Local Split Decision Lineament (2014), Lewitt programmed a milling machine to etch circuit-like forms into the surface of the copper. With Regrettable Tool (2014), the hanging shredded remnants of unsuccessful attempts at computer-controlled milling recalled Richard Serra’s early sculpture Belts (1966–67), a series of mounted sinuous loops of vulcanized rubber and incandescent neon tubing.

Meanwhile, at the entrance of the gallery, an animation using an algorithm favoured by architects to correlate the design of interior spaces to the predicted movements of future occupants, mapped the ideal vantage points for viewing works throughout the gallery. If the circuits Lewitt depicts in works such as Weak Local Split Decision Lineament can be said to be representative of the channels that regulate streams of information, his algorithm envisions the gallery as its own circuit, one in which the audience is to be similarly guided. Lewitt’s viewer, much like data being channelled, finds movement in the world restricted by the material forms that he has come to depend on. Man is the measure of all things, indeed.

Sam Lewitt lives and works in Brooklyn, USA. His recent solo exhibitions include 'Casual Encounters' at Miguel Abreu Gallery, New York, which closed in January, and 'Scorched Earth: Second Salvage' at the Leopold-Hoesch-Museum in Düren, Germany, which closed in February. Works by Lewitt are included in several public collections, among them the Whitney Museum and The Museum of Modern Art, New York. 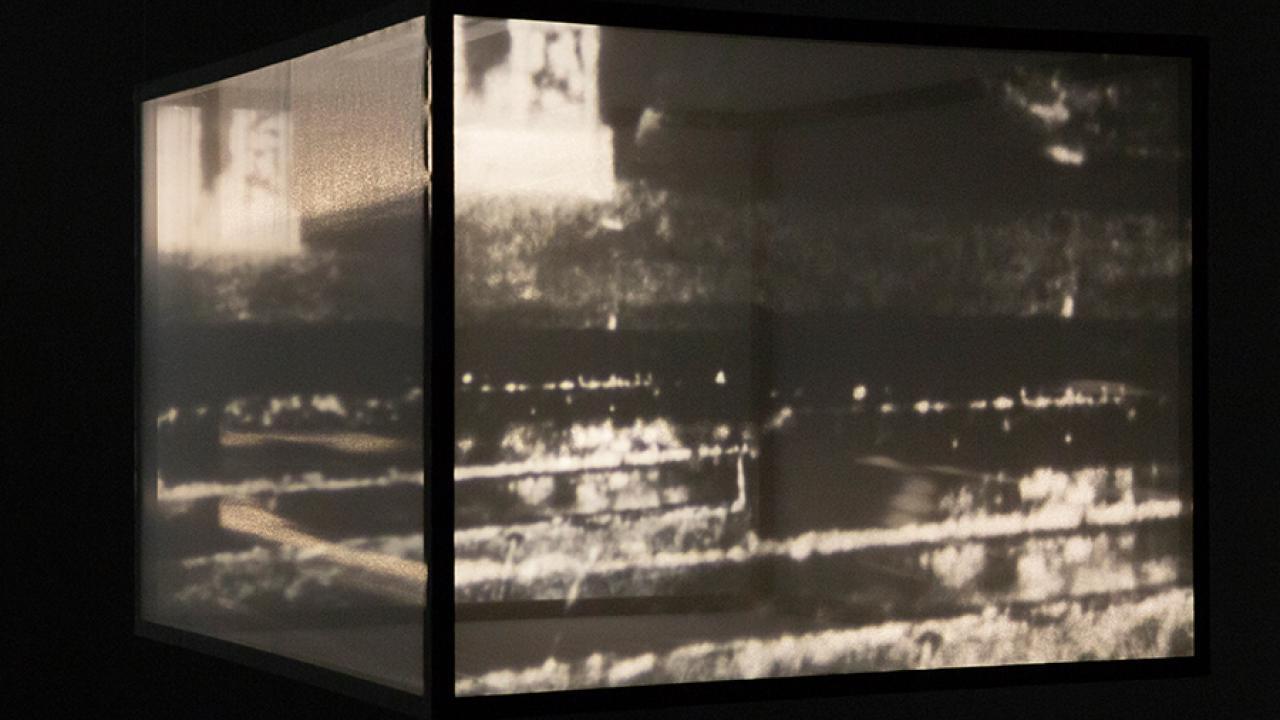 Reviews
Raha Raissnia’s Secrets of the Recent Past

In the Iranian artist’s work, memory is smudged, an accretion of sorrows or nameless longings, a pile of waterlogged books in a flooded library