Robert Ashley performance as part of ‘Talk Show’ at the ICA, London 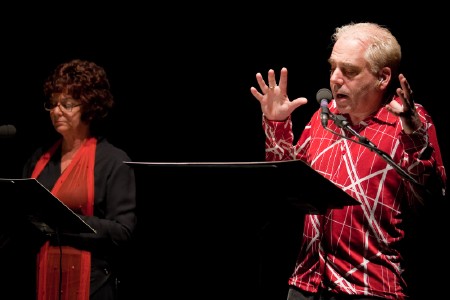 Following in the footsteps of the ICA’s ‘Nought to Sixty’ programme last summer, ‘Talk Show’ is an ambitious month-long season that encompasses exhibitions, numerous performances, five residencies and more than 100 participants. With that breadth, ‘Talk Show’ is scrappy in spirit while remaining impressively coherent. Curated by artist and designer Will Holder, with the ICA’s Richard Birkett and Jennifer Thatcher, the programme’s central theme – speech and, by extension, the voice – is disarmingly simple, though incorporates a broad and theoretically complex set of ideas, from speech acts to Althusserian interpellation.

Despite its numerous components, the emphasis of ‘Talk Show’ is placed squarely on performance. The season opened on Tuesday with the UK premiere of American composer Robert Ashley’s Foreign Experiences (1994), part of his epic Now Eleanor’s Idea (1985-94) opera tetralogy. The tetralogy grapples with the dying mythology of the American West, and Foreign Experiences is appropriately located in a sprawling Californian wasteland. The performance was simply staged, without the use of moving image that has characterized some of Ashley’s best known work. Against this staging, a babel of fragmented and unidentified voices was unleashed, with each of the two performers (Sam Ashley and Jacqueline Humbert) assuming a multitude of unidentified characters and voices.

The result was a dense acoustic experience, an exercise in aural abstraction and theatrical minimalism that nonetheless created a deeply anxious atmosphere, and communicated the contours of a radically layered narrative. Rife with paranoia and bureaucratic conspiracy, Foreign Experiences mapped an acoustic landscape that recalled the California of Thomas Pynchon’s The Crying of Lot 49 (1966), in part through the assemblage of prerecorded vocals and orchestral elements that was mixed live on the night.

The duet performed at the ICA was derived from an earlier seven-voice version, the resolutely physical performances positioned within an army of ghostly voices that emanated from throughout the sold-out theatre space. The slow unraveling of a single consciousness was charted through the cacophony of these disembodied speakers (which conjured everything from EVP to the voices in your head). The formal and technical layering of the music was matched by the layering of the opera’s narrative; it also mirrored Ashley’s depiction of multiple, often conflicting, layers of consciousness and unconsciousness. This synchronicity accounted for much of the experiential intensity of the work, with the structural cohesion acting in counterpoint to the apparent surface fragmentation of the work.

Meanwhile, the upper gallery featured a seven-monitor presentation of Ashley’s seminal Perfect Lives (1980), a seven-episode opera first broadcast on Channel 4. The central character of Foreign Experiences is first encountered in Perfect Lives. Viewing this earlier video opera, charting associative lines between different groups of work, gave some sense of the internal logic of Ashley’s world. When the ICA closed its Live Arts and Media Department late last year, it promised to integrate performance into the exhibitions programme. If the opening night of ‘Talk Show’ was anything to go by, the result is a successful performance-based programme that links to activity across the building, providing curatorial context and background for individual works. Other highlights from the ‘Talk Show’ season include residencies by Fia Backström, castillo/corrales and Melanie Gilligan, as well as performances by Sharon Hayes, Stephen Sutcliffe, Dexter Sinister, Jimmy Robert & Ian White.