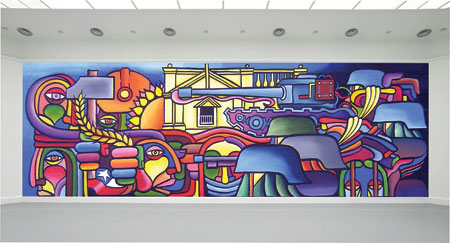 A canonical effort, ‘Forms of Resistance: Artists and the Desire for Social Change from 1871 to the Present’ set out to map the role that art and artists have played in major societal transformations. The exhibition was grounded in historical moments that conflated social upheaval with vanguard artistic energies, such as the Paris Commune – seen through William Morris and Gustave Courbet’s involvement with socialist movements – and Russian Constructivism – embodied in El Lissitzky’s Prounenraum (Proun Space, 1923/1970)). A delicate hanging of Bauhaus artists was absorbing in every detail, with textile works from the 1920s (by Susan Ackermann, Anni Albers, Kitty van der Mijll Dekker and Gunta Stölz) as examples of a kind of empowerment that is rich in its implications.
The curators – Phillip van den Bossche, Will Bradley and Charles Esche – supplemented the show with material sourced from the margins of art history, including pieces by Crossroads Community founder Bonnie Sherk and anarchist street theatre groups such as the San Francisco Diggers and their Danish counterparts Solvognen. Elsewhere, artists Charlotte and Sture Johannesson re-staged their 1976 memorial exhibition dedicated to Red Army Faction co-founder Ulrike Meinhof (‘On Germany – In Time’), which was censored by the authorities when it was originally due to be shown in Stockholm. A vindication of suppressed art, the installation also represents the eruption of an unruly political imagination: next to Meinhof’s funeral wreath hangs a tapestry by Charlotte Johannesson showing Snoopy sitting on top of his dramatically tilted kennel, its roof the colours of the German flag, shooting a machine gun at a toy-sized tank in the bottom corner. Here punk-style Feminism meets militancy and upsets every aesthetic parameter in the book. The Johannessons’ installation, at once mournful, vulnerable and confrontational, connects logically to more recent projects, such as Marco Scotini’s film archive documenting current struggles, Disobedience (2005–ongoing).

On a philosophical level the exhibition ranged from the artistic Utopias of the Modernist avant-gardes through to North American art–activist ideology, which held, in the words of the celebrated 1988 poster by artist collective Gran Fury, that ‘art is not enough’. The latter stance represented a movement away from the Modernist mix of antagonism and speculation towards political reason and teleology. This trajectory is underscored by the way the curators have placed art activism, Feminism, queer art and institutional critique in one room, a decision that tends to conflate their respective strategies and rationales. However, resistance in art does not manifest itself through organized processes alone. For instance, if we look at the Situationists – as driven by political pathos as anyone – their proposals for a naked city and dérive were not exactly vehicles for sober pragmatism. And thus one could effectively counter claims that ‘art is not enough’ with the retort that ‘resistance is not enough’.

‘Forms of Resistance’ eschews the word ‘political’ in its title, presumably as a justifiable means of factoring out what might otherwise become an overly dominant consideration: the political exploitation of art in totalitarian states. But the ambiguity of art’s relation to the political creeps in anyway. The curators write that the exhibition ‘shows how art can be critical of politics, and a symbol of the desire for revolution’. While the first part of this quote highlights one of art’s greatest strengths – its potential to address and break open the political sphere – the second part stabilizes the play of signification again in the artistic desire for social change as subject to symbolic and revolutionary closure.

Although the show’s perspective was more historical than contemporary, it nonetheless created a basis to rethink certain tendencies in today’s art mainstream. It might be interesting, for example, to reframe the work of an influential figure such as Felix Gonzalez-Torres through the concept of resistance, particularly after the installation of his work in the US Pavilion at last year’s Venice Biennale made it look unfamiliarly remote and drab and assisted in critically severing it from his collaborative work as part of Group Material.

Given the breadth of the subject, ‘Forms of Resistance’ could easily have filled several galleries and clearly called for curatorial precision. Yet, while the display made for a structured and selective historical overview, the exhibition still felt pressed for space, and in an ideal world there would also have been room for Auto-Destructive Art, Arte Povera, Tropicalism and Conceptualism. But maybe this is just indicative of the relevance of the theme.

Art is not least oppositional when, in an environment of potential economic or political instrumentalization, it orients itself towards a via negativa of alienation, absence, scepticism, discomfort and loss. Although ‘Forms of Resistance’ didn’t provide a springboard for investigating this particular aspect, it succeeded in showing that it is possible to render substantially differing approaches – to form, futurist thinking and empowering mobilization – part of one whole.