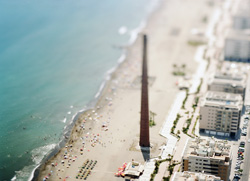 At this year’s 57th Berlinale it was obvious that Ayse Erkmen wouldn’t bring home the Golden Bear for her spectacular short film Coffee (2007). In fact, she wasn’t even in the running. Instead, her work was included in ‘Forum Expanded’, one of at least ten events taking place outside the festival competition itself. The projects in Forum Expanded – including an exhibition in a non-profit art space, two short film programmes, a curated series of 1960s’ films from Paris and New York, and numerous satellite events with little tangible connection to the overall programme – didn’t so much expand the possibilities of film as fall into the cracks between the established categories.

While the programme freely combined works by well-known artists and filmmakers, it didn’t reflect a clear grasp of the relationship (or lack thereof) between the two. The short programme ‘Laborsituationen’ (Laboratory situation), for instance, mainly included experimental films that dealt with the physical qualities of the medium; yet it closed with Erkmen’s film, which was clearly more narrative and conceptual than experimental.

Forum Expanded did, however, cleverly capitalize on the concurrent appearance of the excellent exhibition ‘Beyond Cinema’ at the Hamburger Bahnhof, as well as the upcoming documenta 12 programme ‘100 Days of Cinema’, by hosting a symposium called ‘Expanding Film Festivals’, with art curators and film festival organizers. The conference sparked a debate about the crossover between the art world and the film festival circuit, although ultimately this wasn’t much of a debate, given that members of either camp can intuit the differences for themselves. The more important questions concerned the practicalities of how artists approach the contexts in which their films are shown. Hamburger Bahnhof curator Gabriele Knapstein stressed the importance of the artists’ role – suggesting that they should take into account the poor acoustics of exhibition spaces when producing their films, and even that they should create editions that institutions can afford to screen.

The need for artists to consider the context in which their works are screened was evident last year, when Sharon Lockhart screened Pine Flat (2005) in both the Berlinale programme and in a gallery, when in fact the film was much better suited to a gallery, where viewers could come and go. This year it was the inclusion of Eve Sussman’s The Rape of the Sabine Women (2005) that attempted to straddle the film and art worlds, but this over-
produced, superficial spectacle showed why the financial and technical structure of a blockbuster film can’t necessarily be applied to a work of art.
Although I didn’t see Robert de Niro at the screening of Erkmen’s film, and nor were any artists likely to have been invited to the glamorous première of Jennifer Lopez’s new movie, there’s something to be said for preserving or observing the differences between the two realms; there’s a reason why we call one a ‘world’ and the other an ‘industry’.