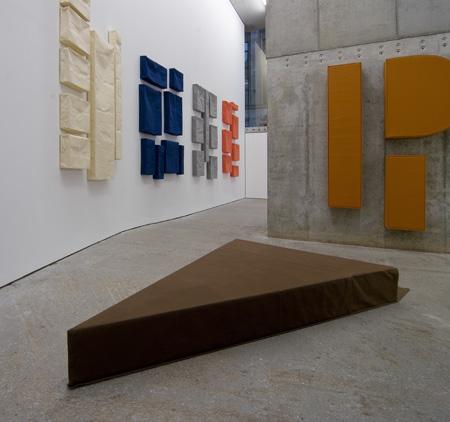 To reconsider Franz Erhard Walther’s oeuvre in the context of Berlin’s teeming contemporary art scene is to recognize how relevant his work has become to younger artists, and yet how different a world he inhabits from the generations that have succeeded him. Straddling conceptualism, performance art, abstract painting and Minimalist sculpture, Walther resists being confined to a single marketable identity. His work seems to uncannily presage later trends: his 1960s performances predicted the so-called relational aesthetics generation that emerged in the 1990s; his early deconstructions of the painting support startlingly resemble German painting of the last decade; his conflation of Minimalism and block typefaces has recently been taken up in Gabriel Kuri’s marble ‘prop’ sculptures. Yet the differences run deeper than the similarities. Walther’s work looks awkward and innocent in comparison with his younger inheritors. They want to be recognizable; he doesn’t want to be pigeonholed.

For this exhibition, curator Alexander Koch assembled a concise but detailed overview of Walther’s oeuvre from the late ’50s to the mid-’90s. The gallery’s concrete architecture was furnished with raw MDF walls and vitrines featuring selections from each major series, along with combinations of photographic and textual documentation to supplement sculptural appendages that have survived from his early performance works. Installed across all three floors, the installation was not strictly chronological, but plotted to illuminate Walther’s career as a fluctuating argument for and against the traditional notion of an art work as a simple object in a gallery. If his later objects are not primarily tools to facilitate performances, they require interaction to complete them. Complicating matters further, they are also to be seen as sculptures – with the material specificity of the work of his Minimalist contemporaries – rather than mere stage props.

In the early 1960s, Walther analyzed the material conditions of painting in a few simple steps: an Informel crayon sketch, a bare sheet of paper with a pencilled-in frame, a stretcher covered with bandaging. In 2 x 2 Nesselorden (2 x 2 Nettle Medals, 1962–3), the classic pictorial rectangle of a raw, stretched canvas is reduced to two triangles of folded fabric, provisional as a cartoon bowtie. Ironically, it is difficult, after half a century, to distinguish between marks of age and those purposely applied by Walther using vegetable oil or coffee. Like Sergej Jensen today – whose paintings often look as though they have languished in a dusty attic since the early 1960s – Walther sabotaged the commodity value of painting by making it look prematurely aged.

Kissen (Cushion, 1962) consists of two sheets of paper glued along their edges and stuffed like an enlarged ravioli. It is not a pillow, a painting or a sculpture but something in between. These tentative early steps, with their narrative transformations, already suggest performance. In similar works from the same era, Walther can be seen struggling to escape the limits of the picture plane. A monitor shows the film Proportionbestimmungen (Designation of Dimensions, 1962–72), in which the parameters of the empty white screen are challenged by the artist’s outspread hands. Its lightness and transparency basically designate pictoriality. It is a pert illustration of Walther’s maxim, ‘Pictures are in your head’.
The subsequent performances of the late 1960s, enacted in the stark landscapes of the Hochrhön area, near Fulda, were structural studies of space and movement as well as allegories of existential theatre, testing the mutually attracting binaries of autonomy and community, isolation and desire. Walther’s original photographs of these performances show anonymous figures in a featureless field plotted around canvas strips and plywood cubicles. You would expect the stakes and screens of Ausdehnung mit Zentrum (Expansion with Centre, 1972), to be no more than functional aids, but they prove to double as subtly nuanced sculptures.

By the 1980s, Walther shifted his emphasis from the performative to the sculptural side of this equation. The ‘Configurations’ series (1992–3) fragments a rectangular template into compositions of smaller ones, each a soft Claes Oldenburg-ish block of coloured canvas to be arranged on the wall in accordance with the exhibition architecture, and then regrouped into its original form, requiring a minimum of storage space. The ecological slant is a version of Walther’s abiding philosophy: that what you do with objects comes before their ‘image-function’ but does not necessarily supplant it. Each cluster is a group of monochrome paintings as well as a self-reflexive representation of the cycle of storing and exhibiting. Poignantly, it also suggests the features of a face, a provisional identity that is always contingent, ready to be reconfigured on another occasion.

Similarly, but on a grander scale, the six-metre-wide Flacher Raum (Even Space, 1979) confirms that Walther’s is essentially a humanistic art, despite its geometrical rigour. In this work, monumental drapes of canvas level out onto the floor to accommodate the feet of a standing participant who can walk its length and enter a box-shaped cavity at the far left. Having laboured throughout the 1960s to free himself from the limits of painting, it is as though Walther’s surrogate figure were being helplessly reabsorbed into the vast pictorial space opened up by the expanse of cream-coloured canvas.