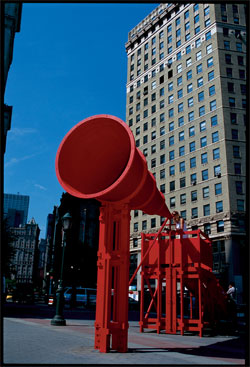 There has been a lot of talk about freedom of expression lately. At the Republican Convention in September keynote firebrand speaker Zell Miller, Governor of Georgia, memorably roused the party faithful’s scorn for the ‘liberal media’ by declaring that ‘it is the soldier, not the reporter, who has given us the freedom of the press; it is the soldier, not the poet, who has given us freedom of speech.’ It was a statement that, while somehow self-evident, seemed in the pro-war, dissent-squelching context to imply that speech was a reward, not a constitutional right. (Miller later the same night went on to challenge a non-compliant talk show host to a good old-fashioned Southern duel.)
But you don’t have to have your own bully pulpit, convention or cable network to air your views. For nearly three months this autumn New Yorkers officially had the opportunity to vent in public about anything they wanted (not that the locals usually wait for formal permission before ranting in the open). Two decades after it was first erected on the sandy riverbank landfill created by the construction of the World Trade Center, the Freedom of Expression National Monument made a comeback in the more politically and civically significant location of Foley Square. The creation of architect Laurie Hawkinson, Performance artist John Malpede and artist Erika Rothenberg the FENM – a giant fire-engine-red megaphone mounted on a ramping wooden scaffold – was a product of Reagan-era feelings of frustration and powerlessness. This time around, in the context of the Patriot Act and a timid if free press, setting up the fondly remembered big red soapbox across the street from the New York supreme court, the Federal Building and the local offices of the Homeland Security Department seemed less a quaint nostalgic throwback than a nearly radical symbolic gesture.
Sponsored by the non-profit Creative Time (which funded the original ‘Art on the Beach’ projects from 1978 to 1985) and the Lower Manhattan Cultural Council, the monument at first glance reminds you of those Soviet Constructivist propaganda podiums and Agitprop towers, most of which remained unrealized projects on Bolshevik to-do lists: fantasies where photomontaged Lenins or Trotskys were pictured in mid-exclamation, arms thrust forward, leaning out over their rapt masses. But there are associations closer to home. Both Foley Square and Union Square, to the north, were once places where milk crate radicals of every stripe came to attract an audience and where believers or the merely bored and curious came to hear speakers extol the glories of socialism or rail against the monopolies or demand universal suffrage.
Climbing the gangway-like ramp to the megaphone’s narrow mouthpiece, you can’t help feel a bit like W.E.B. Du Bois or Jack Reed, and wonder about a time when having a voice and a stepladder and a lunchtime crowd could actually be expected to change a few minds or even spark a riot. During a recent sunny early autumn afternoon it seemed an unlikely possibility that anyone would take up the open and ‘cordial’ (according to a nearby plaque) invitation to speak up, or that others would care to listen if they did. The square, traversed by young on-the-go assistant DAs with mobile phones pressed to their ears, resigned-looking office workers from the nearby Department of Motor Vehicles taking cigarette breaks and generally lost-looking pedestrians obviously seeking one municipal office or another, didn’t look promising.
But within minutes the monumental megaphone had attracted its first amateur orator, a young out-of-state wag who, noting that it was aimed directly at the court-house steps, demanded that the authorities ‘free Martha Stewart now!’ as if she were one of the Chicago Seven. Next up was a middle-aged gentleman with a neat business suit and a rucksack on his back, who ascended the ramp with an ecclesiastic solemnity that prefaced his serious message. ‘Now!’ he shouted at a volume sufficient to ensure that everyone in this box canyon of government buildings could hear him, ‘is the time ...’ Without anyone condescending to turn and look or break their busy 21st-century stride, a tangible if nearly imperceptible ripple of suspense spread across the square. ‘The time for what?’ seemed to be the unspoken question contained by the inheld breath of a tiny collective pause. ‘… to stop this illegal dirty war in Iraq!’ and the spell was broken; they’d heard this one before. He’d lost them.
Before briskly walking off to who knows what pressing engagement, the gentleman leaned against the sturdy crimson scaffold and admitted that he ‘tried to express [him]self nearly everyday’. And nobody within earshot voiced any doubt that this must be true. While he may not have possessed the fiery oratorical skills of an Emma Goldman or the rhetorical command of Du Bois, he was doing what he could. During the final stretch of an interminable electoral horserace season, that was more than a lot of people could say for themselves.