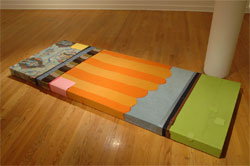 The art in ‘Frequency’ – which curators Christine Y. Kim and Thelma Golden are keen to point out is not ‘Freestyle II’ – veers between the flashy and the subdued. It is easy to understand why the exhibition might be taken for a continuation of the critically acclaimed and influential survey of young black artists that The Studio Museum staged in 2001. The criterion for selection is the same – hinging on the identity of the maker rather than the art made. Such an upside-down (to my mind) curatorial premise threatens to leave the art to chance, but twice now it has yielded coherent and successful group shows at the museum. This is primarily because the characteristic that unites the artists – that is, their black identity – also unites their work. Specifically, in the repeated iterations of black history on display, identity emerged as a complex negotiation between the present and the past.

History assumed the form of Africa as a lost paradise, the legacy of slavery and the heady years of the civil rights movement – as well as childhood and, in a broad sense, socially constructed identities. Michael Paul Britto’s hilarious trailer for a spoof ‘blaxpoitation’ movie Dirrrty Harriet Tubman (2005) gives the legendary black abolitionist Harriet Tubman, still in 19th-century garb and righteously angry as ever, a weapon and the run of the New York City subway and parks. In his ‘Sound Suit’ series (2005) Nick Cave presented three standing figures in richly patterned and sequined African dress, with hoods covering their faces. Unlike Yinka Shonibare’s fey models, these stood like threatening sentinels, conjuring the unease that runs through anthropological museums. Mickalene Thomas, less successfully, creates splashy rhinestone-covered canvases of women from the 1970s, clawing at each other in cocktail lounges.

The problem with such large gestures towards particular histories and social or racial stereotypes, though visually impressive, is their inability to convince the viewer of personal relevance. This is what once elevated, for instance, David Hammons’ renowned drawings created using basketballs bounced in Harlem dust. In a similar vein Shinique Amie Smith exhibited a large bale of brightly coloured clothing, bound into a cube that was bursting at the seams. The work suggested the enormity of physical displacement – a deliberately failed attempt at Minimalism that sat like the figurative elephant in the room – but undergirded these interpretations with the reality of the clothing collected.

The use of a crafts aesthetic to guarantee the works’ sincerity was particularly effective with those artists who were more melancholic. Jina Valentine's cut-outs showed promise. In Appetite for Destruction: Top Forty Best-Selling Albums Ever (2005) she stencilled and cut out the Guns ‘n’ Roses album cover design from faded kitchen wallpaper, letting the paper fall into the gallery space like a collapsed dancer. Rashawn Griffin installed a decrepit old stuffed chair and a thin foam mattress that were steeped in poverty. Looking like an only slightly softer version of Robert Rauschenberg’s bed, Untitled (Self-Portrait) (2005) appeared anthropomorphic, with belts and ties circling the foam cushion. And, like a Rauschenberg, it could be read with biographic literalness, with faded Star Wars sheets stuffed next to thin neck-ties and 1970s’ fabric to depict both a specific and shared youth and early manhood.

The Italian-born Roberto Visani also showed excellent sculptural works that incorporated and refashioned found items. In Rouge Serpentine (2005) he balanced the hose of a vacuum cleaner on top of a skateboard, tying bits of traditional African fabric around it and moulding it improbably into the shape of a snake. The works had a sly sense of humour that spun into both verbal and material puns: Corner Cutters (2005) was a bunch of legs made out of cardboard and thrown into a rubbish bin, with dotted lines along the ridges of the limbs to mark where they should, presumably, be cut. For Invisible RPG (2005) Visani hung a clear plastic rocket grenade launcher from an airport metal detector, depicting the threat of terrorism both as an imaginary mania and as a slippery, real enemy. For a show where much of the work was implicitly political, on principles of advocacy or revision, Visani’s mocking political gestures oddly seemed more joyful.

Another highlight was Isaac Diggs, who created a vast array of screen prints, taken from digital video stills, covering a wall with plants and flowers. Onto a panel depicting bananas hanging from a tree he projected a looped video of a hand reaching for the fruit – a witty technological and geographical update of the myth of Zeuxis, in which birds peck at the grapes on a painted fresco. As with this example, ‘Frequency’ showed the variety of ways the past can be reshaped by the present.