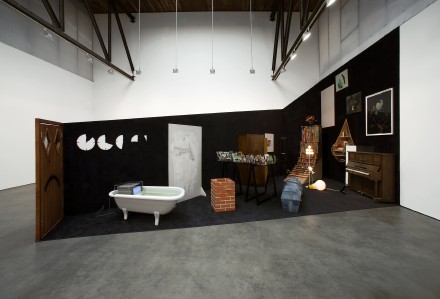 Friedrich Kunath projected a multitude of obscure anxieties in his recent show at Andrea Rosen, but the greatest of all was surely stage fright. There was no stage, as such, only something like a dressing-room: all the objects and images that comprised the show were arranged within this dark, rather domestic diorama (‘Twilight’, 2007), which spread outwards and upwards as though it were only an effect of a long shadow cast by the entrance door at the near end. But one could see how the gallery could be read as a stage, as a space of exposure: it was as though the audience had hushed and Kunath had walked through the door, out of his lair and gone; the lights were on, but the show was over, and we were free to peek at the contents of his hideout, which is also his unconscious – and a very kooky one at that.

All the elements of the show were married exquisitely by ‘Twilight’, yet they were conceived as discrete art works. One construction (Untitled, 2007) consists of a monitor, showing footage of a boat at sea, suspended in a bathtub filled with water. East–West Germany (2007) is a divided wardrobe: one half ornate Victorian, the other functional modern; the two halves join to contain a pile of paintings. Where in the World Are You Now (2007) is also the product of a severance, this time of a piano, though here the whole is remade by a mirror fixed to the severed end. And in another rehearsal of the idea of halves and shadows, there is a table in the shape of a grand piano which supports innumerable framed photographs of the backs of pedestrians’ heads (Untitled, 2007). Other peculiarities included: an elongated stool, its legs being chewed by a stuffed beaver (Untitled, 2007); a high, stepped wooden construction, half of which has been marbleized with coloured paint (Untitled, 2007); and a series of paintings of figures and birds and enclosures like caves. The mood was ghostly, but one sensed that Kunath was not long gone: prominent was a painting, If the Phone Don’t Ring, You’ll Know It’s Me (2007), which depicts a figure whose body is barely visible except for an arm that wields a paintbrush and appears to be painting itself out of the picture.

Critics discussing the work of this young German have often whispered about love and melancholy and impossibility and the absurd, but none has yet called him a Surrealist. I don’t see why: it’s hardly an accusation of derivative redundancy. Indeed, if the success of the US television series Six Feet Under is anything to go by, innumerable stepchildren of the style are still vivid and meaningful. It is the magical avant-garde that Kunath wants to recapture. He wants to be Des Esseintes, secluded in his mansion in Joris-Karl Huysmans’ Against Nature (1884), or Louis Aragon’s avatar, wandering the streets in Paris Peasant (1926). There was, perhaps, a nod to the boulevards in Kunath’s sequence of peculiarly scaled lightbulbs and street lamps – the street lamp tiny and the lightbulb enormous (Untitled, 2006). There was even, maybe, a whiff of the rooftops in his hollow, rectangular construction of bricks (Untitled, 2007), which would be a chimney if it didn’t have a CD stuck half-way out of the mortar.

But then Kunath has no manifesto, no declared Freudian programme, and one is left wondering what all this enjoyable mood-setting might mean. I was thinking about this when I came across an article by Michael Hirschorn in September’s issue of Atlantic Monthly. He described an aesthetic that is ‘an embrace of the odd against the blandly mainstream. It features mannered ingenuousness, an embrace of small moments, narrative randomness ...’. Check, check, check, check, I thought, and was surprised. This is ‘quirk’, as Hirschorn defines it, a vein of affected oddity that he sees in Wes Anderson’s films, Augusten Burroughs’ memoirs and some of David Byrne’s music, and which he argues – pushing things somewhat – is ‘the ruling sensibility of Gen-X indie culture’. The avant-garde may be dead, but many still cherish the notion that artists speak from the margins of ‘ruling sensibilities’. Kunath, at least, does not persuade me that they do.