The definition of a couple is elastic in the Barbican’s ‘Modern Couples’ exhibition. Tracking the role of collaboration and creative influence, the show brings together more than 40 artistic partnerships active during the first half of the 20th century. Some ‘couples’ include more than two people; some are not romantic in nature; and some fluctuate in nature. With around 600 items including books, letters and snapshots on show, the exhibition offers an alternative history of the Modern period, told through the relationships between artists rather than as a series of heroic tales. This often involves recasting the muse as a collaborator, but it is also about making visible the cross-fertilization of ideas between pairs working within larger groups. The show surveys a range of media, from the photographic experiments of Lucia Moholy and László Moholy-Nagy, to Virginia Woolf and Leonard Woolf’s experiments in publishing with the Hogarth Press, or the interiors made by Eileen Gray and Jean Badovici, who are described in a delightfully ambiguous turn of phrase as ‘friends or possibly lovers’.

Moving through the exhibition’s network of small galleries, densely populated with works hung on dark painted walls, feels a little like entering private spaces the artists might at some point have occupied – if such spaces had also featured lengthy explanatory wall texts. The stories they tell are new and enlightened versions of hackneyed accounts of male genius and female bewitchment, and in many cases they provide a corrective to heteronormative and patriarchal cultural fantasies. The well-known romance between photographer Dora Maar and Pablo Picasso, whose relationship lasted 1936–43, is retold to emphasize the artistic influence of Maar’s surrealist photography on Picasso’s painting. The playful, sexy photographs of the American collective PaJaMa, shot on the beaches of Fire Island and Provincetown, are shown here for the first time in the UK. Formed in 1937 and working together until 1950, PaJaMa took its name from its members Paul Cadmus, Jared French and Margaret French, whose polyamorous relationship was as imaginative as their work: first Paul and Jared were lovers, then Jared married Margaret and maintained a sexual relationship with both of them.

The exhibition includes a wealth of works made individually during the time of the artists’ relationships, shown alongside biographical accounts of their collaborations. This makes works that are attributed to more than one person stand out as exemplars of creative collaboration, for example, Leonora Carrington and Max Ernst’s co-authored painting La Rencontre (The Encounter, c.1939) in which the artists’ distinct styles seem to have been magically synthesized so as to transcend their individual aesthetics.

‘Modern Couples’ makes much of desire and romantic love as the driving forces in artists’ collaborations; more than one relationship is described as being the result of some ‘intoxication’. The section ‘Mad Love’ brings together dozens of books, drawings, photographs and poetry by Surrealists in a large vitrine, showing how the relationships of collaboration are also dependent on more complex communal networks. In the ‘Mad Love’ glass tank, art and theory breathe the same air, as Jacqueline Lamba and André Breton’s painted playing cards sit cheek by jowl with Dr Grace Pailthorpe’s essay ‘The Scientific Aspect of Surrealism’ (1938–39), which argued for surrealist art’s capacity to bring unconscious memories to the surface and heal people.

For more than three decades, from 1935 to her death in 1971, Pailthorpe collaborated with painter Reuben Mednikoff. Their relationship is explored in the fascinating exhibition ‘A Tale of Mother’s Bones’ at the De La Warr Pavilion in Bexhill, close to the pair’s residence during the latter part of their lives. The largest presentation of Pailthorpe and Mednikoff’s work in two decades, the exhibition is the result of two years of archival research by Dr Hope Wolf of the University of Sussex, who has curated the show with De La Warr head of exhibitions Rosie Cooper, and Martin Clark and Gina Buenfeld from Camden Arts Centre, where the show will be presented next spring.

If the Barbican does a fantastic job of introducing a great number of creative collaborations, this exhibition zooms in on one couple, bringing together the many paintings, analytical notes, photographs and archival material produced to offer a deeper insight into a creative and intellectual relationship in which the process of creating art went in parallel to that of creating new ideas. Pailthorpe brought her experience as a surgeon in the First World War, her training in psychoanalysis and her pioneering work with women in prisons; Mednikoff, 23 years her junior, brought his artistic training from St Martin’s School of Art.

Guided by Pailthorpe’s interest in psychoanalysis, their joint work focused on the experiences of birth and infancy, and the influence these had on an individual’s life and in society as a whole. Pailthorpe was convinced that art could provide a direct route to the unconscious, allowing the patient and the analyst to skip over long drawn-out Freudian processes. The duo’s art became a means to test Pailthorpe’s hypothesis that violence in society, along with what she called ‘the virus of hate’, resulted from unresolved issues in infancy.

Their collaboration also reveals an obsession with the mother figure, designated as ‘M’ in their notes – the initial was also Mednikoff’s nickname for Pailthorpe. Practicing a form of automatic painting and writing, the two would work without editing, and immediately analyse what they had made, writing notes on the backs of paintings. Their style was visceral and dreamlike, with imagery suggestive of foetuses and underwater plants, and with chimeric or cartoonish apparitions populating the picture plane. Pieces were often titled after the date they were made, and the artists were prolific: five of the works shown in a cluster at the De La Warr Pavilion were made in as many days. Sometimes their paintings would veer into an allegorical mode, responding to such things as the rise of fascism or the Second World War – as in Mednikoff’s colourful drawing September 6, 1941 (Tragic Story), in which a monster with a toothy horned head and a single blue nipple is bitten by a smaller four-legged beast.

‘A Tale of Mother’s Bones’ casts a welcome light on the separate developments of Pailthorpe and Mednikoff as well as their growth together. This is most clear in their ongoing exchange of knowledge and skills: Pailthorpe’s technical ability as a painter gets sharper as the years go by, while Mednikoff adopts the mantle of the professional analyst in studying her paintings. Throughout their 36-year-long collaboration they supported each other to grow and learn, an attitude that is evident from their very first moments together, and which this exhibition makes beautifully clear. In the analytical inscription on the back of Pailthorpe’s earliest painting in the show, May 23, 1935 (Pathway Through Fields), Mednikoff writes a touching and encouraging note that her ‘fear of the medium is slowly vanishing.’

‘Modern Couples: Art, Intimacy and the Avant-garde’ runs at the Barbican Art Gallery, London, until 27 January 2019. 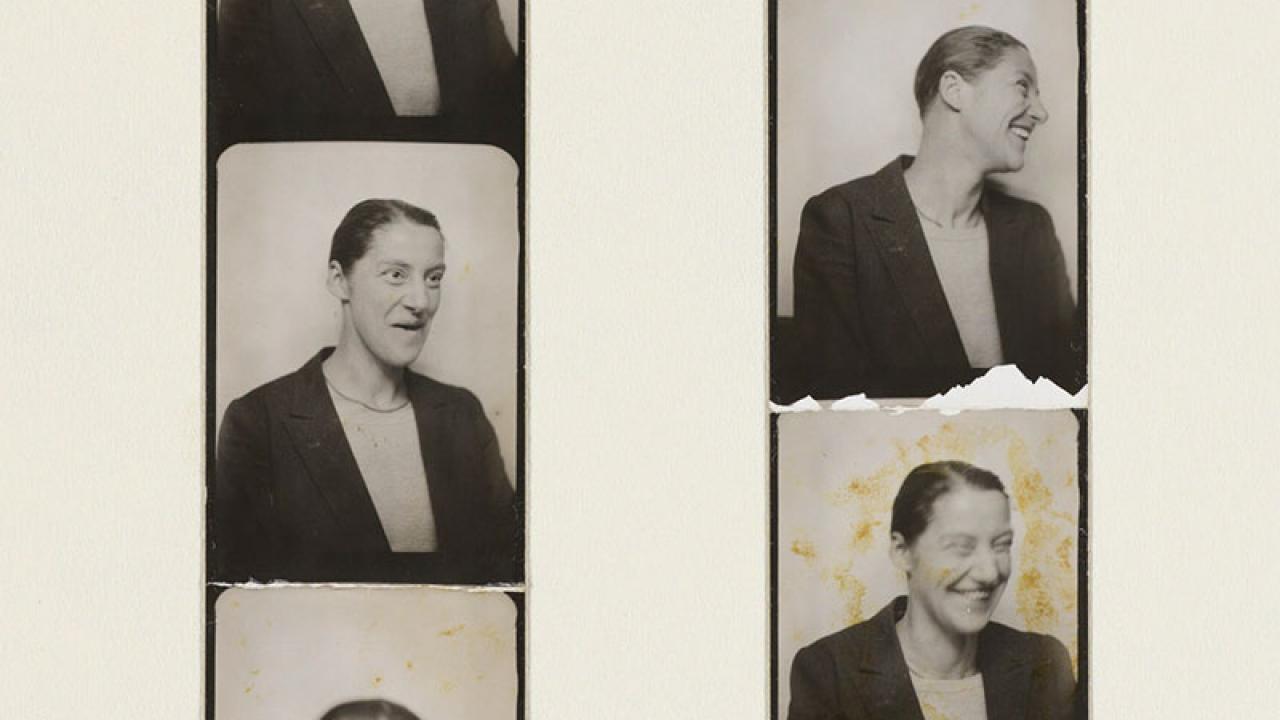 Profiles
A Collar, A Tie and an Eton Crop: Who Was Nancy Morris?