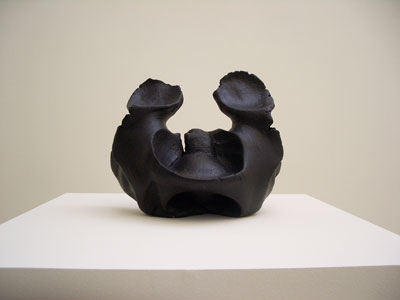 From his already iconic, slimmed-down Citroën DS (La D.S., 1993) to his seemingly improvised supermarket installation of watermelons and cat-food tins (Cats and Watermelons, 1992), the swooping organic forms of the ‘Spume’ sculptures (2003) and a hand-sculpted terracotta heart (My Hands Are My Heart, 1991), Gabriel Orozco’s creations are elegant and even entrancing. If the vast majority of art-critical writing today is loosely Hegelian – that is, concerned with situating the work in its socio–historical context and the ongoing narrative of art history, however multiple and fractured this may be – when faced with Orozco’s creations, one is tempted to render a Kantian aesthetic judgement: the work is, quite simply, beautiful. ‘Samurai Tree’ (2005–6) is one of the most visually stunning art works of the last decade. Jean-François Lyotard famously rehabilitated the Kantian notion of the sublime in the 1980s and ’90s, transforming it to serve a certain critique of representation and a Modernist-Postmodernist programme of transcendence. For those currently advocating a ‘return to the aesthetic’, rethinking the notions of taste and aesthetic pleasure in the wake of the anti-aesthetics of shock, ugliness and indifference, Orozco’s work is a good place to start.
Known for his versatility and use of diverse media – including painting, photography, video and sculpture – Orozco has created a substantial body of work that seems to exemplify today’s post-medium condition, in which a mixing or confusion of different artistic supports replaces classical Modernist concerns of medium-specificity. The paintings in his ‘Samurai Tree’ series are a case in point: geometric designs of half- and quarter-circles, constructed according to rules of size and colour, are based on the leaping L-shaped movement of the knight in chess, which itself represents three-dimensionality in two-dimensional space. An accompanying video presents the drawings’ different permutations. In this way the flat, immobile picture plane is refracted through a kind of conceptual depth and the virtual possibility of movement and animation.

Likewise, Orozco’s new series ‘Dépliages’ (Unfoldings, 2007) moves between object and image, sculpture and painting. As the artist states: ‘There is a circular movement between an object and a picture, folded and unfolded.’ The works are almost childishly simple. A blob of paint is squeezed onto a square sheet of paper, which is then folded up and pressed with fingers or a spatula, causing the pigment to spread out and circulate. The unfolded image, however, seems far from a haphazard splotch, appearing instead highly composed and immaculately framed. As with ‘Samurai Tree’, we get the sense of a meticulous process, consisting of an experiment with a formal matrix and its possibilities. The colours are rich and often lyrical: burnt red evocative of stained glass; blue like a bucket of pale rainwater; muddy mushroom browns. Orozco’s technique makes one think of Rorschach blots, and the abstract figures do invite contemplative and perhaps revealing free associations. If we take the test, the standard Freudian response is not long in coming. Sex is everywhere. From the bow of the legs to the curve of the hips, from the folds of the female sex to languid penises, the shapes of ‘Dépliages’ cannot help but appear as abstract and highly stylized bodily portraiture. The delicate lines evoke subtle epidermal patterns; the texture of the pigment is inviting to the touch. A quartet of ghostly black and white tableaux gives the distinct impression of painterly X-rays, seeing through to the bone. This corporal reference is further underlined by Orozco’s Torso (2007), a shapely mass made out of a quantity of clay equivalent to the artist’s weight, Pelvis (2007), another sensual clay creation, and Corner Face or Face Imprint (made in 1993 but shown here publicly for the first time), an imprint of the artist’s visage in a corner of the gallery. Jean Cocteau once joked that if, according to the psychoanalytic cliché, the dream of a train going through a tunnel signifies a desire for sexual penetration, then perhaps dreaming about sex means that you really want to be in a train passing through a tunnel. We could similarly infer that if the abstract prints of Orozco’s ‘Dépliages’ conjure the body’s sexual forms, the more directly bodily works open instead onto a realm of pure abstraction.