The Geometry of Hope 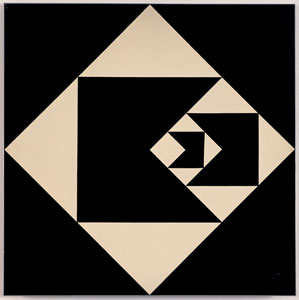 Few exhibitions drawn from a single collection can hope to have the depth and impact of this fruitful presentation, organized by the Blanton Museum of Art in Austin, Texas, where the show originated last year. It brought together geometric abstractions by artists working in South America from the 1930s to the 1970s. From the first glimpse of a sunny, two-tone yellow construction by Hélio Oiticica, which beckoned from the gallery’s entrance – where it hung somewhat unfortunately like a 3-D corporate logo – ‘The Geometry of Hope: Latin American Abstract Art from the Patricia Phelps de Cisneros Collection’ was chock-a-block full of visual revelations. It did for mid-century Latin American abstract art what last season’s ‘High Times, Hard Times’ exhibition did for New York painting of the 1960s and ’70s, prompting a reconsideration of a neglected branch of art history and showing us all a good time along the way.

Intermittently jazzy and austere, sensual and measured, the paintings, sculpture and works on paper vibrantly chronicled five decades of fertile intellectual inquiry and energetic artistic output in six cosmopolitan cities, all of which flourished as mid-century beacons of industry and urban development: Montevideo, Buenos Aires, São Paulo, Rio de Janeiro, Caracas and Paris. Paris, you say? Yes, that’s right. The show’s organizers took the liberal but interesting position that it deserved honorary inclusion, having served as a home from home for Jesús Rafael de Soto, Carlos Cruz-Diez and others engaged in the early percolations of the Kinetic art movement.

It’s a stretch, but the émigré and expat cultural flow between Europe and South America is one of the show’s constant refrains, beginning with Montevideo-born Joaquín Torres García, who lived abroad for four decades before returning home in the late 1930s. He formulated and taught his own theoretical system, ‘Constructive Universalism’, which merged his pal Piet Mondrian’s Modernist grid with signs and symbols from his hometown, applied in broad painterly strokes. The resulting pictograms presaged – and may have influenced – the work of Adolph Gottlieb.

But Torres García’s impact seems to have been otherwise limited to his countryfolk; his works, such as Composición constructiva 16 (Constructive Composition 16, 1943), offer an almost sentimental counterpoint to the hard-boiled works of the artists of 1940s’ Buenos Aires and the Arte Concreta movement of 1950s’ São Paulo. Although these two scenes developed years and miles apart, they shared certain similarities: grandly Utopian visions of abstract art’s progressive potential, dominant personalities, feudal schisms, shifting alliances, arch-rivals – all in all, a rigorous dedication to Formalism played out with telenovela-esque flair.

In Buenos Aires members of the Marxist collective Asociación Arte Concreto–Invención and Arte Madí sought to eliminate pictorial illusion from their art, unsatisfied with the strides made by the De Stijl artists and the Russian Constructivists. Their revolutionary notions generated modest, beguiling paintings such as Juan Melé’s Marco recortado n.° 2 (Irregular Frame No. 2, 1946), a jaunty, asymmetrical grid of greens, maroon and ochre that looks as though it could have been a joint production of Mondrian and Elizabeth Murray.

Among the show’s high points is Idèia visível (Visible Idea, 1956), a pair of interlocking spiral shell shapes painted on a fire-engine red canvas by Waldemar Cordiero, the pugnacious, self-appointed leader of the São Paulo-based Arte Concreto group. The paulistanos – many of whom subsidized their art practices with day jobs as designers, architects and chemists – went in for Euclidean geometry and bold colours in their ultra-rational pursuit of pure, two-dimensional visuality. Striking paintings by Judith Laund and elegant works by Geraldo de Barros confirm the movement’s vitality, despite the fact that it was largely eclipsed by the visually pleasurable abstractions of Rio de Janeiro-based Neo-Concretists such as Oiticica and Lygia Clark, both of whom made the watershed journey from two-dimensional works to interactive sculpture. Geometric abstraction has never been cuter or cuddlier than in Clark’s pair of Bichos (Critters, 1960 and 1961) – small, changeable aluminium origami-esque objects that the spectator could (once upon a time) pick up and rework.

For sheer razzle-dazzle, nothing in the show tops the works by the Caracas-based artists, from the optical experiments of Soto and Cruz-Diez to the fantastic wire ‘Drawings without Paper’ of Gego (Gertrude Goldschmidt). Standing in front of any work by Soto, such as his Doble transparencia (Double Transparency, 1956), a striped painting on layered Perspex that wreaks pleasurable havoc on the eye, is an addictive experience. I couldn’t help but wish for a more comprehensive look at his energetic and optimistic art – and perhaps that kind of aesthetic appetite-whetting will be one of the lasting effects of ‘The Geometry of Hope’.