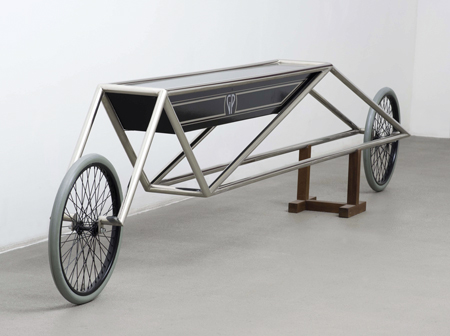 Simple forms – large triangles or rectangles in various three-dimensional combinations – stand directly on the floor or hang from the walls. Architectural elements reduced to abstract shapes are coated with opalescent lacquer. Bizarre, careening, aerodynamic forms daubed in metallic paint sit alongside the nickel-plated chassis of imaginary vehicles, whose elongated profiles recall the golden age of streamline moderne. The atmosphere is rarefied, static: every element stands alone, detached from its environment, inhabiting its own indeterminate temporality.

A single visit to this retrospective of Gianni Piacentino’s work at the Fondazione Giuliani in Rome would suffice to convey the unique genius of one of the greatest maverick talents of Italian art to have emerged in the past 50 years. Governed by a tenacious allegiance to his chosen areas of investigation, an uncompromising precision in execution and a resistance to historical classifications, Piacentino’s practice has only recently been revisited in greater critical depth and contextualized within a broader international perspective – thanks, in great part, to the monograph edited by Andrea Bellini, which was published to coincide with an exhibition at the Centre d’Art Contemporain, Geneva, in 2013.

In 1966, at the age of only 21, Piacentino participated in the group show ‘Arte Abitabile’ (Habitable Art), which also included Piero Gilardi and Michelangelo Pistoletto, at the Gian Enzo Sperone Gallery in Turin. From the outset, Piacentino’s focus on colour, geometric precision and restrained expressivity, combined with his use of symbols and abstract forms, resulted in work that was a hybrid of design, painting and sculpture, rendering it not only unique in Italy at that time, but also independent from the influx of American minimalism to which it has often been compared. Building on the deconstruction of the traditional painting devices proposed by Giulio Paolini, as well as on Pistoletto’s Oggetti in meno (Minus Objects, 1965–66), which played with eclectic construction processes and the notion of subtraction, Piacentino’s practice displayed some notable correlations to a number of Alighiero Boetti’s works from 1966–67 – Scala (Stairs), Porte (Doors) and Mancorrente (Handrails), for example – but stood apart from the structuralist, Gestalt-based approach being explored at the time by artists such as Robert Morris and Donald Judd.

Piacentino sought to realize objects in which symbolic form retained a connection to the everyday, where the skilled craftsmanship of the hand-finishing contrasted with the industrial processes typically associated with minimalism. While works such as Dull violet inclined window object (1967–68) or Red-purple rectangle-triangle (1966–67) could possibly be aligned to the practices of minimalist ‘heretics’ like John McCracken and Richard Artschwager, they lack the former’s tension between objecthood and the transcendental, or the latter’s playful approach to quotation and distortion. (Piacentino’s titles, which are simultaneously detailed yet enigmatic, are always given in English.) The artist’s early pieces offer themselves as definitive syntheses of form and colour that, denuded of practical application, have been rendered pure and replete with potential. As the artist wrote in 1968, these works constitute a presence that restores ‘the sense of concrete perception, action and “useless” thought. These are inconsumable art works: pure abstract thought combined with pure concrete action. In between there is no ideology, no poetry, no dialectic: only a “psychic whole”.’

Alongside fellow artists Gilardi, Paolini and Luciano Fabro, Piacentino was referred to in Boetti’s celebrated Manifesto of 1967 – the same year in which the critic Germano Celant first coined the term ‘arte povera’. The exhibition ‘Arte Povera + Azioni Povere’, held in the autumn of 1968 in Amalfi, marked the end of Piacentino’s short-lived involvement with the arte povera group. From 1969, he started to develop a more personal strand in his practice, one that he continues to pursue today and for which he is now probably better known: his two- or three-wheeled vehicles. Often reduced to rudimentary outlines and lacking a practical function, these objects appear simultaneously ultramodern yet outmoded, reverberating with distant echoes of futurism. Evoking the curved contours of art deco and style paquebot, Piacentino imbues the works’ mechanical elements – inspired by 1930s and ’40s cars, motorbikes and planes – with an enigmatic quality, amplified by his use of chrome and intense iridescent metallic hues. The works are often marked with his monogram ‘GP’, the artist’s signature transformed into the logo of an imaginary motor company, as for example on Nickel plated frame vehicle with black tank II (1971).

Piacentino’s fascination with all things mechanical is not only reflected in his passion for motorsports, his love of aerodynamic forms and his collections of thematic scale models and stamps; he is also interested in the technical intricacies of the mechanical components he appropriates in his work as well as in their decorative potential. In this respect, it’s possible to identify points of confluence between Piacentino’s later practice and certain works by the Belgian artist Panamarenko. However, while both artists share an enthusiasm for flight, speed and the modernist aesthetic, Piacentino doesn’t adopt the same visionary, pseudoscientific approach to his work as Panamarenko. By reclaiming templates from an age of pre-industrial design, promoting skilled craftsmanship and embracing a candidly anti-emotional objectivity, Piacentino’s works comprise a ‘mechanic and heroic cosmogony’ – as Bellini has termed it – an allegorical archaeology of modern technology through which to explore in depth the very nature of individual artistic interpretation, and its capacity for symbolic regeneration.