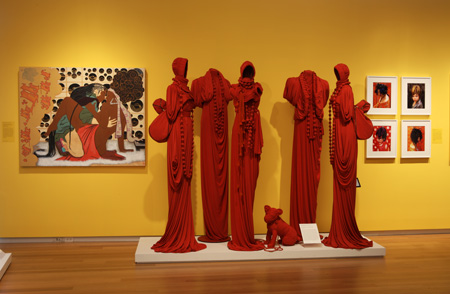 Many have pondered the validity of an African aesthetic: what was evident to early western Modernists is now a disputed issue in many academic and cultural circles. Presented at the Museum of Arts and Design, ‘The Global Africa Project’ lets the audience decide. Even the curators, Leslie King-Hammond and Lowery Sims, state that a ‘global Africa’ is a problematic notion, a stereotype waiting to be discredited. Their intent is to present a forum to engage discourse.

The result is as intriguing as it is challenging. An eclectic mix, the exhibition offers a miscellany of works by professional designers, artisans and community workers. King-Hammond and Sims have constructed categories that allegedly clarify – but in actuality add – complexity to a body of work that is hard to group. Rather than discuss elements of design according to disciplines, curatorial expertise is used to create categories such as branding, intersecting cultures, competing globally and locally, sourcing locally and transforming traditions. (An attempt to redirect Western tendencies in addressing the plastic arts?) In the catalogue we are given brief descriptions of works and loose arguments about why they were chosen. Notable are efforts by women who create pottery and basketry and material culture items such as jewellery, beadwork, fashion headpieces and adornments. Works employing industrial design such as an aerodynamic Perspex chair, Secret Meeting (2006) by Alexandre Arrechea, are stimulating but do not compare with the intricate embellished beaded teapot of Joyce Scott, Serge Mouangue’s serene kimonos based on cotton/silk wax print designs (Wafrica, 2008), or the lusty, sepia-toned painting of intertwined lovers by Iona Rozeal Brown. The real delight in viewing this exhibition is the individual pieces clamouring for attention.

The paradox inherent to this show’s eclectism is the attempt to survey a continent that is sometimes defined by its nomadic presence indicative of the diaspora. Certainly there is a strong argument for the retention of traditional precepts, attitudes and practices within these dispersed communities, given an overlapping history of four centuries and the global dominance of African-American pop culture. In fact, a principle category delineated by the curators – ‘Intersecting Cultures’ – is an essential premise in looking at any contemporary African aesthetic: the fluidity with which various notions of modernity are combined with traditional formulas. Even European and white Americans whose aesthetic is informed by things African are included in a major way. It is interesting that the curators acknowledge a heterogeneous thread that links other cultural groups when discussing an African aesthetic, even when inclusiveness is not usually part of the agenda in discussions of contemporary art in general.

As a survey exhibition, the surface is skimmed on many levels. Are artisans and designers from the African continent not enough to take centre stage? Or are those with distant and Romantic ties to Africa in need of validation? In an attempt not to generalize about an African aesthetic, there are significant arguments in support of including artists who have not visited the continent or lived there, but who use African elements in their work. In her catalogue essay, Judith Bettelheim discusses masquerading traditions that have retained an expressive use of materials, the confluence of patterns and design and the significance of spectacle. Sonya Clark, for example, who has studied the material culture and philosophy of the Yoruba, creates head and neckpieces that reflect her understanding of key Ifa precepts. A fairly recent development is the use of recycled materials, but has that not always been an indigenous African tendency? Masking traditions are kept contemporary because of materials used to construct the costumes; notable contemporary African artists like Willie Bester and El Anatsui use commercial discards from factories, cars and assorted detritus revealing a fluid connection between traditions and modernity. Futurism is represented in the space-age design of Kossi Assou’s triangular, low-sitting table, replete with chairs and aluminium bowls (Triangle Table, 2003). Everything in this piece is stripped to the bare essentials like a post-apocalyptic dining scene.

Humanistic dimensions and bricolage take precedence over aerodynamic design. For example, the Mud Studio’s chandeliers of clay, crystals and steel wire are opulent renditions of 19th-century Empire-style fixtures, while the Willowlamp collective constructs a futuristic light-piece based on a geometric floral motif. Of note is a light fixture by Heath Nash made of recycled detergent bottles. Form and function merge in the section of the exhibition titled ‘Competing Globally,’ in the furniture designs of Billy Omabecho and in ‘Transforming Traditions’, the ‘Nguni Vessel’ (2005) by Clive Sithole stands out.

Painting, photography and some sculpture are represented. However, even if the stellar works by Kehinde Wiley and Odili Odita help punctuate salient ideas presented in the catalogue, works by Fred Wilson, Iké Udé and Chakaia Booker veer toward a trajectory that needs more in-depth explanation. Co-existing side by side is every approach to art-making imaginable from the conceptual ideations of space represented in Alice Yard to architectural interventions and community-based design and modes of production.

So what is a Global Africa? This exhibition, with its investigation of colour, texture and form, provides merely a glimpse, albeit an exciting one, of the complexity of the continent’s aesthetic.

AM Weaver is a writer and curator based in Philadelphia, USA.