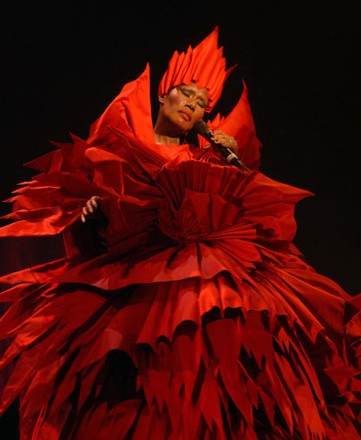 After an absence of 20 years, Grace Jones returned to New York for a single show at the Hammerstein Ballroom last week. Following last year’s release of the well-received Hurricane (her tenth album), Jones toured extensively in Europe. But at the Hammerstein, she dramatically raised her own bar. Collaborating with acclaimed costume designer Eiko Ishioka (who, most recently, designed the costumes for the opening of the 2008 Beijing Olympics), Jones turned in a performance that captured the essential act of self-imagining for which she became famous more than 30 years ago.

The curtain went up to reveal a monolithic tower draped in shimmering silver cloth. Slowly, the form began to tremble. As a piece of calculated perversity, concealing the production’s primary asset for the duration of the opening song paid off spectacularly. At the end of the song – ‘This Is’ from Hurricane – Jones tossed the cloth off and was revealed in a costume (the first of several she wore throughout the night) that cut between cyberpunk and space-age tribalism. The precise lyric with which Jones revealed herself was ‘This is life!’ – as pithy a reduction of the resurrection myth as is likely to be achieved. In what was perhaps the most unexpected allusion in an evening of left-field references, it recalled the pivotal moment in the final act of Shakespeare’s The Winter’s Tale – not simply because it involved another statue come to life, but because it was indirectly a statement on the failed attempt to subjugate, silence, or otherwise still the woman who is too much alive.

The underlying agenda of the concert was thus clearly announced: a radical restaging of feminine sexuality, directed by two women aged 70 (Ishioka) and 58 (Jones). As such, it moved far beyond the now default reference to pornography; drawing from Kabuki, manga, art history and beyond, Ishioka instead created a more confrontational kind of eroticism.

The concert was founded on a melding of narrative, feminist manifesto and temporal dislocation, with Ishioka’s costumes cutting across time periods, grafting together artifacts from real histories and imagined futures. Similarly, judging from the ecstatic response they received, several of the songs from Jones’ new album – in particular ‘Corporate Cannibal’ and the title track – seem to have hurtled through time to become ready-made classics. (The songs on Hurricane have been circulated in surprisingly various ways: a 12” of remixes of ‘Williams Blood’ was popular when released late last year, while ‘Corporate Cannibal’ has recently been incorporated into installations and poetry readings by artist Karl Holmqvist.)

The costume Jones donned for ‘Corporate Cannibal’ was one of the highlights of the evening, featuring an Aztec skull mask, a silhouette straight out of Las Meninas and black-on-gold dollar signs. Inhabiting each costume, creating a discreet physical language for every individual song, Jones performed a panoply of characters in a single evening. Should we be in danger of forgetting: woman wears and inhabits a thousand different faces, and Jones is fearless enough to showcase those many moments of fracture and division.