Do the record prices being fetched at auction for design mean it should now be considered art? 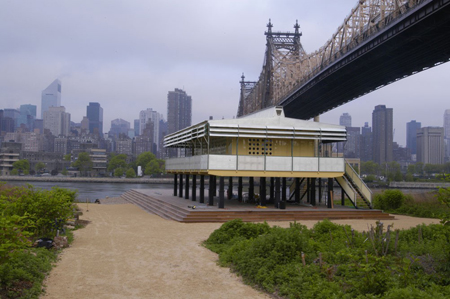 This spring André Balazs paid nearly five million dollars for Jean Prouvé’s Maison Tropicale, a prototype prefab that was designed as cheap housing for functionaries in France’s West African colonies. Although intended for mass production, the structure is one of only three that were made. Of the other two, one was retrieved, restored and donated to the Pompidou Centre, Paris, by the staunch Prouvé collector-turned-scholar Robert Rubin, and the other is said to be in the process of restoration. Balazs has acquired a fascinating object. Created in response to a competition initiated by General Charles de Gaulle in 1947, the three houses were completed in 1951. Constructed from aluminium panels assembled in situ, they were held safe from swampy ground by 15 stilts, cooled by gauze-protected vents and surrounded by a two-metre wooden slatted terrace. Had France’s last-guard colonialists been able to embrace exposed metal struts and grids of small porthole windows, the design might have been rolled out by the hundred. Rubin describes it as a ‘cross between a pagoda and a Greek temple’, its beauty being in ‘the arrangement and repetition of its elements’. Five million dollars is a quite a sum to get your head around, but the physical manifestation of a design idea of this significance is obviously worth something.

So, if design can fetch art prices, does that make it art? This may seem an unbelievably crude question, yet it is raised almost every time the press reports on design’s relatively new-found ability to attract six- and seven-figure sums. The underlying assumption is that price determines kind, suggesting a sorry passivity in the face of mammon. As private wealth grows, the cost of almost anything that can be privately owned and is in limited supply is driven up: art and design, sure, but property and Château d’Yquem too. Rather than art and design being unified by a price-tag, it is a case of all expensive possess-ions merging in an undifferentiated soup of luxury goods. The problem is not that things become expensive; it is that they are reduced to being expensive things.

Followers of design auctions over the last decade will not be surprised that the Maison Tropicale sold for millions. The trend for collecting 20th-century furniture was kicked off by an interest in mid-century modern designers such as Prouvé, Charlotte Perriand and Pierre Jeanneret. Burgeoning demand has rendered even mass-produced pieces such as school desks and storage systems rarities. The effect of this scarcity has been two-fold: first, rising auction prices for late 20th-century furniture – from 1950s’ and ’60s’ modern and Pop through ’70s’ and 1980s’ Postmodern to latter-day multifarious; and second, a new crop of limited editions aimed squarely at the same collectors. Some- times these two effects combine when living designers, having seen their work finding favour in auctions, come up with new gallery pieces in a perfectly understandable bid to cash in direct. While in 1981 Ettore Sottsass spurned the design group Alchimia for its focus on limited-edition, gallery-based production, earlier this year he declared that he now only makes pieces for The Gallery Mourmans in the Netherlands and Bruno Bischofberger in Switzerland.

Where Sottsass once got exercised about the gap between art and design, he now bothers himself with the shades between design and industrial design. What he is quite clear about, however, is that his work remains design, whether in galleries or not. He doesn’t subscribe to the price-point definition or to the blithe assertion on the part of certain galleries aiming to capitalize on design’s new collectability that distinctions have been effortlessly relegated to the past. It is possibly the most depressing side-effect of the new wealth-fuelled boundary-blurring that interesting and difficult questions about the shared territory between art and design are being swept aside. Where 80 years ago or so the unification of art and design was the fervent aim of the visionary Modernist, now it is the ill-considered corral of the opportunistic gallerist. At this point the arguments become very tricky. While it is quite clear that a high price doesn’t turn a Modernist prototype into a work of art, it is equally apparent that there is common ground between contemporary art and design. Good designers have always been self-aware and witty, but recent emphasis on criticality in design has, in some cases, put questions before objects. Meanwhile artists have long thought about mass-produced objects, but since the early 1990s there has been a significant strand of art that has taken design as its subject. What these two schools of work have in common is a source of ongoing debate.

In a recent interview one of the main practitioners of art-about-design, Jorge Pardo, insisted that he and his art colleagues were able to achieve a critical distance that was inaccessible to designers themselves. A fairly widespread view in art circles, this argument does not stand up to even the most cursory study of design’s more intelligent practitioners. Rather than being a case of distance versus lack of, it is a matter of representation and reality. Where art-about-design generates metaphors, design – however critical, radical or even impractical – offers proposals. Designers also address a distinct set of questions about form in connection to materials and methods of production. But this is a ridiculously swift tour of extremely uncertain terrain, and it does not bear directly on the question at hand. The point is that discussions of this sort tend to be conveniently swept aside when large sums of money heave into view. Of course, there is no reason why design shouldn’t be as expensive as art; the economic relationship between the two is the product of a series of historical accidents. And equally there is no reason why designers shouldn’t get to play with high-tech toys and lavish materials to produce expensive collectables. It is simply that things of this sort tend towards outsize inconsequentiality. As a general rule, and with a few notable exceptions, design’s limited editions are a side-show to the more pressing issues arising in the field. The only problem is that they amount to such a flashy side-show that they tend to obscure the main event, and what follows is the sad loss of any sense of context and history.